The rise and fall of football blooper videos: From Danny Baker to Olly Murs 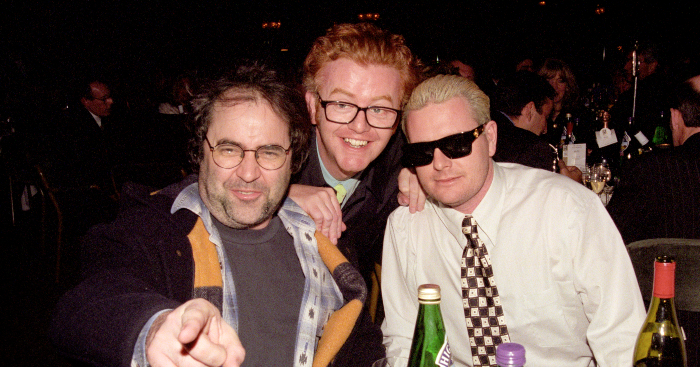 Long before Twitter, YouTube or even the internet existed, football fans had to go a bit further to get a glimpse of the ugly, and often amusing side, of the beautiful game.

Emerging in the heady days of VHS – ask your dad, kids – football blooper compilations were the video nasties of their day. There may not have been much blood and guts, but fans still watched them through their fingers, eliciting the occasional scream of delight or despair.

For two decades, these videos were the go-to Christmas gift for football lovers the world over.

Rarely a year would go by without someone in the family unwrapping a video featuring a familiar face from the world of sport or lad-orientated entertainment on the cover, grinning inanely alongside a time-specific brag about the action awaiting them (“65 minutes of football hilarity!”)

Over time, the emergence of online media saw these tapes usurped by fans with the technology at their fingertips to cut together clips of the latest in-game blunder and have them up online to watch and share before the referee had blown for the end of the half.

In fairness, it was long overdue. What had started as an edgy and authentic platform celebrating the lows that accompanied the highs of the beautiful game had become a soulless money-spinning enterprise lacking any real heart.

Still, it had been one hell of a journey and one that had started so promisingly all the way back in 1992.

Own Goals and Gaffs

That was the year ‘Danny Baker’s Own Goals and Gaffs’ first hit the shelves.

A popular presence on BBC Radio 5Live at the time, Baker fronted phone-in shows like 606, where his knowledge of football and passion for unfashionable Millwall made him the perfect pick to front a video which was designed as an antidote to the pedestrian tapes being trotted out by clubs at the time.

“For the first time, here is football as we, the supporters, know it,” the blurb accompanying the tape declared. “This is the truth they hide from prospective sponsors. Cock-ups, own goals, defenders with brainstorms, stunned faces in the crowd, unbelievable incidents.”

With clips sorted by a particular theme, it was Baker’s job to introduce them with a little wit and wisdom about football in its many forms. Though he would occasionally interject clips with comedic asides, he also knew when to keep schtum and let the bloopers do the talking.

Yet ‘Danny Baker’s Own Goals and Gaffs’ wasn’t alone in signalling the start of an exciting new era for home entertainment and football.

Later that year, ‘Vinnie Jones’ Soccer’s Hard Men’ was released to much uproar – though not the good kind.

Like ‘Own Goals and Gaffs’, it sought to defy the sedate image of football on VHS at the time, offering up a savage two fingers to the establishment in the process.

It was a celebration of aggression, featuring tough tackles and unsavoury incidents involving the likes of Graeme Souness, Bryan Robson and Billy Bremner.

It also led to a £20,000 fine and suspended six-month ban from all football for Jones, who stood accused of bringing the game into disrepute.

The truth, however, was that much of what Jones presented on the tape was exactly that: the truth.

Whether it was challenges that bordered on assault or Jones’ description of the various ‘hard man’ tactics he used to intimidate opponents – the authorities were well aware of these kinds of antics.

And while Jones’ approach landed him a hefty fine and a warning over his conduct, ‘Soccer’s Hard Men’ ended up being second-best selling sports video in the run-up to Christmas of that year.

There would be no follow-up – Jones wouldn’t return to the small screen again until ‘Lock, Stock and Two Smoking Barrels’ – but it was clear that an interest and market for football content outside of the mainstream was certainly there.

Nineteen-ninety-three saw Baker return to the fore for what was, essentially, his difficult second album.

Instead, he settled on something different.

‘Danny Baker’s Right Hammerings’ was a collection of “absurdly one-sided affairs that should result in the losing side receiving a suspension for being so utterly rubbish, and leave you wondering how on Earth they manage to sell even a single ticket for their next game.”

It was a fine effort and an inventive way to highlight another forgotten facet of football for many fans: being on the end of a thrashing.

But, for whatever reason, it became a digression rather than progression for the franchise with Baker returning to the original formula in 1994 with ‘Own Goals and Gaffs 2’.

Any previous concerns about going over old ground soon appeared with the compilation failing to hit the same heights due to weaker clips and, similarly, weaker quips from Baker himself.

By the time 1995’s ‘Fabulous World of Freak Football’ arrived, it was clear Baker had run out of steam, whether it was the bizarre title or equally weird cover featuring a black and white shot of Baker wearing pigtails, it was time for a change.

That change came courtesy of Nick Hancock, a comedian and football fan who had shown a flair for the funny as the host of BBC One’s new sports-based comedy panel show ‘They Think It’s All Over’.

It proved a shrewd move. ‘Nick Hancock’s Football Nightmares’ was a return to form, with Hancock’s dry style, knowledge of the game and love of Stoke City adding a fresh dimension to what was becoming a tried-and-tested formula of OGs and players falling over.

The sequels got a little more creative too, though with mixed results. It was one extreme to the other, with Hancock dressing up as the devil for the Biblically themed ‘Nick Hancock’s Football Hell’ before doubling down on the banter and double entendres with ‘Nick Hancock: Football Doctor’, which featured Page Three-star Linsey Dawn McKenzie in a state of undress quite possibly not suited to a video given to children at Christmas.

Not that it mattered all that much, with the lack of available football action elsewhere ensuring there was plenty of demand for these tapes and DVDs come December. What could possibly go wrong?

Quite a bit actually. Hancock’s departure in the early 2000s coupled with the arrival of his ‘They Think It’s All Over’ co-star Rory McGrath for a series of laugh-free efforts released under the ‘Own Goals and Gaffs’ banner should have been the beginning of the end. But it wasn’t.

The decision to press ahead with the release of ‘Big Ron’s Mad Managers’ – a compilation fronted by Ron Atkinson six months after he used the N-word to described Marcel Desailly – really should have been the beginning of the end. But, again, it wasn’t.

Instead, the format lumbered on, finally taking inspiration from ‘Vinnie Jone’s Soccer’s Hard Men’ with a series of releases fronted by ex-pros.

There was David Seaman’s 2004 effort ‘Jeepers Keepers’ – an attempt to make light of his Brazil World Cup blunder as well as a play on the title of the horror blockbuster ‘Jeepers Creepers’.

Ian Wright's 'It Shouldn't Happen To A Footballer' DVD, made up entirely of footballers…playing football.

Yet, unintentionally amusing titles aside, these efforts and countless lifeless efforts fronted by players failed to capture what made Jones’ so great.

Rather than offer insight and advice alongside clips, they saw the footballers involved delivering stale cliches with the air or someone who may or may not have actually watched the preceding blunder.

The blunders themselves, meanwhile, were no longer as fresh as before – there were only so many times you could laugh at the sight of Chris Brass scoring an own goal after booting the ball into his own face.

There were occasional exceptions to the ex-pro rule, of course.

‘Ally McCoist’s Trial and Error’ remains an extraordinary piece of work, which saw the Rangers legend game for a laugh, playing multiple parts across a court room in a mock trial which interspersed the football clips.

Try to imagine James McAvoy’s performance in ‘Split’ interspersed with clips of Lee Dixon accidentally lobbing his own keeper from 30 yards. It’s every bit as bizarre and brilliant as it sounds.

Things were heading to hell in a handcart as we entered the 2010s with the descent only quickened by a spate of cockney hooligan-centric efforts fronted by celebrity West Ham fans like Ray Winstone, Danny Dyer and Phil ‘Parklife’ Daniels.

All quality control had gone out of the window at this point in favour of churning out an increasingly tired and uninspired format featuring all the old familiar clips alongside a few new and considerably less amusing ones..

Soon, people with no discernible link to football and only a passing appreciation for it were getting involved.

‘Gordon Ramsey’s Football Hell’ left a particularly bad taste in the mouth while the less said about ‘Piers Morgan’s The Good, The Gaffe and The Ugly’ the better.

Confirmation that the genre had sunk to the lowest of lows came with ‘Olly Murs’ 7 Deadly Sins of Football’, a DVD fronted by a man with no business being a pop star, let alone someone involved in football.

Even so, the cash cow was only finally milked dry in 2016, the first year in which no new football blooper DVDs arrived to ruin someone’s Christmas.

The decline of physical media, meanwhile, means it is unlikely we’ll ever see the likes of Danny Baker’s ‘Own Goals & Gaffs’ again – but there is hope.

Thanks to YouTube, many of these classic tapes live on, in grainy VHS format available to watch right now, should you wish to.