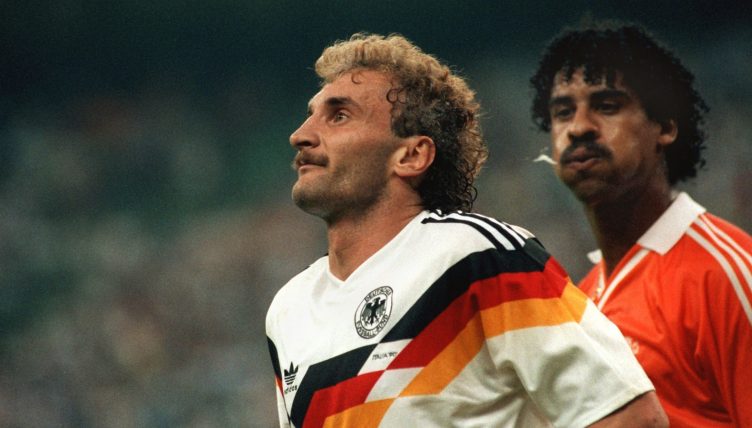 It must be frustrating to be Rudi Voller. Over 300 goals for club and country. A career excelling at the very highest level. But also probably the best player ever with such a penchant for always being overshadowed.

He scored in a World Cup final, you know. The year was 1986 and as Germany toiled against Argentina, it was substitute Voller they turned to for salvation. And he nearly provided it too, scoring late on to bring the Germans level.

He won a World Cup final, you know. The year was 1990. Nessun Dorma and all that. For those that saw the tournament, it was unforgettable. Toto Schillaci’s wild Sicilian eyes, Roger Milla’s hips, Gazza’s tears.

So many stories, so much emotion crammed into four enthralling weeks of theatre. Except for the final. That was absolute dog shit. The Germans won 1-0 thanks to a dodgy penalty in a game no one remembers.

He played in a European Championships final, you know. The year was 1992 and Germany were red-hot favourites to win it. Rightly so. Opponents Denmark only entered the competition because of the political disintegration of Yugoslavia.

When your tournament qualification relies on the outbreak of war, genocide and ethnic cleansing, you’ve probably got no business winning it. But the Danes did.

And John Jensen, whose right foot was about as reliable as OJ Simpson’s alibi, scored, just to rub it in.

He even won the final game played at the old Wembley Stadium, you know. The year was 2000 and Voller was the managerial mastermind when Germany beat England in the last competitive game beneath the Twin Towers.

It was a historic moment for both him and German football, only to be promptly upstaged by Kevin Keegan resigning in the shitter.

In fact, outside of Deutschland if you mention the name Rudi Voller, none of this comes to mind. Instead, our only recollection is of a man trudging off the pitch, spit dangling from his shell-shocked visage. Like George Osborne exiting a food bank.

How did it all come to this?

Stepping out of the shadow

The San Siro was home from home for Frank Rijkaard. It was here that the Dutchman starred for Arrigo Sacchi’s formidable Milan side of the late Eighties.

Sweet Jesus, what a team. At the back, Billy Costacurta and Franco Baresi were about as welcoming as the guards at Broadmoor. Going forward you had Ruud Gullit and Marco van Basten in their pomp.

Then, in the middle, you had Rijkaard, pivoting defence and attack with near-perfect positional sense and an exquisite range of passing.

Twice he’d placed on the podium for the Ballon d’Or, losing out to Van Basten on both occasions. In fairness, that’s like coming second to Frank Sinatra in a karaoke contest. Sometimes there’s nothing you can do.

But 1990 was the year that the midfielder finally stole the spotlight from his peers. A serious injury to Ruud Gullit’s knee kept him out for nearly the entire season. Rijkaard stepped up to the plate, notching a sublime winner in the European Cup Final against Benfica.

He’d starred in Serie A for two seasons and now had his sights on the World Cup, which was conveniently on Italian soil. The stage was set for him to shine. Instead, he made headlines for making the most basic of human errors.

You don’t tug on Superman’s cape. You don’t pull the mask off the Lone Ranger. And you certainly don’t spit on a German’s mullet.

On a controversial June night in 1990, Frank Rijkaard entered football’s Hall of Shame with an act of spit-flinging shithousing that shocked the world.

Seeing red in the San Siro

We should have expected it really. Holland and Germany’s rivalry was hardly a secret. There were half-hearted attempts at cordiality – a bit like He-Man bumping into Skeletor in the post office – but it didn’t take much for the hatred to rise to the surface.

The teams entered the knockout stages of Italia ’90 in starkly contrasting form. The Germans had stormed the group stage, smashing 10 goals in three games, while Holland were mediocre, only scraping through to the knockout phase after three draws, including a desperate performance against Egypt.

Against the Germans, it was Rijkaard that let the side down. It started when a crude tackle on Voller earned him a deserved booking.

Initially, the Dutchman displayed the sort of incredulity Harry Redknapp reserves for the taxman. Then he lost his mind completely.

With the referee’s back turned, Rijkaard deposited a sly dollop of spittle on the German’s hair as he ran past. The tightness of Voller’s curls caused a crucial time delay between the moment of impact and his registering of the missile.

By the time he complained to the official, it was too late. He too was booked. Presumably for being a pain in the arse.

Tempers frayed again moments later. A melee in the Dutch goalmouth, in which Voller was clearly the injured party, saw both men sent off. The Marseille man was incredulous.

Just for good measure, Rijkaard gobbed at him again as they departed. This time the mid-air mucus was captured in glorious slow-motion as it landed on Voller’s ear.

That was the thing about Rijkaard. Even his gobbing was absolutely perfect. A dollop of phlegm dangled delightfully in the damp Milanese air, allowing the cameras to capture every second of its descent.

There was disgust in the TV studios. Sickening. Appalling. Revolting. The ITV pundits were testing their vocabularies to the very limits. Thankfully, Big Jack Charlton was there to restore order. “I’d have chinned him,” said the Irish boss.

By the time Voller returned to the dugout from the shower, his blow-dried curls more resplendent than Vera Duckworth after a trip to the salon, Germany had won 2-1 in a classic.

But no one was talking about the game itself. The incident remains a mainstay of any self-respecting Italia 90 montage. Indeed, despite Voller accepting his apology with good grace, Rijkaard was christened “the llama” by the unforgiving German press corps.

The aftermath: Things can only get butter

They say time is a great healer. In football, it’s TV adverts. Graham Taylor mocked his own catchphrase for Yellow Pages, while Gareth Southgate exorcised the ghosts of Euro 96 for Pizza Hut.

If anything could heal the divide between Voller and Rijkaard, we should have known it would be advertising. And in 1996, when the marketing men at Echte Butter brainstormed their next campaign they weren’t just worried about sales and ad revenue, they also wanted to make a humanitarian gesture by righting one of football’s great wrongs.

That’s how it came to be that the two adversaries were pictured in matching cream robes, sharing slices of toast on a resplendent spring morning. The image was captioned “Everything in butter again”, a reference to an old German proverb that sounds distinctly like one of Jamie Oliver’s brand pillars.

The protagonists donated their fees to charity and the hatchet was well and truly buried.

Frank Rijkaard and Rudi Völler share breakfast in an advert for a butter company, 1996. pic.twitter.com/nQKjmM33fz

The spat with Voller stains an otherwise impeccable and trophy-laden playing career, despite being widely acknowledged as one of the more pleasant and intelligent voices in the game.

It just goes to show that, as the old English proverb goes, cheating doesn’t make you a permanent shithouse. But it does make you a memorable one.

READ MORE: A definitive ranking of every World Cup since 1990 from worst to best