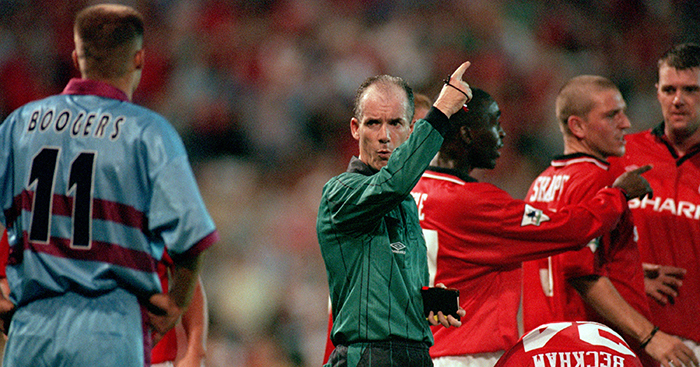 Marco Boogers. You remember him. Dutch striker. Voted one of the Premier League’s worst signings. Also, a bit of a shithouse, as @Sid_Lambert explains…

“He’s not that sort of lad, it’s totally out of character,” said a solemn Harry Redknapp as he stood in front of the TV cameras at Old Trafford in late August 1995.

His team had just suffered their second consecutive defeat of the season and sat comfortably in the bottom three, having narrowly avoided relegation the previous year.

But then again, he shouldn’t have been surprised…

The 90s was indeed a glorious time for tape-trading. At my school, it was a dog-eared copy of Under Siege which featured Baywatch’s curvaceous beauty Erika Eleniak jumping topless out of a birthday cake.

Similarly, Harry Redknapp resorted to VHS in his search for an impressive front pair. With Tony Cottee in need of a physical strike partner, the West Ham boss happened upon footage of a lad at Sparta Rotterdam who might fit the bill.

His 1998 autobiography revealed the full extent of his research into his new signing: “Someone sent me a tape of Boogers and urged me to watch it. I was very impressed.”

DONE DEAL: In the summer of 1995 West Ham signed Marco Boogers. He played 4 games, nearly killed @GNev2 and Harry Redknapp admitted that his research could have been better:

💬 “I signed him off a video. He was a good player, but a nutter. They didn’t show that on the video.” pic.twitter.com/V6vKYnMfdD

In the world of football scouting there’s an age-old maxim that you should never sign a player off video, just in case they’re shit. But Redknapp was desperate. He had very little time and very little money. So, despite his years of experience, he let the surge of excitement get the better of him. And on such lacklustre research, £800,000 of his transfer kitty was spent.

Looking back, it’s hard to know whether he dodged a bullet. If the West Ham boss had been sent a bootleg copy of When Saturday Comes, they could have started the season with Sean Bean up front.

From day one of pre-season, it became clear that the Hammers’ new striker wasn’t quite the one the fans had been promised. Boogers arrived with the sort of physique that gave Bob Geldof sleepless nights. He looked like he’d spent the summer on hunger strike, far from ready for the hurly-burly of Premier League football.

The West Ham medical, presumably undertaken using equipment supplied by Fisher-Price, failed to reveal that the Dutchman’s knee was held together by chewing gum and a piece of string.

Thus Boogers’ efforts ahead of the mid-August kick-off were distinctly unimpressive. He laboured in training – “lazy” and “amongst the stragglers at the back”, according to his new boss – and hadn’t come close to troubling the scorers in any of the friendlies.

With no money to find an alternative at short notice, Redknapp decided to start the season with Cottee up front on his own rather than exposing the world to his uninspiring new signing.

West Ham started the season at home to Leeds, toiling in the August heat while Tony Yeboah sizzled in a sensational winner for the visitors. Boogers made a brief foray into the action, but his lack of mobility was an immediate concern to those seeing him for the first time.

Doubtless it was this anti-climax that made the Dutchman even more motivated to make an impact on his second outing. He was substitute again for the trip to Old Trafford, where West Ham surprisingly put up a gritty showing.

Trailing 2-1 and clinging onto hope they could get an unlikely point, Redknapp decided to roll the dice. On went Boogers with notice to make a nuisance of himself. Or words to that effect.

The Dutchman’s limited English had been part of his struggle to adapt to his new lifestyle. Clearly he misinterpreted Harry’s genteel instructions and took it as carte blanche to maim Gary Neville.

Watching the tackle again is quite extraordinary viewing. The United full-back was set to curl a gentle ball forward then Boogers arrived from 10 yards out of shot, scything his target at ankle height and launching him into the damp Manchester air.

The aftermath was sensational. A young David Beckham – all skin, bone and Brylcreem – and Steve Bruce steamed into Boogers looking for immediate retribution.

Enter the world’s most unlikely peacekeeper: Julian Dicks. West Ham’s skipper didn’t have a particular affinity for Boogers, nor was he a willing devotee of the disciplinary rules of association football, but he certainly enjoyed a ruck. So when he saw Beckham and Bruce getting shirty, he steamrolled right into them.

The United pair retreated. Roy Keane entered the fray. A tense stand-off ensued. It’s the sort of stuff that  absolutely fucking everyone no one likes to see. And all the while Neville lay prone on the turf, eyes closed, hands clinging to his ankles just in case they disintegrate into dust.

Somewhere in the BBC studio Alan Hansen allowed himself a smug grin. A few days earlier, after a youthful United side started the season with a chastening 3-1 defeat at Villa, the Scottish pundit insisted: “You’ll never win anything with kids.”

And maybe he was right. These young players wouldn’t be up to the task. Especially if they’ve had their legs amputated.

Boogers received a four-match ban and would make only two further appearances in West Ham colours due to a combination of knee injuries and his heavily-pregnant wife’s chronic homesickness.

At one stage a doctor signed him off due to stress, and in the New Year he and his new family (his wife gave birth during his absence) returned home for good when the striker signed for Groningen on loan. Of course, they weren’t allowed to go quietly.

A misunderstanding between West Ham’s official ClubCall reporter, who said the family had travelled back to Holland “by car again”, and a tabloid journalist led to the infamous Sun headline ‘BARMY BOOGERS GONE TO LIVE IN A CARAVAN’.

The merest of fact-checking would have revealed that Boogers was neither (i) mentally unstable, nor (ii) living in a recreational vehicle. But never let the truth get in the way of a good story.

With his star signing gone, Redknapp sprung into action by recruiting Iain Dowie, whose arrival in the East End was about as popular as the Old Bill knocking on Ronnie and Reggie’s front door. The next season he would endure a 32-game scoring drought.

Despite Boogers’ failure, the West Ham boss remained undeterred in the foreign transfer market. Next summer in came Romania’s star striker Florin Raducioiu and, in the New Year, out went Florin Raducioiu. Lightning had struck twice in that part of east London.

His manager was quick to identify the problem. “He’s been used to queuing up for three hours in Bucharest for a loaf of bread, and suddenly he was wearing a £28,000 watch. Perhaps the transition was too much for him,” he said.

It was a curious appraisal, not least for the fact that Raducioiu had played for Brescia, Verona, Espanyol and the mighty AC Milan since leaving his homeland.

Boogers’ injury woes did eventually clear up and allow him a highly successful lower-tier career at hometown club FC Dordecht, where he later became sporting director. He remains a legendary figure in those parts.

Meanwhile, his legacy on these shores will always be one of the most appalling tackles in top-flight history, an infamous headline, and constant reference as one of the Premier League’s worst players.

The Shithouse Files: Ronald Koeman v England, when the ref bottled it