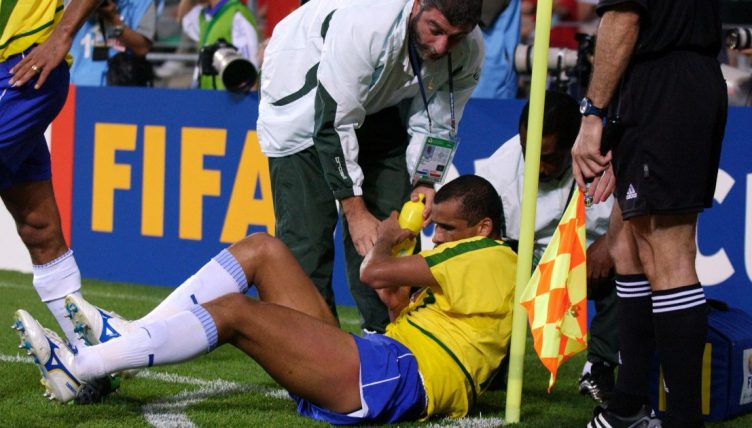 Rivaldo. You remember him. Left peg that could open a can of beans. Also, as @Sid_Lambert explains, a bit of shithouse.

Ask any football fan to list the best left foot in the business and, save for the most diehard Steve Guppy enthusiast, there’s a fair chance that somewhere along the line they’ll talk about Rivaldo.

The Brazilian’s story is fairytale stuff. A boy who grew up in the poorest of dirt-poor favelas, selling souvenirs to tourists then playing football into the twilight hours during the long gaps between meals. A boy whose severe malnutrition cost him his teeth and caused him to suffer bow-leggedness due to the lack of essential nutrients.

A boy who walked 15km to training because he couldn’t afford the bus. A boy whose father died in a car accident before he ever saw his son play professional football. A boy who blossomed into a footballer so gifted that Pele himself named him amongst the best 100 living players.

This was a boy who came from precisely nothing and achieved everything.

He also scored what may be the greatest hat-trick ever scored. Watching his three goals against Valencia – a free-kick, a fine solo effort and a bicycle kick that flouts the laws of gravity – you get the sense this is more than just a footballer. This is an artist of the highest calibre.

Sure, Da Vinci was good with a paintbrush. But could he score a last-minute overhead kick to secure Champions League football? Not for me, Jeff.

Yet just a year later, Rivaldo had gone from hero to zero. His legacy tarnished forever thanks to one night in South Korea.

Turkey: From despair to delight

The night of June 3, 2002 was symbolic for Turkey, whose record on World Cup qualification made their efforts on human rights look fairly respectable in comparison.

It had been 48 years since they’d had the chance to contest the Jules Rimet trophy. The eighties – which included an 8-0 shellacking at home to Bobby Robson’s England – had been the nadir, though mercifully the following years saw marginal improvement.

The yardstick was another visit by the Three Lions, this time under Graham Taylor’s command, in 1991. Turkey were bold. England, much-changed from the Robson years, were bollocks. But Dennis Wise punched the ball in the net for a thoroughly undeserved 1-0 win. It was appalling luck for the Turks. As the old saying goes, sometimes life just kicks you in the falafels.

Progress continued, albeit slowly. Turkey were pointless and goalless after their forgettable trip to Euro 96, but during the latter part of the decade the gloom finally started to lift. A new generation of talented footballers kickstarted the national team’s long-overdue resurgence.

Yildiray Basturk was a vibrant creative force, Hasan Sas a dynamic forward with explosive finishing, and anchoring midfield was Tugay, a playmaker so elegant and effortless he could stroll through 90 minutes with slippers and a shisha pipe. 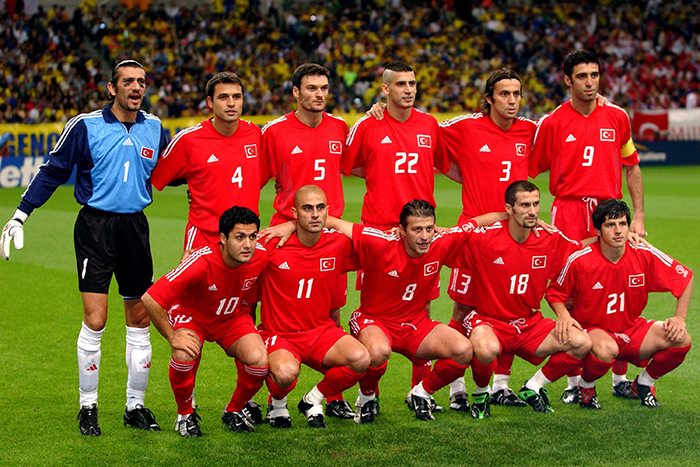 After successful qualification, the first opponents for their return to World Cup action were the mighty Brazil.

In some ways, it was the perfect fixture. A game that no one expected them to win, but gave their young guns a chance to test themselves against three of the greatest names in world football: Ronaldo, Rivaldo and Ronaldinho.

It promised to be one of the highlights of the early stages.

Sansu Stadium was awash with colour. Turkey had brought a noisy following to South Korea and they contributed heartily to the festival that traditionally greets Brazil in tournament football.

Buoyed by the atmosphere, Turkey were fearless from the off. Rather than park the bus, they stuck it in high gear and decided to take the game to the tournament favourites. It made for a fine spectacle.

Brazil enjoyed the better chances. Time and again it was the Turks’ enigmatic keeper Rustu Recber, whose face paint and ponytail made him look like the love child of John Rambo and Steven Seagal, who kept them at bay.

Turkey held firm and their gutsy first-half display was rewarded with a moment of glory in injury time when Hasan Sas lashed them in front.

The second-half response from Brazil was swift and deadly. Rivaldo crossed for the resurgent Ronaldo – keen to exorcise the demons of France 98 – to level the scores.

To their credit, Turkey gritted their teeth and held firm. Brazil’s creative force couldn’t break through the defences. With Ronaldo’s energy levels fading fast, the Selecao unveiled their secret weapon: the referee.

Official Kim Young-Joo had marshalled the game with the meek authority of a substitute teacher at Grange Hill. Somewhat overawed by the Brazilian superstars before his eyes, at times you wondered if he might hand them his notebook and ask them all to sign it. Every time a yellow shirt fell to the ground, the whistle blew.

Watching at home you feared that if Brazil didn’t find a winner through their own means, then Young-Joo might do it for them. Which is precisely what he did.

When Alpay brought down Luizao 20 yards from goal, a red card was the only conclusion. But the official wasn’t finished there. Undeterred by the rules of the game, Young-Joo pointed inexplicably to the spot. Rivaldo put the Brazilians ahead.

Winning the game while the Turks were losing their minds at the injustice, Brazil slowed the game down to a crawl. Rivaldo was disguising his timewasting with the sort of clumsy acumen that Jason Statham attempts to mask his English accent.

When a mightily fucked-off Hakan Unsal booted the ball in the Brazilian’s direction as he waited to take a corner, the stands roared their approval.

What happened next is the sort of World Cup shithousery that FIFA likes to brush under the carpet next to Jack Warner’s bank details. The ball pinged towards Rivaldo and the forward collapsed to the floor clutching his face. For a split-second, you wondered if the maestro was seriously injured.

Then the realisation hit hard. He was just fucking cheating.

Rivaldo’s theatrics were quickly exposed on the big screen. As red-carded Unsal marched back towards a furious Turkey dugout, the crowd was treated to a slow-motion replay of the incident in all its indignity.

The ball had hit his thigh, yet Rivaldo duly grabbed his face and started to writhe around unconvincingly like a cash-strapped student doing the afternoon shift at Babestation.

The stands erupted. The commentators voiced their disdain. Brazil won 2-1 against nine men. And somewhere in the world the great Socrates took a mournful drag on a cigarette. Beautiful game, my arse.

Football doesn’t mind a cheat. As long as he’s an apologetic one. That’s where Diego Maradona went wrong. Had he just owned up to being a bastard, history might have treated him differently. Shifting the blame on God was a step too far. The poor bloke wasn’t even on the pitch, after all.

Rivaldo didn’t apologise, nor did he go quite so far as blaming a popular deity. Instead he kept it simple. It was all Unsal’s fault.

“No, the ball did not hit my face,” he said. “But the Turkish player shouldn’t have done that in the first place. My experience counts.

“So the ball touched my leg and not my head, and I recognise that it did not hit my face, but the other player was still in the wrong. I said sorry to him, but these things happen in football.”

Who knows? Maybe there’s a scene on the cutting room floor at Lucasfilm where, after annihilating her home planet of Alderaan, Darth Vader gives Princess Leia a rueful pat on the shoulder. These things happen in intergalactic genocide.

By the time the final whistle blew the Turkish Football Federation demanded the instant dismissal of Young-Joo for “killing 70m Turks” with his inept performance.

Rivaldo, meanwhile, was named man-of-the-match by the sponsors, which softened the blow considerably of the pathetic £1,000 fine he later received from FIFA.

His career changed path after that tournament. Wherever he went, the shithousery in Sansu followed him across the globe. People used to describe him as “gifted”, now they preferred “controversial”.

He left Barcelona for Milan that summer and played for eight clubs in 12 seasons, including spells in Uzbekistan and Angola. His Wikipedia page reads like a Football Manager profile whereby the database decided his career path by tossing a coin. 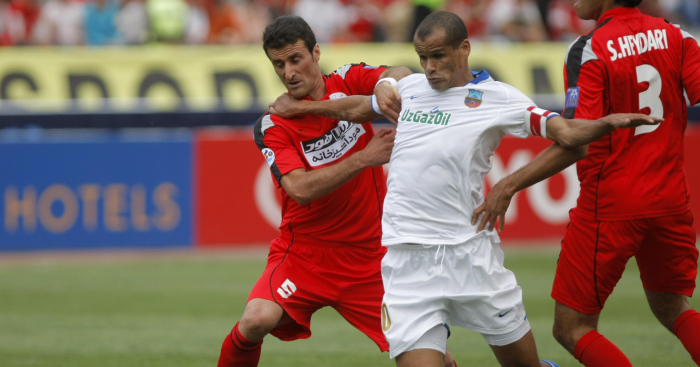 Of course, money was the heaviest contributor in his destiny. Though his powers had long since faded, there was always another chairman seduced by the thought of seeing The Artist Formerly Known As Rivaldo in his club crest, and willing to part with a big pile of cash for the privilege.

Not that he cares. Brazil won the game. He won the World Cup. Not bad for a boy from the favelas.

Cheating doesn’t win you friends. But, even for the best players on the entire planet, it does win you football matches.