The Shithouse Files: Ronald Koeman v England, when the ref bottled it 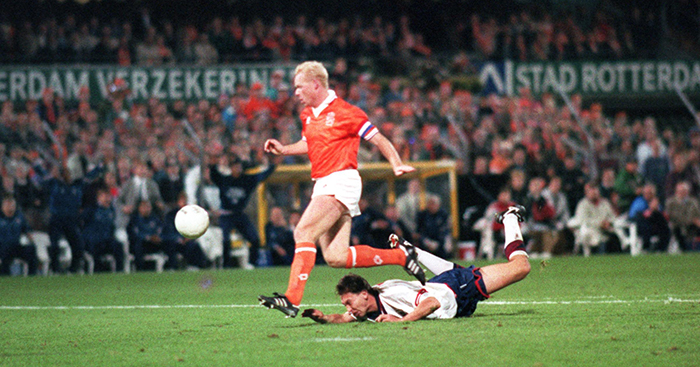 Ronald Koeman. You remember him. Stylish Dutch defender. Free-kick expert. Also, a bit of a shithouse, as @Sid_Lambert explains…

It had been a whirlwind three years for David Platt.

In June 1990 he’d become a national hero overnight, volleying England past Belgium into the World Cup quarter-finals. Throughout both normal and extra time England had been fairly woeful. Then Gazza dinked the ball into the box, Platt scored and Bobby Robson danced a jig of delight on the touchline. 119 minutes of depressing reality punctuated by last-gasp drama, which sounds like the traditional recipe for the EastEnders Christmas Special.

Fast forward to October 1993 and the Aston Villa man was in familiar territory: dragging his country out of a mess of their own making. Graham Taylor’s first – and only – World Cup qualifying campaign had flirted constantly with disaster, yet somehow they came to Rotterdam in need only of a draw to put themselves in a position to qualify for USA 94.

In the 57th minute, it seemed an unlikely victory was on the cards. Platt broke Holland’s offside trap and raced through on goal.

The only defender in touching distance was Ronald Koeman, but the England man had run across his body putting the ageing Dutchman in an impossible situation: foul him and concede a penalty and red card, or let him score an almost certain goal. Finally, fortune favoured Graham Taylor.

Until Lady Luck turned round and kicked him square in the plums.

It’s hard to find anyone with an unkind word to say about Graham Taylor. Put simply, he was a nice man who made dreadful decisions when he was in a position of power. Which puts him at least one notch above David Cameron.

We should have spotted the signs from the start. He’d set his stall out early. Inheriting the most technical England side in recent memory, Taylor soon banished the individual flair and brought in some good old-fashioned industry. Out went Chris Waddle and Peter Beardsley, in came Andy Sinton and Dennis Wise.

Taylor’s England selection policy saw more chopping and changing than a drive-thru circumcision clinic. He used a staggering 12 right-backs during his tenure, some of them completely untested in that position. Indeed, legend has it that if you stare into a mirror and say the words “David Batty at full-back” three times, a Gypsy curse will befall your entire family.

While many of his issues were self-inflicted, Taylor was also beset by some dreadful fortune – particularly the loss of Paul Gascoigne. Since assaulting Gary Charles’ kneecap during that frenetic opening to the 1991 FA Cup Final, he’d been sidelined for 18 months. And when he did return, he was noticeably heavier, less explosive and more fragile than the shining star who lit up Italia 90. 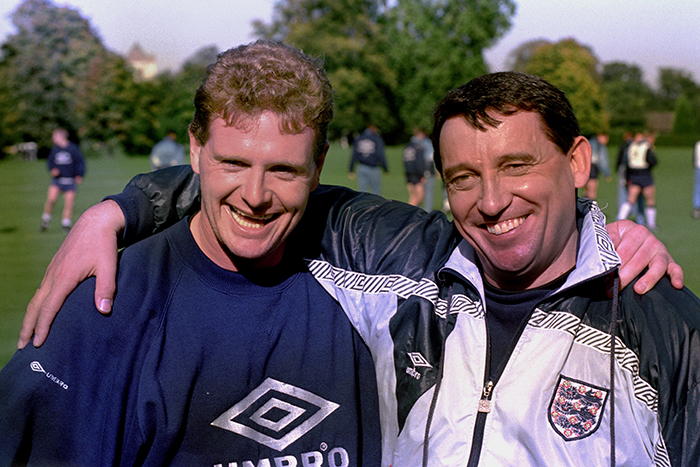 The nadir was the 1992 European Championships, a perfect microcosm of the Taylor era. The squad was a toxic mix of players past their prime, players woefully out of position and players who probably shouldn’t have been there in the first place.

The defining moment of the tournament was the substitution of Gary Lineker. The Spurs striker had been, admittedly, as abysmal as everybody else. Though when you’re relying on Neil Webb and Carlton Palmer for service at international level in 1992, then you’ve probably got a decent case for mitigating circumstances.

The defeat against Sweden saw the England boss labelled “Turnip Taylor” by red-top editors thirsty for blood. It was cruel and unnecessary. No one could doubt his passion or commitment. He was a decent man doing his best. But then again, even the most stubborn of root vegetables knew that subbing Lineker for Alan Smith was a fucking terrible idea.

Yet Taylor was nothing if not determined to make amends. At the start of the World Cup campaign, he made his boldest decision yet: granting behind-the-scenes access to a TV camera crew who would document England’s journey all the way through to USA 94.

At least that was the plan.

By 1993, Ronald Koeman could see the writing on the wall. This would be his last hurrah.

He’d been part of that glorious Dutch side that won the 1988 European Championships. But five years is a long time in football and his friends were making their way towards the exit door.

The legendary Marco van Basten had to call it a day after his ankles, a frequent target for Serie A’s hatchet men, finally gave up on him. Ruud Gullit didn’t look the same force without his dreadlocks (I remember thinking the same thing about Lenny Kravitz), and Frank Rijkaard was competing for midfield space with the fresh legs of Aron Winter and Ronald De Boer.

Unlike his ageing peers, Koeman was still integral to his club side. He was the defensive foundation of Johan Cruyff’s Barcelona.

In a lineup already stacked with attacking talent such as Romario, Hristo Stoichkov and Michael Laudrup, Koeman was regularly notching 15+ goals a season thanks to his dead-ball expertise. That squad was known as the “Dream Team”, a well-oiled total football machine on its way to four consecutive La Liga titles. 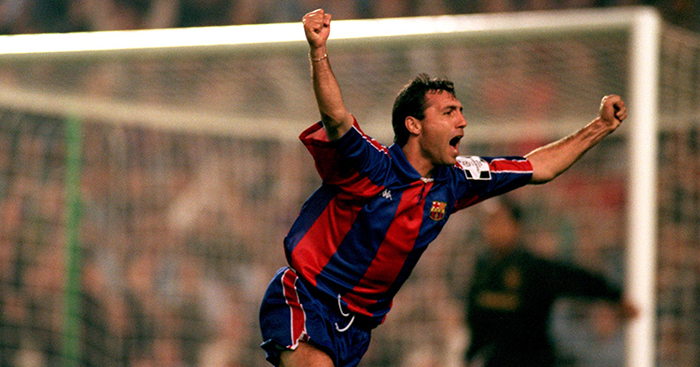 That sort of harmony was a far cry from the scene at international level. The Dutch dressing room was in one of its traditional transition phases: old stars refusing to go quietly, new ones making too much noise.

Like England, they’d suffered with inconsistency and the surprise emergence of Norway who topped the qualifying group. The Dutch salvaged a draw at Wembley thanks to some dark arts when Jan Wouters’ disgraceful (and unpunished) elbow on Paul Gascoigne stunted England’s two-goal start.

Even then they’d had to rely on the combination of Marc Overmars’ pace and Des Walker’s international career self-destructing on the spot to scrape a point.

Their build-up to Rotterdam had been slightly better, or less crap, than England, mainly thanks to the emerging talents of a young Dennis Bergkamp. But this wasn’t the Dutch of old. They were beatable.

Anticipating the influx of England fans, security at the stadium was tighter than the elastic on Jan Molby’s shorts. Initially the TV crew were refused access. Then Taylor, loyal to the last, smuggled them in by disguising them as members of the coaching staff and stashing the cameras among the kitbags.

If he’d shown the same subtlety with his tactics, then his team might have been in a better position.

Throughout the campaign, the documentary revealed a stark assessment of Taylor’s qualities as an international manager. There were the heart-warming moments: the unfailing positivity, the obvious pride in his job, and the courage to challenge an England fan for booing John Barnes.

It was a reminder that beneath the cruel headlines was a man who cared deeply about his players, even if sometimes they didn’t understand him.

One of the more memorable sequences saw substitute Nigel Clough attempting to decipher Taylor’s instructions before entering the field of play during the 2-0 defeat to Norway. The Liverpool forward had absolutely no idea whether he was meant to be up top, or in the hole. My dad had similar issues with the aerial for our first big telly.

Taylor’s tactical failings had convinced a downbeat media that England were already doomed. But against Holland they started surprisingly brightly. A Tony Dorigo free-kick struck the post, Tony Adams forced a smart save from Ed de Goey. Against all expectation, England were more than a match for their hosts.

Twelve minutes into the second half, they had the chance that their ambition deserved. As Platt charged through on goal, Koeman made his choice. A tug on the shirt. A foul. A linesman’s flag. And shortly, a penalty and a red card.

To the disbelief of the whole stadium, referee Assenmacher opted against both. You could argue that the initial contact was outside the box, but in the realms of catastrophic human decision-making, not giving Koeman a red card is up there with Katie Price’s music career. Entirely un-fucking-justifiable.

On the touchline, the England bench raged. Taylor lamented to the linesman, “Your mate’s just cost me my job.” He was partly right. Though it wasn’t the fella with the whistle who played Gary Pallister at wing-back in Oslo.

With staff and players still seething, England reverted to the incoherent mess of old. The Dutch won a free-kick in dangerous territory. Up stepped Koeman, only for Dorigo to make a heroic block and save the day. Assenmacher, concerned that he hadn’t done quite enough to gift the Oranje victory, ordered it to be re-taken for encroachment.

There were 48 million people living in England at the time. And all but one could see what Koeman was going to do with his second attempt on goal. Sadly, that fucker was playing in goal for the national team.

As ITV commentator Brian Moore screamed, “He’s going to clip one!” David Seaman stayed rooted to the spot. The ball went in the net and England were all but eliminated. A late strike from Dennis Bergkamp sealed their fate.

Though Taylor bore the scars of his England reign and the media vilification for many years, he responded with the dignity characteristic of the man. He was sporting enough to feature in a Yellow Pages advert where he ordered a cake for his successor Terry Venables.

And eventually, after a spell at Wolves, he returned to his spiritual home of Vicarage Road. A decade with a nightmare start had a fairytale finish as he led his beloved Hornets back to the Premier League.

As for Koeman, he made it to USA 94, where the Dutch were dumped out by eventual winners Brazil in the quarter-finals. He finished his career back in Holland with Feyenoord, and even made an appearance on Fantasy Football League’s “Phoenix from the Flames”, in which he recreated that professional foul against a backdrop of gags about Willie Thorne, The Milkybar Kid and Victor Meldrew.

It’s a good sketch, but not enough to erase the pain of Rotterdam. For those who remember England in the Nineties, Koeman’s name provokes about as much mirth as Poll Tax.

As the old saying goes, cheating doesn’t make you a permanent shithouse. But it does make you a memorable one.