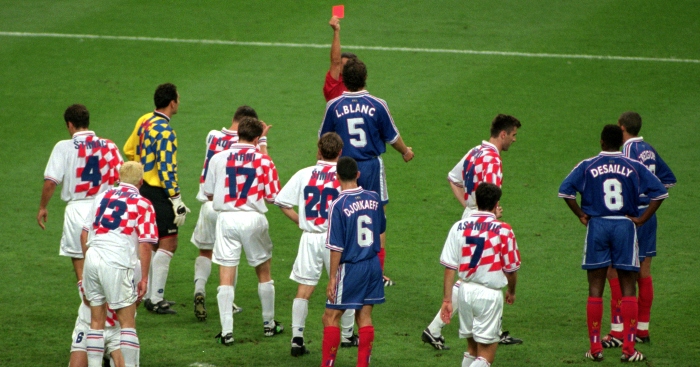 Slaven Bilic. You remember him. Rocker. Smoker. Manager. Decent bloke all round. Also, a bit of a shithouse, as Sid Lambert explains…

English football fans got their first glimpse of Slaven Bilic on a windswept Monday night at White Hart Lane in February 1996.

He’d joined West Ham for £1.3million from Karlsruhe, and on any other occasion the arrival of a rough, tough Croatian international in East London would have been headline news. Unfortunately, his transfer coincided with that of Dani de la Cruz Carvalho, a.k.a Dani, a.k.a The Sexiest Footballer That Ever Lived.

The Portuguese attacker, signed on loan from Sporting, was a dreamboat. Hair like Johnny Depp, puppy dog eyes and a smile that could melt the heart of both Man and Beast.

When pressed upon his new signing’s beauty, Hammers’ boss Harry Redknapp remarked that defenders “didn’t know whether to mark him or fuck him”. That was about as tactically astute as things got in the nineties.

Dani commanded the attention of the Sky cameras in residence for a full-blooded London derby with Spurs. The dreamboat scored the winner to crown a fairytale debut, though it was Bilic whose display most impressed those in the know. 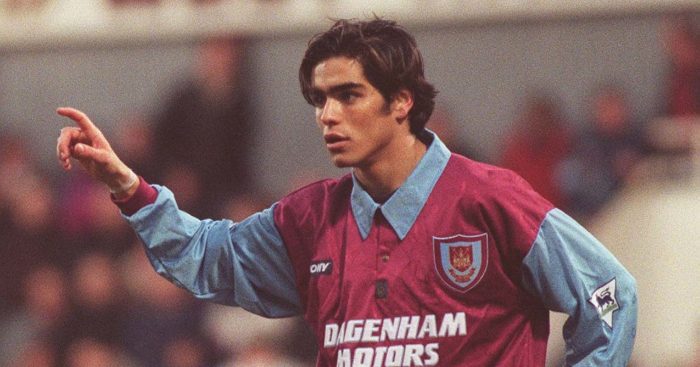 The Croatian plugged a porous West Ham defence. He was solid in the tackle, committed in the air and confident with the ball at his feet. As they moved away from the relegation zone, he soon became a cult hero.

Here was a guitar-playing heavy metal fan who enjoyed a cheeky cigarette after a game. Julian Dicks had found his soulmate.

Dani didn’t last long at West Ham, though, and Bilic’s own romance with the club was brief and passionate. He was integral to their escape from relegation again in 1997, but his ambitions quickly outgrew his new surroundings.

He moved to Everton for £4.5million that summer. A bigger club for bigger money.

Bilic was a qualified lawyer fluent in four languages. Beneath the charming exterior lay an analytical mind with ambitions for both club and country – as France would soon find out.

Jacquet gets the blues

The spring of 1998 should have been Aime Jacquet’s finest hour. The World Cup was coming to French soil and he’d spent two years honing his troops for an attack on football’s biggest prize.

But the France boss was fighting a war on two fronts. Not only did he have to contend with the likes of Brazil and Italy, he had to fend off his own national press.

The French media had grown weary of his cautious mentalite. They wanted expression, artistry and joie de vivre. They wanted Tigana or Platini.

Jacquet’s rigid defensive tactics were delivering results but little entertainment. Before a ball had been kicked, they’d raised the white flag.

A calm, colossal presence, Blanc had earned the nickname ‘Le President’ and had the distinction of never receiving a red card throughout his career. If France were to achieve their dream, much would rest on his broad shoulders.

They cruised through the group stage without breaking sweat. In fairness, their group draw – South Africa, Saudi Arabia and Denmark – couldn’t have been much sweeter if they’d chose it themselves, which given FIFA’s record, you wouldn’t rule out as a possibility.

It was in the second round vs Paraguay when they started to splutter. An uninspiring 90 minutes was followed by more torture in extra-time. Then Blanc took centre stage, stroking home in the 114th minute to send his country into the quarter-finals against Italy.

By now France had all but stopped scoring, an unfortunate consequence of picking Stephane Guivarc’h up front.

Blanc was magnificent yet again. Vieri and Baggio would have enjoyed more space in a phone box. When the match went to penalties, it was his ice-cool kick that booked a date with Croatia for the semi-final.

Croatia gave the world notice of their potential at Euro 96, their first tournament since the break-up of Yugoslavia, when they’d pushed eventual winners Germany to the brink in the quarters.

Two years later here they were in the World Cup semi-finals. A plucky underdog against the betting favourites. Croatia were in their element.

These were players at the absolute peak of their powers. Davor Suker’s left foot provided the sort of filth you normally found on the top shelf of a newsagent, while Robert Prosinecki could control an entire game of football without ever threatening to break into a jog. Bilic was the defensive mainstay.

But unlike ‘96, he couldn’t enjoy the competition with the same sort of reckless abandon.

His first season at Everton had been a grave disappointment. Flashes of his West Ham form were marred by repetitive injuries. And they weren’t the sort of injuries you could attribute to bad luck. This was his body breaking down at the worst possible time.

He knew the clock was ticking. This would be his only shot at a World Cup Final. Desperate men take desperate measures.

Trailing 2-1 to goals from Lilian Thuram (Guivarc’h was having another one of those games where he wasn’t on speaking terms with the ball), he tangled with Blanc at a corner in the 76th minute.

There was some pathetic grappling then a half-hearted push in the chest from Blanc caused Bilic to recoil momentarily.

Watching the footage again, you can see the split-second where this fiercely intelligent man realised a universal truth that traversed all four of his spoken dialects: “I could get this c*nt sent off here.”

He collapsed to the floor holding his forehead like a kid feigning a temperature to escape a trip to the dentist. The referee fell for it. Blanc saw red for the first time as a professional.

In the studio, BBC pundits were incredulous. Alan Hansen said Bilic’s acting was the worst he’d ever seen, which was quite something for a channel that screened Birds of a Feather. Alex Ferguson, a long-term admirer of Blanc’s talents, said the Croatian went down “as if he’d been killed”.

Bilic has long since refused to accept guilt for the incident, insisting: “He hit me. It wasn’t like Mike Tyson. But I was struck.”

It wasn’t like Mike Tyson. As sporting understatements go, that’s up there with Geoff Hurst’s hat-trick was an important part of England winning the World Cup in 1966 and Duncan Ferguson enjoyed the physical side of the game.

The damage was done. FIFA dismissed any suggestion of an appeal and Le President was cruelly suspended for an iconic day in French history.

Blanc’s staunch refusal to blame Bilic only added to his legend. He would make up for the heartache of missing the ‘98 showpiece by winning Euro 2000 at the ripe old age of 34.

Then in 2001 he would make a belated appearance in the Premier League when an extraordinary set of circumstances saw him inherit Jaap Stam’s No.6 shirt at Old Trafford.

The formidable Dutchman had been the cornerstone of United’s defence for three seasons, but a tabloid serialisation of his autobiography had angered Alex Ferguson.

It wasn’t the fact that he labelled Gary and Phil Nevile “a pair of busy c*nts”. That was deemed entirely acceptable by most that knew them. It was the revelation of an illegal approach by United before his transfer from PSV that caused controversy.

Stam was swiftly sold to Lazio. Blanc was brought in on a free transfer. In doing so, Ferguson ignored the age-old maxim: never sell one of the best defenders in the world and replace him with a much older, shitter one.

It seemed a curious move. But who were we to criticise the man who’d defied convention time and again? He delivered a treble with David May in his squad. That’s a feat of magic even Paul Daniels would have puffed his cheeks at.

Alas, Blanc’s early days at United were calamitous. Thrust into the hurly-burly of Premier League football, he looked a shadow of his former self. The champions were vulnerable like they’d never been before.

Five early-season defeats to Bolton, Liverpool, Arsenal, Newcastle, Chelsea spelled out the name B-L-A-N-C. Talk about rubbing it in. 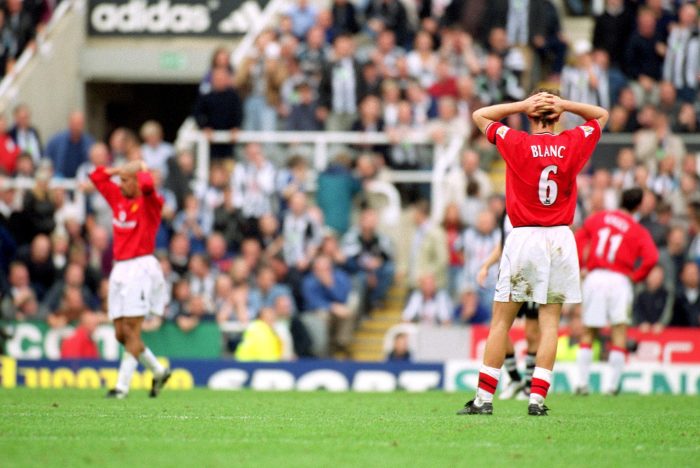 Things did improve slightly. United – and Blanc – found their footing to finish third in the league. But when you’re making Big Michael Ricketts look like Ronaldinho, it’s probably time to hang them up, which he did the following season.

He wasn’t by any means the worst Frenchman to play for United – still seen as a foot race between William Prunier and David Bellion – but his stint at Old Trafford wasn’t quite the final chapter his storied career deserved.

As for Bilic, his forehead miraculously recovered, though the rest of his body didn’t fare so well. After the tournament he played only 13 more games as a professional footballer. Injuries did indeed curtail a career that could have been so much more.

He transitioned easily into management. His likeable manner endeared him to press and players alike.

Such was his nationalistic pride at being appointed Croatia manager in 2006 that he accepted a rather meagre £40,000 per year salary, comfortably one of the worst among his international counterparts. Not that money was an issue. His massive payout from Everton saw to that.

His stint as national boss was eventful and exciting in equal measure. He blooded young players and gave them a freedom this profession rarely affords.

One of the most memorable moments came at Wembley in the pissing rain in 2007 against England in a do-or-die European Championship qualifier. Bilic’s side were quick and creative. England were slow and shite.

Steve McClaren, appointed on the basis of Middlesbrough’s rollercoaster 2006 UEFA Cup run, looked clueless. Things were a lot tougher when you couldn’t just throw on Yakubu and Massimo Maccarone and sling it into the mixer.

Despite his part in England’s downfall that night, Bilic remains a welcome figure on these shores. In France, he’s about as popular as cheap wine and ready meals. He’ll not be forgiven for robbing one of their football heroes of his date with destiny.