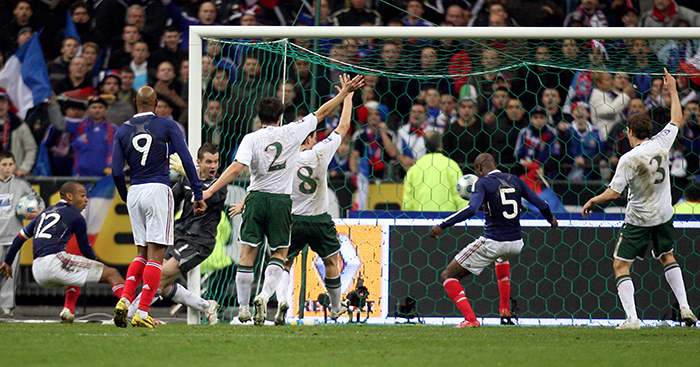 Thierry Henry. You remember him. Great goalscorer. Va va voom and all that. Also, a bit of shithouse. As @Sid_Lambert explains…

There’s an incredible clip on YouTube of Thierry Henry at an NBA game in November 2017 where he has the ball mid-court, bounces it once, then gently lobs it right-footed into the hoop.

The celebration is rather muted compared to his early years. There are no knee slides or outstretched arms. Instead he looks to the floor, smiles, and points a sole finger skyward while those in attendance applaud his genius.

It’s the humblest of self-aggrandising celebrations. The one which says unmistakably to those in attendance: “I can’t help it, I’m just the absolute fucking bollocks.”

Rewind eight years to a November night in Paris and the Frenchman’s celebrations were more sombre.

On this occasion, he’d set up the winner as France beat Ireland in a nerve-jangling play-off for a place at South Africa 2010. The jubilant Parisians were on their feet. The Irish were on their backsides. Yet so was Henry, consoling Richard Dunne, the heartbroken centre-half who’d personified Ireland’s herculean efforts.

Ordinarily commentators would wax lyrical about the class of a man to comfort the losers. But there was no such acclaim here. As far as Ireland were concerned, Henry could stick his va va voom up his arse. He’d just cheated them out of the World Cup. 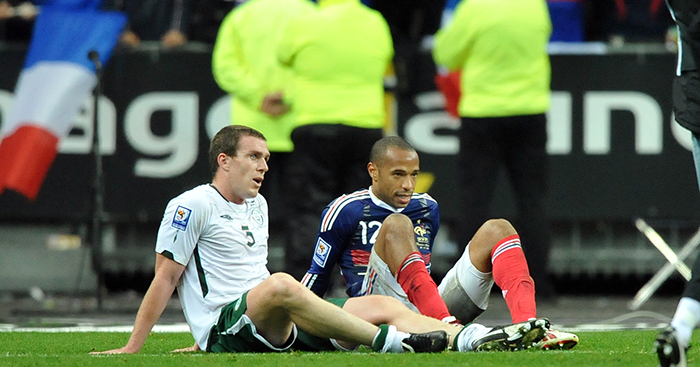 It had been a rough few years for Irish football. Steve Staunton had been sacked after a campaign that included getting absolutely caned in Cyprus, which is perfectly acceptable if you’re a schoolkid celebrating his A-level results, less so if you’re an international football team. That 5-2 battering defined his disastrous reign.

There was no denying that the job was beyond Staunton, though he was hardly blessed with an array of raw materials. Talent-wise, these were lean times.

If Ireland were going to win football matches, they were going to have to win them bastard ugly, which was music to the ears of their new boss Giovanni Trapattoni. The wily old master of Italian football had built a career playing dour football even with the best players with the world at his disposal.

It seemed the FAI boss John Delaney and co. had made a wise choice at last. If Trapattoni could convince disbelieving mavericks like Baggio and Vialli to shithouse 1-0 wins, then imagine what he could do with a workhorse like Glenn Whelan.

Under Trap’s guidance, Ireland were tighter than Daniel Levy’s purse strings on Deadline Day. A record of four wins, six draws and no defeats in qualification earned them a spot in the play-offs against 2006 World Cup finalists France. The boys in green were cautiously optimistic.

While Trapattoni had united their squad into a well-drilled machine, France were on the brink of revolution.

Raymond Domenech had never felt welcome as French coach. There were plenty in the media – and even the French Federation – who would have preferred the suave Laurent Blanc. Instead, it was the eccentric, astrology-loving Domenech who took the top job.

When he dropped Robert Pires from the national squad, the Arsenal winger’s pals claimed it was because he was a Scorpio, and the media revelled in it. The likelihood is that Pires was 33, on the bench at Arsenal and Arsene Wenger had just binned him off to Villarreal on a free. But the battle lines between Domenech and the press had been drawn.

Prone to the sort of gaffes that make Boris Johnson look like a PR guru, Domenech was ridiculed even when he had occasional moments of success.

Convincing Zinedine Zidane to reverse his retirement from international football had been a masterstroke. The duo came within one headbutt of winning football’s richest prize. But it was Zidane – alongside fellow returning veterans Claude Makelele and Lilian Thuram – who got the praise for restoring French pride. All Domenech did was pick up the phone. 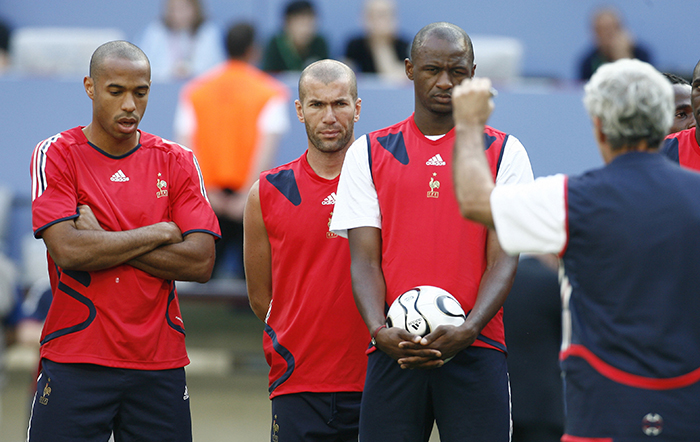 Life after Zizou was painful. France were a mess. Old players past their prime, young players believing their own hype. It was a toxic mix for any manager, let alone one with Domenech’s propensity to shoot himself in the foot. An awful showing at Euro 2008 wasn’t helped by his bizarre decision to propose to his girlfriend live on telly in the post-match interview.

Somehow he kept his employment, though the World Cup qualifying campaign was predictably shambolic. Again, Domenech was unable to sever ties with the old guard and integrate the new.

Thierry Henry was a classic example. Domenech had named him “skipper for life”, but his career at the top-level was dead in the water. His pace had dwindled, his body had begun to crumble. In 2009-10 he would start only 15 league games at Barcelona, where a young lad called Messi had pushed him to the sidelines.

Les Bleus coughed and spluttered into the play-offs. A 1-0 win at Croke Park put them in the driving seat. But with this team, there was no telling when the wheels might fall off.

The Irish were magnificent in the second leg. Snarling into every tackle, hassling the hosts at every opportunity. They took a deserved lead through Robbie Keane and the tie went to extra-time.

With penalties approaching, France – and Domenech – needed a hero. It was the moment for the skipper to show there was still life in his career yet. All he needed was a chance. A chance to prove everybody wrong. It came in the 101st minute.

The French lofted a free-kick into the box. Henry, showing the sort of instinctive hand control he would later reserve for Jamie Carragher’s thigh, kept the ball in play and caressed it nicely into his path, allowing him to cross for William Gallas to notch the winner. There was no replay in the stadium, so the supporters celebrated with unabashed glee.

Those emotions turned to shame the next morning. The headlines made hard reading. The country was embarrassed. The media – incensed that the national team had betrayed core French values – dubbed them “les imposteurs”.

An embarrassed Henry suggested the two sides should stage a replay, safe in the knowledge that there was more chance of Sepp Blatter publishing his tax returns. Not that FIFA were silent on the matter. Oh no. The moral arbiter of the game had a reputation to uphold after all. Blatter himself announced that the incident would be reviewed at the next disciplinary committee.

In the meantime, France were on their way to South Africa.

Paris changed everything for Thierry Henry. His value as a player, and a brand, nosedived overnight. He looked forward to the World Cup with the sort of faux enthusiasm a teenager musters for visiting their grandparents.

By now Domenech had lost any semblance of professionalism or control. His pre-tournament prophecy that his side had a “date with destiny” proved ominous.

The preparation was chaotic. William Gallas crashed a dune buggy, Nicolas Anelka fell off a mountain bike, the team were absolutely shite in their warm-up fixtures. Fuck knows what the horoscopes were saying. Maybe he would have been better off letting Russell Grant pick the team.

The low point arrived at half-time in the game with Mexico. Anelka, never a man to knowingly improve morale, reacted angrily to news of his substitution. The headline in the following day’s L’Equipe ran the striker’s exact words verbatim. “Go get fucked up the arse, you dirty son of a whore!” And Graham Taylor thought “Turnips” was bad.

Anelka refused to apologise. Not that it would have mattered. Managers can be a forgiving lot, but when your main striker’s suggesting you should be violently sodomised, there’s probably no way back.

Unsurprisingly, Anelka was sent home. And equally unsurprisingly, his team-mates took one last chance to seal their own personal fate. Their next training session was abandoned as they went on strike in protest at their manager.

Their players opposed coach Raymond Domenech’s decision to send Nicolas Anelka home, despite the striker verbally abusing him and refusing to apologise.#bbcworldcup pic.twitter.com/N6mokacVR6

Having been emasculated by his own players in front of the world, Domenech took one last chance to kick himself in the plums. In a final act of self-ridicule, he read out a written statement from the players about his own inadequacies while they sat stony-faced behind him on the bus.

By now Henry was skipper in name only. There was no leadership. No speeches. No attempts to heal a divided squad. Instead, the man whose cheating had got them to the World Cup sat quietly at the back of the bus as they drove themselves into national disgrace. Maybe he was an imposteur after all.

France returned to home soil to face a government inquiry. Domenech finally lost his job and President Nicolas Sarkozy even cancelled a meeting with Vladimir Putin to interrogate Henry in person.

There was some good news. FIFA’s own investigation found no reason to discipline the Frenchman. To deter the Football Association of Ireland from legal action, they offered the FAI a €5million “loan”. You know, one of those extra-special FIFA loans that don’t need to be repaid. Delaney trousered the money. All was forgiven.

Henry, by now newly-divorced to add to his personal woes, left La Liga and packed his bags for Major League Soccer. The New York franchise, sponsored by Red Bull, were prepared to pay him far more money to play in a far worse league. If that doesn’t give you wings, then nothing will.

Years later he reflected on that period as the worst of his career. “They say you get what you deserve,” he said. A momentary mistake, an act of self-preservation, a desperate attempt to restore his former glories, had changed his legacy forever.

Cheating doesn’t win you friends. But, even for the best players on the entire planet, it does win you football matches.