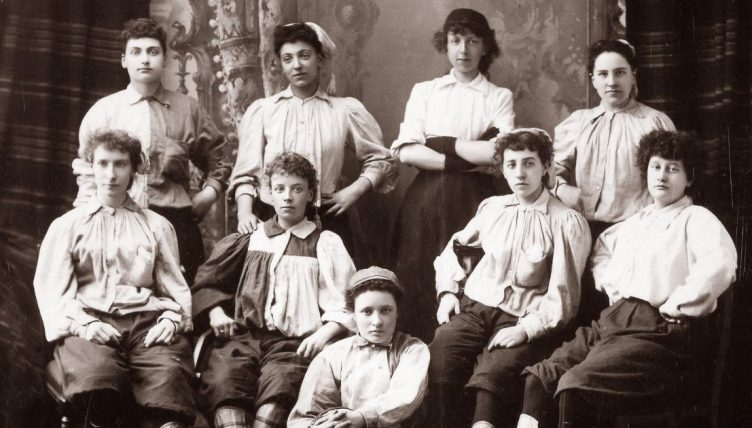 Fifty-one minutes into an England versus Scotland, the players are hustled off the pitch by a violent mob, causing the match to be abandoned.

It’s 1881, and the players are all women, who flee the fracas in horse-drawn coaches, naturally.

The match at the Shawfield Ground in Glasgow was attended by over 5,000 spectators and is thought to be one of the very first international women’s games, though sadly curtailed before a result could be reached.

That the match’s organiser, the legendary Mrs Graham, who played in goal for Scotland, had the foresight to use a pseudonym tells you of the reception she expected for her endeavours. In the 19th century, women playing football was a subversive act.

On the eve of the suffragette movement, women were beginning to renegotiate their standing and the actions of the Shawfield mob were a response to a question echoed across Victorian society – what is a woman’s purpose now?

Mrs Graham’s kickabout was considered transgression on a number of frontiers – how women ought to appear, what they should wear, what their bodies are for – and the press in the following days did not forget to wheel out the time-old suggestion that football is a ‘men’s game’ and much too rough for the gentle temperament of the female.

Even the British Medical Journal waded in on the debate, claiming that ‘we can in no way sanction the reckless exposure to violence, of organs which the common experience of women had led them in every way to protect.’

Not to be disheartened or intimidated by the rioters’ objections, Mrs Graham joined forces with one Nettie Honeyball – also a pseudonym – in the foundation of the British Ladies Football Club.

Speaking with a reporter for The Star in 1895, Honeyball said: “Why shouldn’t it be popular? We have speed and skill, and they shall not lie dormant. This is no girlish folly. The British Ladies Football Club is a stern reality.”

And she meant it. By a series of newspaper advertisements, Honeyball had attracted 26 players aged between 15 and 28, including three married women, whose habit it was to train from 1pm ‘til dusk. She drafted in help from Spurs winger Bill Julian and arranged blackboard lessons taught by players from nearby Millwall FC.

In March 1895, the BLFC had the chance to flaunt their prowess. More than 10,000 spectators showed up to Crouch End to see a North London side beat South London by seven goals to one.

#OnThisDay in 1895, the British Ladies – founded one year previous by Nettie Honeyball – staged their first ever game.

10,000 spectators flocked to Crouch End to see North London defeat their southern counterparts 7-1, but women's football was the real winner that day. pic.twitter.com/uOsp6wKVPY

The North wore red, the South donned blue, but all wore bonnets, stopping play to adjust their hairpins after heading the ball. None wore corsets and high heels – it was proper men’s boots, all leather and laces.

The project’s financial backer was Lady Florence Dixie, a wealthy aristocrat who, according to Honeyball, “stipulated before becoming president, she didn’t want to see the sport ridiculed with long skirts and balloon shoulders.”

Dixie, like Honeyball, Mrs Graham, and so many early women footballers, was a staunch feminist. She was hardcore, too. A renowned war correspondent, she interviewed Zulu kings during the Boer War and brought a pet jaguar back from her travels to Patagonia, as well as publishing a range of feminist treatises and Gloriana, a feminist utopian novel.

Relishing men getting their knickers in a twist over the players’ attire, Dixie saw women’s football as a weapon of subversion, and she supported the team not as a scarf-waving soccer fan but as a unique means of advocating for dress reform and other feminist ideals.

It made quite a splash. Dixie happened to be at the centre of one of the most talked-about Victorian scandals, as her nephew Lord Alfred Douglas – AKA ‘Bosie’ – was known to be in a homosexual relationship with Oscar Wilde.

As libel proceedings rumbled on, the British Ladies Football Club gained high profile coverage through Dixie’s association. Imagine Meghan Markle suddenly takes an interest in curling, how the tabloids would go in on those cute little brooms.

"The first match of the British Ladies' Football Club"

Here's one of the earliest illustrations of women playing football – from 'The Graphic' periodical (March 1895). #WomensWorldCup #FridayFeeling pic.twitter.com/b9IYwRgzp9

“The first few minutes were sufficient to show that football by women, if the British Ladies be taken as a criterion, is totally out of the question,” remarked the Daily Sketch on the Crouch End fixture. “A footballer requires speed, judgement, skill, and pluck. Not one of these four qualities was apparent on Saturday. For the most part, the ladies wandered aimlessly over the field at an ungraceful jog-trot.”

It’s not a far cry from the derision lurking in Twitter’s darker corners these days, but just like today, the players didn’t let a little vitriolic ribbing stop them from pursuing their sport.

With Lady Dixie’s purse behind them, the British Ladies Football Club toured the UK, taking in the likes of Ashton Gate and St James’ Park as they participated in more than 100 matches over the course of two years.

“When the novelty has worn off I do not think women’s football will attract the crowds,” wrote the Manchester Guardian after the Crouch End match.

In 2019, more than one billion viewers tuned in to watch the Women’s World Cup. The ‘stern reality’ of women’s football has long outlasted Honeyball’s daring legacy.

Alessia Russo is our hero: she missed a sitter just to score a backheel ‘meg