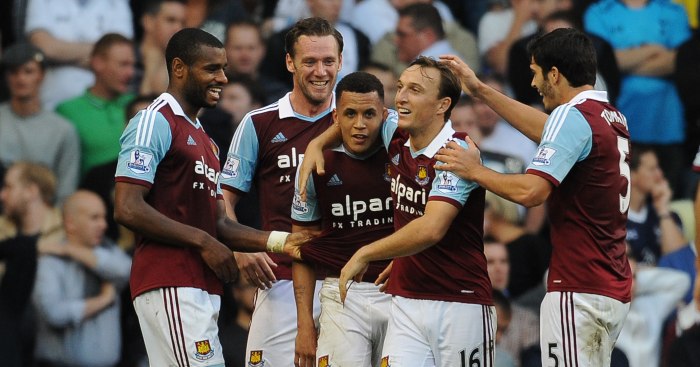 Sam Allardyce is probably the last individual who needs any opportunity for self-promotion.

A man with the self-awareness of a cabinet minister, Allardyce has long since passed into caricature. After all, this is a man who once claimed it was only his surname that prevented his appointment as Real Madrid manager.

However, existing stereotypes can mask the fact that Big Sam has achieved some impressive feats in management. He’ll be the first to tell you he’s never been relegated from the Premier League. At Bolton, powered by his pioneering of sports science and a left-field approach to recruitment, he guided the Lancashire club to their most glorious period since the days of Anthony Eden.

His legacy at West Ham is more complicated. On one hand, he rescued the club from Championship purgatory, re-established them in the Premier League and left behind a solid squad for Slaven Bilic.

Alternatively, his popularity with the supporters was best summarised when fans booed a turgid home victory over Hull City and Allardyce cupped his ears to them. Perhaps the most northern manager coaching the most southern club was destined to never be the most harmonious match.

But Allardyce did gift West Ham fans one precious memory. In October 2013, the Hammers travelled to Tottenham having not beaten their London rivals at White Hart Lane in the 21st century.

Using a 4-6-0 formation, last seen by Spain’s all conquering national team, West Ham stormed to a 3-0 victory capped by an outstanding solo goal by Ravel Morrison.

Afterwards, Big Sam entered the post-match interview looking like a cat that’s been awarded with a lifetime’s supply of cream. For once, his emotions were perfectly in line with West Ham’s fanbase. Rare bragging rights would be savoured and celebratory DVDs released.

How West Ham came to line-up with no strikers can be partly answered with one of the more predictable phrases in the English language: an injury to Andy Carroll.

After an impressive loan spell, Allardyce spent the majority of West Ham’s summer transfer budget on securing Carroll’s services. The spare change was used to sign Stewart Downing to supply the crosses for the big Geordie, completing what seemed like a fool-proof strategy on paper.

The snag? Carroll’s limbs were made of pasta. Injury meant the striker didn’t make an appearance until January, meaning Allardyce needed to improvise. Carlton Cole and Mladen Petric were signed on short-term deals to compliment the talents of Modibo Maiga. Stunningly, this made little impact.

West Ham’s started the 2013-14 season at a snail’s pace. Goalless draws at Newcastle and Southampton were complimented by dour defeats against Stoke and Hull. After six games, the Hammers had one win and four goals, showing an admirable commitment to providing no entertainment whatsoever.

In fact, come December, West Ham had been involved in more 0-0 draws than there had been across the entirety of the Bundesliga.

Therefore, change was not just desired but necessary. For the game at Tottenham, Allardyce relegated all his available strikers to the bench and enlisted midfielders Morrison and Mohamed Diame to rotate as the furthest man forward. This was radical stuff in English football in 2013, especially from Allardyce, whose previous appreciation of Spanish culture extended to sangria and Lineker’s Bar.

The formation change completely flummoxed Spurs. Their manager Andre Villas-Boas, a man as earnest as Garth Crooks approaching a pun, had overseen his own underwhelming start to the season and was struggling to incorporate the seven players bought with Gareth Bale’s transfer fee.

West Ham had the better of the first half, with Morrison proving central to their play. One slaloming run, curtailed illegally on the edge of the area, led to the half’s best opportunity. Mark Noble, showing the invention we’d expect from the Canning Town Pirlo, enterprisingly scooped the ball over the wall and Kevin Nolan volleyed just wide from an angle.

Tottenham’s main outlet was Jermain Defoe, serenaded with four-letter obscenities by the travelling support throughout. Supplied by Andros Townsend, during the four weeks when the winger was England’s Next Bright Hope, Defoe was denied on three occasions by Jussi Jaaskelainen. As the game wore on, Spurs looked the more likely to score.

The opening goal came against the run of play; a well-executed masterplan this may have been, but the best generals are always the luckiest.

From a corner, Winston Reid directed a header goalwards only to see it hit Nolan, who was standing in front of the goal line. Fortuitously, the ball rebounded to the New Zealand international and Reid slammed home at the second attempt. It was West Ham’s first away strike of the season. 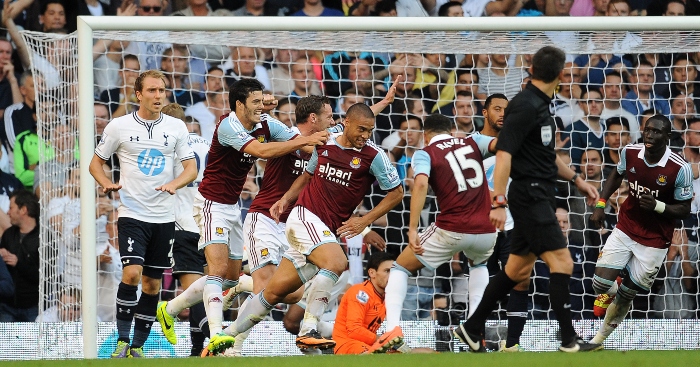 The visiting fans were sent into pandemonium and a blue flare was thrown onto the pitch. Usually this would be a sign of premature celebration that would be quickly punished by the gods. Instead, the next 10 minutes confirmed the day’s red-letter status for all associated with West Ham.

Latching onto Noble’s through ball, Ricardo Vaz Te shot against the advancing Hugo Lloris and saw the ball fly back at him, hit a knee and ricochet into the far corner.

Like a rookie golfer who’s just hit a hole-in-one, Vaz Te tried his best to look nonchalant in his celebration but failed to contain his surprise. There was no way back for Tottenham after that.

By now, the West Ham fans were positively crowing at their rival’s misfortune and own team’s surprise success. The afternoon hardly needed any further gloss, but Morrison would soon provide it.

The game’s outstanding performer, the midfielder picked up possession in his own half and accelerated past Jan Vertonghen. Sprinting towards goal, Morrison proceeded to manoeuvre around Michael Dawson as if the defender was a garden gnome trying to stop a runaway elephant.

With Lloris closing in and options rapidly running out, Morrison delightfully dinked the ball over the Spurs goalkeeper to complete the rout. The whole moment had strong Michael Owen against Argentina vibes and was undeniably the highlight of Morrison’s career to date.

The game meandered to its conclusion thereafter. On the touchline, a beaming Allardyce expressed his disappointment to the fourth official when only four minutes of injury time were added. In the stands, West Ham’s followers convulsed with joyful disbelief. This was a day to make up for the perennial mediocrity of their club.

In the post-match interview, Allardyce explained how he had studied Tottenham’s play and decided that their centre-backs would struggle without any striker to mark and midfielders breaking from deep positions.

After labelling his own side “relegation favourites” before the match, the whole experience seemed to be a gleeful double bluff to the more studious Villas-Boas – the equivalent of the school PE teacher beating the new maths professor in the pub quiz.

West Ham persisted with the formation for a further six matches, with diminishing returns. The whole season ultimately proved forgettable and Allardyce lost the good-will generated from this result after following a 5-0 FA Cup defeat at Nottingham Forest with a 6-0 spanking at Manchester City.

However, for one day, the man from Dudley proved he truly was Sam Allardici and gave West Ham fans a result to cherish for years.