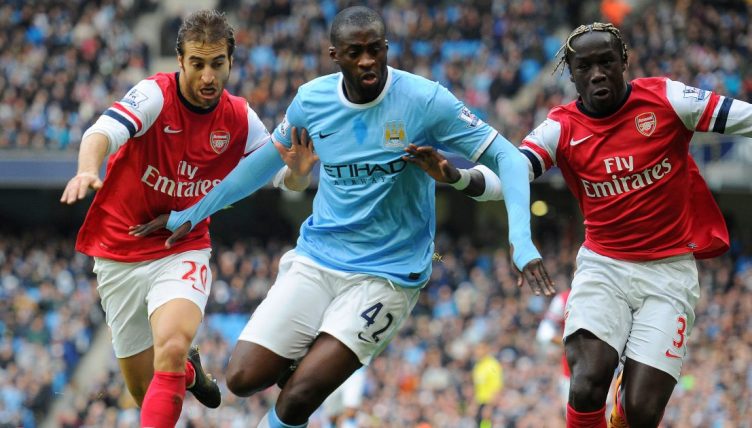 The tales of players Arsene Wenger nearly signed for Arsenal had become well known by the manager’s latter years at the club.

Zlatan Ibrahimovic famously turned down a trial because “Zlatan doesn’t do auditions”. Cesc Fabregas almost brought his mates Lionel Messi and Gerard Pique with him from Barcelona. Cristiano Ronaldo was presented with an Arsenal No.9 shirt before Carlos Quieroz pointed the Sporting teenager in the direction of Manchester United.

The list goes on: Vincent Kompany, Raphael Varane, Paul Pogba and many, many more.

Yaya Toure is among that list, but it wasn’t entirely Arsenal’s fault they were unable to sign one of the catalysts behind Manchester City’s transformation into English football’s Death Star – and it’s unlikely any Gooners who witnessed his one and only appearance in an Arsenal shirt would have cared at the time.

Toure had only just turned 20 when he was handed the chance to impress Wenger during a trial with the north Londoners in the summer of 2003.

The youngster didn’t have to look far for inspiration. His older brother, Kolo, had earned a contract with Arsenal during a similar arrangement a year earlier, albeit in unconventional circumstances.

“I remember the ball was rolled into Thierry Henry and Kole Toure, from nowhere, smashed into him from behind,” former Gunners midfielder Ray Parlour wrote in his book ‘Arsene Wenger: The Inside Story of Arsenal Under Wenger’.

“It was a terrible tackle, a red card in a normal game, and our best player was rolling around.

Here he is talking about his first day at Arsenal and the infamous slide tackle on Arsene Wenger 😂 pic.twitter.com/g95Xtk3tCp

“Wenger was shouting, ‘Kolo, what are you doing? Don’t tackle!’ The next minute, the ball was into Dennis Bergkamp and Kolo did exactly the same … Anyway, Wenger said, ‘No more tackling.’

“So next thing you know, Kolo Toure took him [Wenger] out with a two-footed tackle! All you could hear was Wenger screaming.

“Kolo was nearly in tears, his big day ruined. I went into the medical room and there was Arsene with an ice pack on his ankle. I said, ‘I don’t think he meant it.’ He told me there and then, ‘We’re signing him tomorrow. I like his desire.’”

Rather than have to assault key first-team players and the manager, Yaya was given the chance to impress in a much more traditional format: a pre-season friendly at Conference outfit Barnet.

Wenger had been aware of Toure when the Ivorian was just 15, tracking his progress to Beveren, the Belgian club where he played alongside future Gunners Emmanuel Eboue and Gervinho.

“Yaya Toure is a top-class player,” Wenger later said. “We knew that at the time.

“The only problem was to fix him into a position because he can play everywhere. He can play centre-back, as a second striker, as a midfielder and for a long time we didn’t know where to play him.”

ON THIS DAY: In 2003, Yaya Touré played for an Arsenal side that drew 0-0 with Barnet in a pre-season friendly.

Wenger had a similar problem with Kolo, playing him in midfield and at full-back before he eventually developed into the formidable centre-back who became a cornerstone of the Invincibles. Indeed, on that day in Barnet, Kolo was deployed in midfield alongside Yaya.

Another trialist appeared in Gael Clichy, who had a vastly different future at Arsenal than Yaya Toure, playing over 250 games for the club before the two apprentices were eventually reunited at Manchester City.

Despite the likes of Thierry Henry and Patrick Vieira missing, it was still a strong team. Lauren, Sol Campbell and Martin Keown all made appearances, while Ray Parlour and Edu completed the midfield. A number of youngsters such as Graham Stack, Jerome Thomas and John Halls were given run outs.

In front of just shy of 5,000 fans, the first half passed by without much in the way of excitement. Even Richard Clarke, reporting for Arsenal’s official website, conceded: “In all honesty the first half was a bit flat.”

But that didn’t stop him talking up Toure, writing: “Yaya has the build and languid touch of Patrick Vieira. The similarity was sealed by the fact that he started the afternoon in central midfield and was wearing Arsenal’s No.4 shirt.”

After numerous changes at half-time, Toure was pushed forward into a more advanced role, operating as a striker alongside Thomas.

That provided Toure with his big chance to grab the limelight, and he couldn’t have asked for a better opportunity to score than that provided to him by Quincy Owusu-Abeyie, who skipped to the byline and put in a smart cross to the back post.

The afternoon as a footballing spectacle was best summed up with three minutes to go when Barnet brought on Steve Pankhurst, the co-founder of Friends Reunited, who had paid £5,500 at an auction for the chance to play.

“It looked like the 39-year-old would not get a touch, but he restarted the play after a drop ball and as he dribbled upfield the referee blew for full time,” concluded Arsenal’s match report.

I saw Yaya Toure play upfront for Arsenal in a trial at Barnet. He missed a sitter.

While the Gunners went unbeaten in the Premier League the following season, Yaya Toure was forced to watch from afar.

Despite an underwhelming display against Barnet, Wenger was still interested in signing the midfielder, but any potential deal hit a stumbling block as he was yet to make his international debut for Ivory Coast. Whereas Kolo had already been capped when he left  ASEC Mimosas for north London, Yaya did not make his senior bow until 2004.

“In England, to get the players in they need to have played 75% of national games, but Yaya never did [for Ivory Coast],” Wenger later reflected.

“We decided to wait for the passport application and then, when he was close to applying, he moved to Ukraine [to Metalurh Donetsk] so we lost the whole chance of the deal.”

Maybe Wenger does deserve some sympathy for missing out on this one, and at least Gooners actually got the chance to see Yaya Toure in an Arsenal shirt.

Given the success Toure went on to have while Arsenal floundered in the absence of a high-class central midfielder, that’s probably scant consolation.