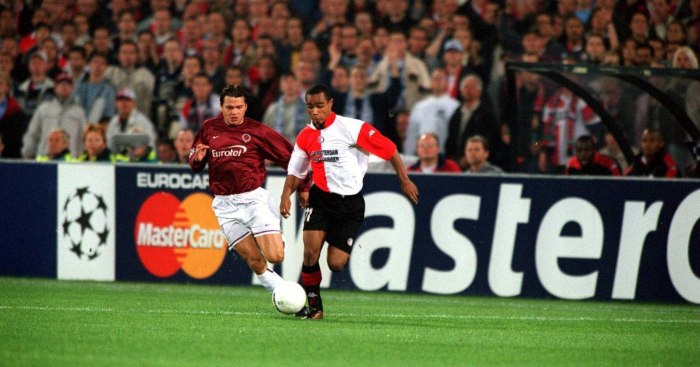 Leonardo Santiago was captured on film for a Dutch documentary about Brazilian favelas. The film led to him having a successful career in the Eredivisie.

In the scientific world, the observer effect is a theory that you can’t observe something without also altering it.

A mercury thermometer, for example, has to absorb or lose a tiny amount of thermal energy in order to record a temperature, so the act of measurement actually changes the temperature around the thermometer.

Dull as that sounds, it’s a major issue in quantum physics.

You have to wonder whether Dutch filmmaker Jos de Putter considered the observer effect when making his documentary Solo, de wet van de favela (Solo, the law of the favela).

In the 1994 picture, De Putter and his crew walked around the streets of Rio to film children who dreamed of becoming footballers, the end product being a slow but mesmerising depiction of local life, clocking in at just under an hour.

At the centre of the film’s events are two 11-year-old boys, Leonardo and Anselmo.

De Putter follows them as they spend their days practicing and trying to make it as professionals, while at the same time the boys’ families watch the 1994 World Cup unfold on boxy little televisions.

In the end, the events that unfold are far more captivating than those of, let’s say, Goal! — a movie based on a not dissimilar premise.

The confident, bad-tempered Leonardo impresses at a trial, while the quiet Anselmo flops after his dad forgets to bring him his kit. (In the end, he must borrow some oversized boots for the big match: a nightmare far more relatable than anything dreamed up by a scriptwriter.)

As the film draws to a close, Leonardo is offered a contract with Flamengo, while Fluminense decide that it is not worth paying Anselmo’s bus fare to bring him to training.

The inseparable duo must therefore go their separate ways.

“Our friendship is over,” Leonardo laments, as they place Romario — a product of their own neighbourhood — into a World Cup sticker album.

One is well documented: Solo, de wet van de favela was a success after being shown at an Amsterdam film festival.

The other is less clear. For whatever reason, Leonardo de Vitor Santiago did not make it at Flamengo. If he ever formally joined the academy, he must have left soon after, since there is no record of his time at the club.

But events in the Netherlands and Brazil would soon collide.

As it happened, viewers of the documentary included Frans Bouwmeester and Piet de Visser, both then scouting for Feyenoord.

After seeing the artfully directed shots of Leonardo playing on the streets, they decided to track down the young Brazilian to see if they could bring him to Rotterdam.

“We saw him at work on the street,” De Visser told Dutch newspaper Trouw in November 2000.

“He had something extra. ‘That could be a big one,’ we said to each other. And he will be a big one — especially because he is convinced of it himself.”

By 1995, just a year after the filming of Solo, de wet van de favela, Leonardo signed for Feyenoord, and he spent his teenage years in the Netherlands, honing his skills alongside the likes of Robin van Persie, Daryl Janmaat and Ebi Smolarek.

By August 2000 he had made his first-team debut, and in November of that year he set up a goal with a rabona.

What followed was also deserving of a movie.

It was discovered that Leonardo was not actually eligible to play for Feyenoord. The Brazilian had been using a fake Portuguese passport to qualify as an EU citizen, since non-EU players could not play before their 18th birthday.

A criminal case began, and the promising winger had to sit out.

Although Leonardo claimed he was unaware of the document’s invalidity, he was fined 5,000 guilders and ordered to complete 40 hours of community service, which he spent installing road signs in Rotterdam.

In the end, the passport scandal only kept the winger out of action for a few months of the 2000–01 season, and he returned the following campaign for a huge moment in Feyenoord’s history.

Although the Rotterdam club only finished third in the Eredivisie, they reached the final of the UEFA Cup.

Fate decreed that the match would be held at Feyenoord’s De Kuip stadium.

That night, in which Feyenoord overcame Dortmund in a dramatic 3-2 win, belonged to Pierre van Hooijdonk, whose two goals gave the Dutch side the edge, but it was also a gigantic occasion for 19-year-old Leonardo, who replaced Robin van Persie in the 63rd minute.

The two players would remain friends over the years, and Van Persie even wrote a foreword for a book about the Brazilian winger.

“I was sure he would be a winner,” Van Persie wrote. “He was good, this boy, truly The King.”

The legendary striker was half right.

Leonardo collected his UEFA Cup winner’s medal, but the following seasons were fraught with injuries and disagreements with managers.

Between the summer of 2002 and January 2006, the winger made only 11 league appearances.

Ruud Gullit didn’t like his attitude, and Gullit’s successor Erwin Koeman paid little attention to a difficult player now very much on the fringes.

A psychologist might have connected those disciplinary issues with a gripping scene in Solo, de wet van de favela.

In a local match, 11-year-old Leonardo shoves over the opposition goalkeeper. After the game, a woman on the sidelines questions his behaviour, to which the youngster responds with foul-mouthed fury, eventually bursting into tears.

With so much drama packed into his early life, had Leonardo burned out at 22?

After a decade at Feyenoord, Leonardo left for pastures new in January 2006, but he didn’t go very far.

His destination was Breda, a three-hour bike ride south of Rotterdam, where Eredivisie strugglers NAC Breda were looking for some inspiration.

Leonardo provided it, plundering an impressive eight goals and two assists in 14 matches to help the club survive.

In fact, so impressive were his performances, he would stay with the minnows only 12 months. For a while, it looked like his next destination might be Tottenham or even Arsenal in the Premier League.

“Martin Jol … hopes Leonardo’s pace will provide balance to Aaron Lennon’s on the right flank,” explained Matt Scott of The Guardian ahead of the 2007 winter transfer window.

In reality, the 23-year-old ended up at Ajax, making him something of a pariah with Rotterdam fans but enjoying two and a half mostly impressive seasons in Amsterdam.

He followed his Ajax days with another two years at NAC Breda, then had brief spells in Austria (where he won the only league title of his career), Hungary (where Ferencvaros fans still remember him fondly), Germany and even Australia.

He ended his career in the Dutch second tier with FC Eindhoven, becoming a naturalised Dutch citizen in order to play.

In truth, Leonardo never reached the heights of boyhood idol Romario or fellow bad boy Robin van Persie, and observers are divided over whether he might have achieved more.

He was certainly never a willing runner. Take the source with a pinch of salt, but the scouts at Football Manager, generally known for their diligence and resistance to hyperbole, rated Leonardo’s work rate at 1/20 during his second Breda stint, suggesting he played football at 5% capacity.

No wonder his managers found him difficult.

But you also have to give plenty of slack to a player who moved from Rio to Rotterdam, away from his mother, at the age of 12.

In fact, although Leonardo got his fair share of media criticism in the Netherlands, the Feyenoord scouting department got even more for signing him.

De Visser, now a personal advisor to Roman Abramovich, was accused of being a kinderlokker, a child lurer, and of bribing young boys’ parents with trinkets.

In 2014, coming full circle, Leonardo mulled over his life in a sequel to Solo, de wet van de favela, reuniting with Anselmo, who still lives in Rio.

The original film altered the course of Leonardo’s life. It’s hard to tell whether he’d rescript it.

When Pierre van Hooijdonk conquered Europe for Feyenoord all by himself