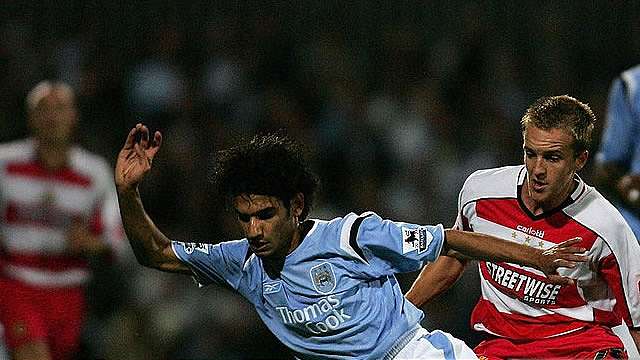 In the early 2000s, Hussein Yasser managed to sign for both Manchester clubs. He was no Andy Cole though.

Only a handful of players have crossed the Manchester divide, playing for both United and City. You’ve heard of most of them: Andy Cole, Peter Schmeichel, Owen Hargreaves…

But what about Hussein Yasser?

Once the bright young thing of Qatari football, midfielder Yasser was signed by Sir Alex Ferguson’s Manchester United in the summer of 2002 and stayed on the books until 2004.

Then, in 2005, he turned out for Stuart Pearce’s Manchester City.

The Qatari didn’t set the Premier League alight for either team – his sole City appearance came in the League Cup – but his career was filled with incident.

Loved by the Reds

Back in 2002, 18-year-old Hussein Yasser was playing for Al Rayyan in the Qatari league while earning senior caps for his country. And then he got the call every youngster dreams of.

Manchester United, who had just spent big money on Rio Ferdinand, were interested in buying him.

The dream quickly became reality. United and Al Rayyan completed the paperwork, and Yasser got ready to pull on the famous red shirt. Premier League, here we come.

Unfortunately for Yasser, it was actually the red shirt of Royal Antwerp F.C.

Since the Qatari was a teenager had just a handful of international caps, he couldn’t get a British work permit.

So United sent him off to their loan farm club, where he could play right away and eventually gain Belgian citizenship.

It wasn’t Manchester United, but it was an exciting new adventure in Europe.

Feared by the Brugge

Yasser made his debut in late August and was given his first start a few weeks later.

It took just nine minutes for the young Qatari to open the scoring, chasing a flick-on and drilling the ball past the Brugge keeper in a 2-2 draw.

Yasser was sent off a few games later and didn’t score another league goal over the 2002–03 season, but he played 21 times as Antwerp finished 12th.

Overall, United could be happy with his progress.

For the 2003–04 season, Yasser stayed in Belgium to continue his path toward European citizenship.

This time, however, he brought half of Manchester United’s reserves with him.

Phil Bardsley, Dong Fangzhuo, David Fox, Arthur Gomez, Colin Heath, Eddie Johnson and Souleymane Mamam all joined Antwerp on loan at some point during the campaign — either for work permit reasons or because they weren’t very good.

“We have never had more [United] players involved and it is going really well,” said Paul Bistiaux, Antwerp’s general secretary at the time.

It was actually going terribly.

The season started with a face-off between two future Manchester City players, as Yasser’s Antwerp traveled to Vincent Kompany’s Anderlecht.

And although Yasser got an assist, it was 17-year-old Kompany who came out on top as Anderlecht won 3-1.

From there it went from bad to worse for Antwerp, whose Manchester also-rans failed to provide any kind of Premier League quality. Bardsley, for instance, was sent off on his first start, and Antwerp failed to win in any of his six appearances.

Yasser did at least manage one win over the 2003–04 season, but poor performances meant his time was up before Christmas. In his last league game for Antwerp, on 20 December, 2003, he was hooked at half-time.

Yasser had not done enough to prove he could compete with the likes of Ryan Giggs and Cristiano Ronaldo, and he moved quietly to Cyprus at the start of the 2004–05 season, where he scored four goals for AEL Limassol before moving back to Qatar with Al Sadd.

The European adventure was over. Or was it?

In the summer of 2005, Algerian midfielder Ali Benarbia, a Manchester City legend, was also playing in Qatar, where he had seen Yasser in action.

Just a few years earlier, Benarbia had lined up alongside Stuart Pearce, who was now City’s manager. And now Benarbia had a special recommendation for his old mate.

His advice? Sign 34-year-old Pep Guardiola, who had just spent two seasons in the Qatar Stars League. Oh, and sign Yasser too, if you want.

An obedient Pearce offered trials to both players.

However, the man who would later choose Micah Richards over David Beckham did exactly what you’d expect him to, eventually offering a contract to Yasser but passing on the legendary Guardiola.

Andy Cole, who also signed for City that summer, later said of the Guardiola snub: “Pearce made some odd decisions.”

Yasser’s City career went infinitely better than his time at United, in that he was at least given a squad number.

“I’ve already had a great reception from the City fans, so I hope this is the start of a great career with City,” he enthused.

And on 21 September, 2005, City’s new No.20 made his first appearance in English football. The opponents were Doncaster Rovers. The occasion was the Carling Cup second round.

In fairness to him, Yasser wasn’t City’s worst player, and he almost scored a debut goal, missing a header from a corner. Pearce subbed him in the 65th minute, and City proceeded to lose on penalties.

“We’ll just have to make sure we don’t have too many more bad days,” said the manager after the game.

But Yasser wouldn’t get a chance to experience any more good or bad days. He was released in January, and the Doncaster defeat would be his sole appearance in English football.

While signing for both Manchester clubs might seem like a career highlight for most players, Yasser’s career amounted to more than just Premier League trivia.

Upon his release from City, the midfielder spent a season with former club Al Rayyan in Qatar. But in 2007 he headed back west to join Braga in Portgual, where he became the first Qatari to play in the UEFA Cup.

He made his mark, too: in a game against Hammarby, he scored a goal and assisted two others after coming on as a second-half substitute.

“That was the best stint of my career,” he later recalled. “I was trying hard to fulfil my personal ambitions and become part of a great club.”

Strangely, he left Braga after just half a season to join another Portuguese club, Boavista.

Yasser was also a regular for the Qatari national side and played against Lionel Messi, Carlos Tevez and Juan Roman Riquelme in a 2005 friendly between Qatar and Argentina.

Sadly though, his international career ended in disgrace.

“We’ll certainly make the most of home advantage, because Qatari fans are faithful to their teams and great football lovers,” Yasser said.

But after being subbed off in the opening match — a 0-2 defeat to Uzbekistan — the midfielder kicked up a fuss and was eventually sent home for ill-discipline.

“Yasser was removed because his response wasn’t up to the expectations and he was absent from some training sessions,” said team manager Abdulrahman Al Mahmoud.

He made one more appearance for the national team, coming on as a substitute in a World Cup qualifier in September 2011.

His final club years were spent between Egypt, Qatar and Belgium, where he briefly became Qatar’s best-paid athlete at Lierse.

In November 2017, while playing for Egyptian side Wadi Degla, Yasser scored his last ever goal, this ugly but useful strike which set his team on course for a dramatic 3-3 comeback.

Rene Meulensteen, who had managed the Qatari Under-18 team before joining United as a youth coach, set up Yasser’s transfer to Manchester United.

After that, it was the kind words of Ali Benarbia that took Yasser to City, while Portuguese international Joao Tomas helped facilitate his 2007 switch from Al Rayyan to Braga.

The opportunities were clearly too good to refuse, but were they the right moves at the right time?

Frankly, it doesn’t really matter. Despite failing to make an impact at United and City, Yasser surely won’t regret such a unique career path.