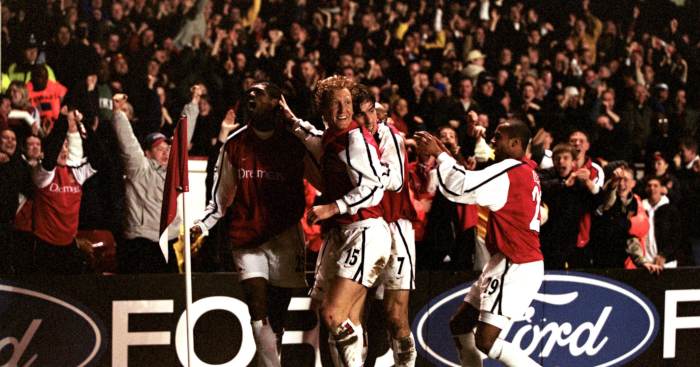 Arsenal may have ultimately been knocked out of the 2001 Champions League quarter-finals by Valencia, but their 2-1 first-leg victory was defined by two minutes which encapsulated the best of the Gunners under Arsene Wenger.

This was a serious Valencia team, featuring the likes of Roberto Ayala, Ruben Baraja, Gaizka Mendieta and Pablo Aimar, and they would end the season as runners-up in the competition before winning La Liga under Rafa Benitez the following season.

Arsenal, meanwhile, endured something of a lean year, finishing as runners-up in the Premier League to Manchester United and in the FA Cup to Liverpool. But they would bounce back to win a second Double under Wenger in 2001-02.

And in just two minutes against Valencia at Highbury, the Gunners displayed all the qualities which would see them eclipse Sir Alex Ferguson’s Manchester United 12 months later.

Valencia had taken control of the game in the first half and scored what turned out to be the crucial away goal just before half-time, volleying home after Arsenal failed to clear a cross from Mendieta.

But Arsenal wrestled back control on the hour mark with a combination of grit and class, a cocktail they struggled to concoct in the latter years of Wenger’s reign.

The shift in momentum was helped by Wenger’s decision to replace Freddie Ljungberg and Sylvain Wiltord at half-time, but Patrick Vieira provided the main inspiration dominating the midfield almost single-handed as Arsenal pushed forward to find a goal in a personal performance described as “phenomenal” by his manager.

And it was Vieira’s surging run from his own half to the edge of Valencia’s box which brought about the opening, with the opposition appearing too in awe of the marauding giant to even attempt to get a foot in.

The midfielder worked the ball to the left, where the fresh impetus of Wiltord got to the byline past veteran right-back Jocelyn Angloma, who had been a target all night.

Wiltord’s cross was miscontrolled by Nwankwo Kanu, only for Robert Pires to sum up the sudden transformation in Arsenal by marrying style and substance to win the race to the loose ball and swiftly backheel it into Thierry Henry’s path.

We don’t need to tell you what happened once Henry had the ball at his feet with the goal at his mercy, do we?

Straight from kick-off, Vieira once again showed quick fee to dance past three Valencia players who were deluded into thinking they had him trapped, but the move broke down.

The ball was quickly fed into Vieira’s feet on the centre circle again, when he skilfully turned away from two players but this time hit the ground upon the sight of the third, grabbing the ball in a stubborn act of bastardy with the referee too scared not to give a free-kick.

In an instant he played the ball towards Kanu, whose touch once again appeared clumsy, and so Ray Parlour had the strength of character to take matters into his own hands.

Stealing the ball from his own team-mate, Parlour followed Vieira’s lead by plundering forward and f*cking leathering it right into the top f*cking corner so just f*cking f*ck off, alright?

“Parlour’s goal was the symbol of the difference between our first- and second-half performance,” Wenger said afterwards. “We had that determination we didn’t show in the first half.”

Within two minutes, Valencia had gone from dominating to being dominated, all because Arsenal – Vieira in particular – were as willing to battle as well as bamboozle.

Ultimately, the Gunners could, and should, have scored more. Henry was played through on goal but “had too much time”, according to Wenger, and uncharacteristically failed to find the back of the net.

Those misses proved costly as John Carew scored the only goal of the second leg to see Valencia qualify on away goals. But while Arsenal failed to triumph over 180 minutes, they more than proved their point in just two.