The 2003-04 Premier League season is remembered by most for Arsenal’s Invincibles, but don’t ever forget that, across north London, Tottenham were involved in an equally remarkable campaign.

It was a season in which the old Spurs, a Spurs we can hardly associate with the club now, truly perfected being, well, a bit sh*t.

Going into the season after two years of mid-table mediocrity under Glenn Hoddle, the pressure was on to get results from the start.

Named Premier League Manager of the Month for October 2001 and August 2002, Hoddle’s team had started both campaigns brightly only to tail off badly, finishing ninth and 10th respectively.

Determined to buck the trend, the summer of 2003 saw Hoddle embark on a mini-overhaul of the Spurs squad. Out went Ben Thatcher, Steffen Iversen and Teddy Sheringham with Chris Perry following soon after.

In came promising centre back and South Africa captain Mbuelelo Mabizela, along with Bobby Zamora from Brighton. Winger Matthew Etherington was sold to West Ham in part-exchange for Frederic Kanoute, while chairman Daniel Levy sanctioned a £6.25million move for Porto striker Helder Postiga.

“There’s not multi, multi-millions for us to spend, but we have to be progressive,” Hoddle said at the Portuguese’s unveiling. “In two or three years’ time I believe people will look at this signing and say it was a good bit of business.

“There’s a balance in the transfer market and I think we’ve got that right.” Hoddle couldn’t have been more wrong.

From Tottenham’s opening day defeat to newly-promoted Birmingham City, it was clear something was amiss with the club’s new additions – starting with Postiga.

Arriving off the back of a 19-goal, treble-winning campaign with Porto, the 20-year-old made a rod for his own back before the season even began after describing Spurs as a stepping stone.

“Tottenham are a Premiership club with a lot of history and that’s worth everything,” Postiga told reporters. “But I’m not ruling out the move being a trampoline where we all end up as winners.”

Under pressure to live up to his price tag and apparent arrogance, Postiga looked shorn of confidence and was hauled off less than an hour into his debut. It would become a familiar pattern.

“Over here it is more physical and quicker,” Postiga explained to the Evening Standard. “Back home, it is slower. I need to play for a few games to get used to the game here.”

“I’ve not had the luck in games I’ve played in so far, but maybe it will change soon. I will be happy to score a goal that goes in off my knee.”

Postiga wouldn’t get off the mark until December and would have to wait until January before scoring in the Premier League. It would prove to be his only league goal for the club before he headed back to Porto, at a significant loss, the following season.

The next Lucas Radebe

Despite that opening day defeat, victory over Leeds coupled with a draw against Liverpool suggested Hoddle’s Tottenham had turned a corner. They were soon brought back down to earth with an embarrassing 3-0 home defeat to Fulham that laid their defensive frailties bear in the process.

While Ledley King was a quality defender, he was the exception to the rule at Spurs.

Much of the blame lay at Hoddle’s door after he shelled out hefty sums on Goran Bunjevcevic and Dean Richards only to see both players struggle for form and fitness.

Hoddle did little to solve the issue over the summer of 2003, though, evidently confident Anthony Gardner could make the step up along with new recruit Mabizela.

Though Gardner endured a nightmare season, his contribution proved more worthwhile than the South African’s.

Signed from Orlando Pirates after impressing in a pre-season friendly against Tottenham, Mabizela’s strength and confidence on the ball saw him dubbed “the next Lucas Radebe”.

But Mabizela was a far cry from the Leeds stalwart. Ill-equipped for the demands of Premier League, he quickly went off the rails, reportedly turning up to training drunk or, on occasion, not at all.

All told, he managed just nine appearances for Tottenham, scoring one memorable goal against Leicester, before his contract was terminated.

It wasn’t just the additions of Postiga and Mabizela that proved to be Hoddle’s undoing – the decision to swap Etherington for Kanoute created further problems of his own making.

Though Kanoute made an explosive start with four goals in his first five games, the deal left Spurs with a top-heavy squad and shorn of their only out and out winger. Bereft of service that season, Robbie Keane would be the only Spurs striker to reach double figures that campaign.

Instead, Hoddle was left with a raft of ageing, injury prone midfielders like Jamie Redknapp, Christian Ziege, Gustavo Poyet and Darren Anderton. All four would retire or be released within a year.

Neither solved Tottenham’s defensive or midfield issues and both failed to see out the season at Spurs with Konchesky recalled by Charlton and Dalmat banished after a training ground brawl with Jamie O’Hara.

They still outlasted Hoddle, though, who was sacked after defeats to former clubs Chelsea and Southampton, with Levy breaking off his honeymoon to announce Hoddle’s dismissal following an “unacceptable lack of progress and any visible sign of improvement”.

He left Tottenham third from bottom with four points from a possible 18.

It couldn’t get much worse – but it did. 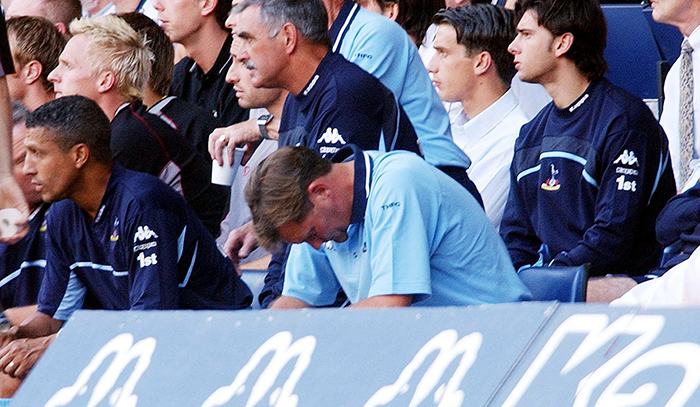 ‘Glenn wanted to be best player’

Director of Football David Pleat stepped in as caretaker manager, prompting an upturn in form that saw Spurs take seven points from the next nine to move up to 12th. And he soon hit out at Hoddle’s management style in a newspaper interview.

“Because of his pride, Glenn wanted to be the best player in training every day – at 46 years of age,” Pleat claimed. “Can you imagine [Arsène] Wenger playing with Thierry Henry and the rest?”

Hoddle laid bare the club’s internal struggles with his reply: “To get the success the fans crave, in my opinion, there is only one solution – give David the job because the position he holds at the club is making it enormously difficult for a manager to succeed.”

Spurs subsequently slumped to another dismal run of form that saw them win just two of the next 10 league games to end the year in the relegation zone.

That run included a miserable 2-1 defeat to Arsenal in a game Tottenham really should have won.

Despite taking an early lead through Anderton, Postiga contrived to miss a string of gilt-edged chances and, with time ticking on, the Gunners rallied, scoring through Robert Pires and, fortuitously, Freddie Ljungberg to secure victory. It was a day that would come back to haunt Spurs fans.

‘We have let ourselves down’

The cup competitions did offer some respite. For a time.

Despite their shortcomings in the league, Tottenham progressed to the fifth round of the League Cup where they faced Middlesbrough at White Hart Lane.

An Anderton goal after 63 seconds got Spurs off to the perfect start with a semi-final meeting with Arsenal looming, but Tottenham couldn’t hold on, conceding with four minutes to go before losing on penalties.

Worse was to come in the FA Cup. After progressing through the third round, Spurs found themselves 3-0 up at half-time against Manchester City, who had had Joey Barton sent off, in their fourth-round replay at White Hart Lane.

But this was no ordinary Tottenham team. In the space of just 45 minutes, Pleat’s charges contrived to concede four times and lose 4-3, with the Spurs defence failing to deal with a series of crosses and the pace of Shaun Wright-Phillips. 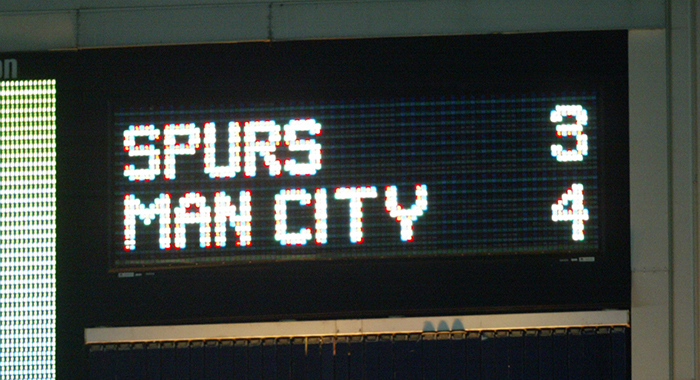 City’s first win of any kind in 18 games, the turnaround was made all the more astonishing for the fact Nicolas Anelka had limped off in the first half.

Alan Hansen heralded it as the greatest FA Cup ever comeback, but Pleat knew better, telling reporters: “We have let ourselves down”.

Despite calamitous exits from both cup competitions, by the start of 2004 the general gloom around Tottenham had started to lift.

Michael Brown was signed from Sheffield United to add some much-needed tenacity to the midfield while Zamora was offloaded after 16 goalless appearances in a cash plus player deal for West Ham’s Jermain Defoe.

From January to mid-March, Spurs picked up 19 points from the next 27 available to ease any relegation concerns and climb to 10th, just six points off fourth and an unlikely Champions League qualification place.

But just when it seemed like they might pull off the unexpected, the entirely predictable reared its ugly head again. A rancid 3-0 defeat to Manchester United kicked off another rotten run of form that saw Spurs gain just one point from the next 18 available.

By the time Arsenal visited White Hart Lane in late April, Tottenham had little to play for other than pride and their place in history.

Arsenal needed only a draw to wrap up the title and achieve immortality among fans. Avoiding defeat would also ensure they maintained their unbeaten season run.

Thirty-three years prior, the Gunners had secured a league crown at White Hart Lane in a 1-0 win secured via an 88th-minute winner. This time it took Arsenal just three minutes to break the deadlock through Patrick Vieira, with Pires adding a second before half-time.

Spurs rallied late to salvage a draw, but it was irrelevant. Arsenal were crowned champions at the Lane and Tottenham fans would never be allowed to forget it. 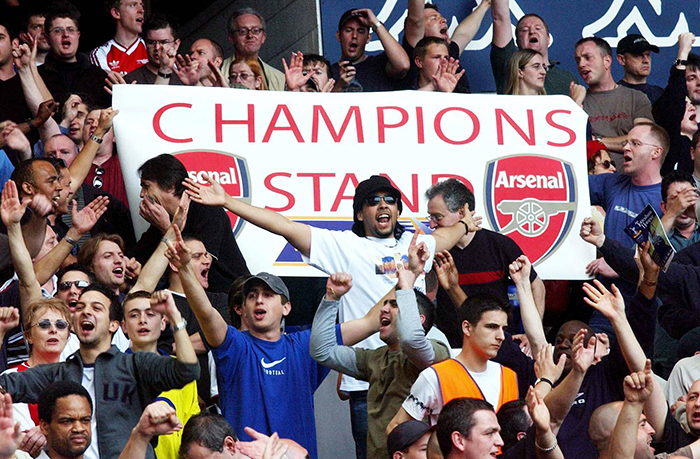 Though a 1-0 win over Blackburn in Tottenham’s final home game halted an eight-game winless run, Daniel Levy hammered the team in the matchday programme, labelling the season “unacceptable” and their form “appalling”.

Spurs finished 14th, their lowest league finish since the 1997-98 campaign. Their minus 10-goal difference was the fifth worst that season, while a tally of 19 defeats equalled their worst ever in the Premier League.

Arsenal, meanwhile, ended the season unbeaten, 45 points clear of Tottenham having conceded less than half the number of goals.

That summer France manager Jacques Santini was unveiled as Hoddle’s permanent replacement. And we all know how well that went.