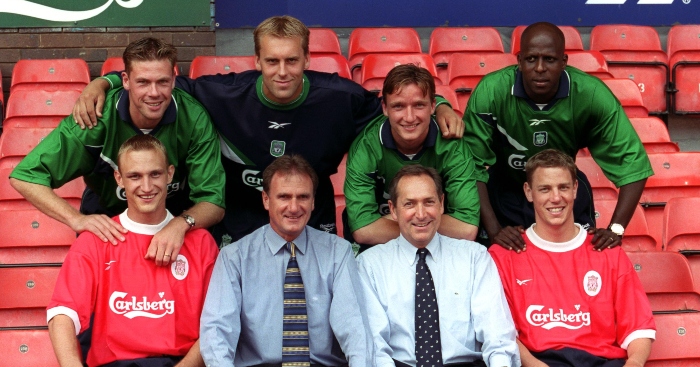 As if Gerard Houllier being initially appointed as *joint* manager at Liverpool wasn’t unusual enough, his early signings at Anfield ensured things got really weird.

Appointed initially as a co-manager alongside Roy Evans when having two bosses was curiously in vogue in England, Houllier was tasked with changing the mentality at Anfield, ridding Liverpool of their ‘Spice Boys’ tag.

As a result, personnel had to change. From the summer of 1998 to the summer of 1999, loyal servants Jason McAteer, Neil Ruddock, Rob Jones, Steve Harkness and Steve McManaman all left the club.

Long term, the changes Houllier made to the squad led to the club winning the Champions League in 2005, but to describe the players initially signed to replace the old guard as hit and miss would be an understatement as big as Ruddock’s gut.

Under Houllier and Evans’ co-management, Sean Dundee, Vegard Heggem and Steve Staunton joined. Dundee is remembered as one of Liverpool’s worst ever players, yet things only got weirder once Houllier was given full control.

Sentiment allowed Evans to initially remain at the club as Liverpool sought to retain a final link to the acclaimed boot room of the Bill Shankly era, but by November Evans decided to step aside and end an association with the Reds which dated back to 1965.

As Houllier continued to revamp the squad, his first 11 signings could hardly have been more contrasting. There were certainly some big ‘hits’ among the latter six, but the first five undoubtedly, categorically, without any question whatsoever, fall firmly into the ‘misses’ category.

The first came just two weeks after Evans’ departure when Jean-Michel Ferri arrived in a £1.7million deal from Istanbulspor, a “Frenchman with a solid if unspectacular CV”, as described by The Guardian at the time of the move. 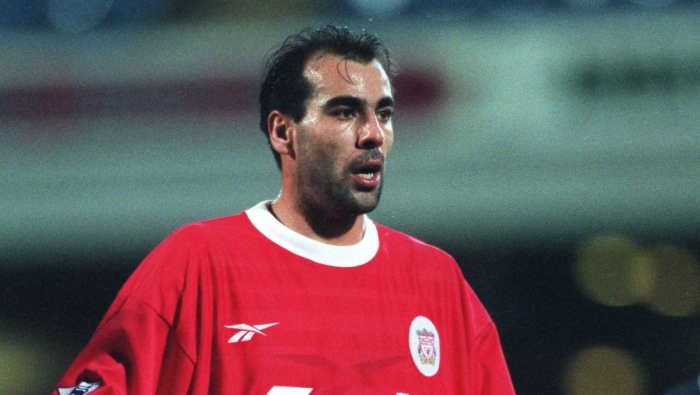 Ferri’s shot spell at Istanbulspor had seen him sign a pay-as-you-play deal, only for the club’s president to forbid the coach from picking him. And the midfielder hardly fared much better on Merseyside, making two substitute appearances totalling around 50 minutes of first-team football before being sold to Sochaux at the end of the season.

As far as statement signings go, Ferri certainly didn’t fall into that category. And Houllier’s next four signings hardly set pulses racing either.

Young prospect Frode Kippe joined from Lillestrom – where remarkably he still turns out today at the age of 41 – but, like Ferri, made just two substitute appearances before spending the majority of his time at Anfield on loan at Stoke City.

Two more centre-backs arrived mid-season in the shape of Rigobert Song and Djimi Traore, and while both became something of cult heroes among Reds fans, it’s fair to say neither will go down in the folklore of great Liverpool defenders – despite Traore famously being part of the side which won the 2005 Champions League.

#OnThisDay in 2005, #LFC defender Djimi Traoré scored one of the all-time great own goals in an FA Cup tie against Burnley at Turf Moor.

It really is special. pic.twitter.com/j7sBB3bDxD

Completing the quintet, Erik Meijer made Liverpool the ninth club of his senior career by moving on a free transfer from Bayer Leverkusen, eventually making Preston North End the 10th after dropping down a division on loan after failing to make an impact at Anfield.

Meijer joined Liverpool at the end of June 1999, but that month was also when Houllier suddenly decided he’d probably better signing some actual decent players, too.

Okay, they weren’t all brilliant success. Titi Camara was only fleetingly a crowd favourite, while Sander Westerveld was far more inconsistent than hoped for a goalkeeper signed for a British record £4million fee.

But the following four signings that summer helped form the foundations which would benefit both Houllier and Rafa Benitez.

Sami Hyypia’s £2.6million arrival from Willem II will go down as one of English football’s great bargains, and a month later he was joined by the man alongside he would help form a formidable defence around in Stephane Henchoz – another bargain for just £3.5million from Blackburn.

With his backline bolstered by June, Houllier could turn his attention to midfield in July. Didi Hamann was the costliest signing at £8million from Newcastle United, but the Germany international provided nous in front of the back four for the next seven years – most notably making a game-changing introduction at half-time against AC Milan in Istanbul.

Vladimir Smicer, meanwhile, moved to Anfield to help replace the flair of McManaman from the flanks. And like Hamann, the Czech Republic international will always be fondly remembered by Reds supporters for playing an important role from the bench in the 2005 Champions League final, replacing Harry Kewell to score Liverpool’s second goal.

Ultimately, Houllier’s six years in charge of Liverpool were characterised by a number of both ups and downs. Perhaps that’s what he was trying to prepare us for all along with his signings that first year.