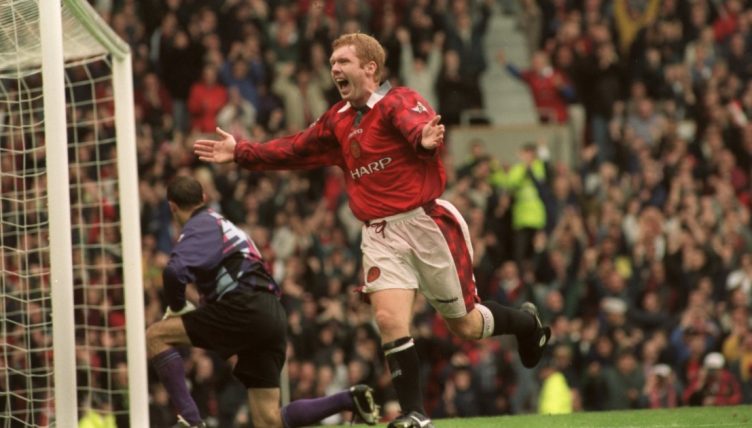 Paul Scholes is widely regarded as one of the most gifted English midfielders of all time, but there is much more to be admired about that Manchester United legend than simply his technique.

“Paul Scholes is a role model. For me – and I really mean this – he’s the best central midfielder I’ve seen in the last 15, 20 years” – Xavi Hernandez.

“My toughest opponent? Scholes of Manchester. He is the complete midfielder. Scholes is undoubtedly the greatest midfielder of his generation – Zinedine Zidane.

Those two quotes alone – given who they came from – tell you everything you need to know about how good a player Scholes was.

Even Sir Bobby Charlton, who has seen and played alongside players including George Best, Duncan Edwards and Bryan Robson, said “in so many ways Scholes is my favourite”.

But the fact Scholes became as revered as he is for his technique, despite being small, asthmatic and short-sighted, speaks volumes about his attitude and character.

And in an era when rocketing salaries saw football stars drift away from the man in the street, as Roy Keane put it, Scholes remained “an unaffected human being” with “no celebrity bullsh*t, no self-promotion, just an amazingly gifted player.”

No wonder he is so loved.

More chilled than the Neville brothers; more gifted than Nicky Butt; in some respects, Scholes could be seen as a more placid Roy Keane. After all, only Roy Keane can be as intense as Roy Keane and yet still remain a fully-functioning member of society.

The two certainly shared a disdain for certain aspects of the modern game that some of the Against Modern Football fans also hold.

It’s just that Keane couldn’t, or rather refused to, keep a lid on his.

Scholes would just shrug and go about his business of switching play 60 yards while landing the ball onto a pre-specified blade of glass. 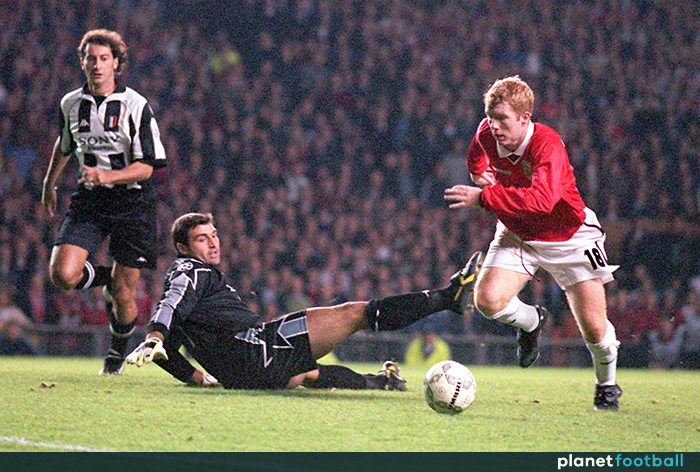 Eye for a challenge

That is not to say Scholes always kept his temperament in check. If there was an injustice to rail against, be it to himself or his team, the Salfordian would usually try to redress the balance.

But, like his passing, the art of vengeance was often to be found in his timing.

For years, Scholes hoodwinked into believing he couldn’t tackle. It became a cliche that many would simply laugh off. “Paul Scholes – what a player! Shame he can’t tackle hahaha…”

Scholes would doubtless laugh harder than anyone else. Perhaps more of a snigger to himself that would illustrate the dark side that Arsene Wenger once spoke of.

“Of course I can tackle,” he told 5 Live in 2011. “There’s plenty of evidence of me being able to tackle. I was just getting people back. 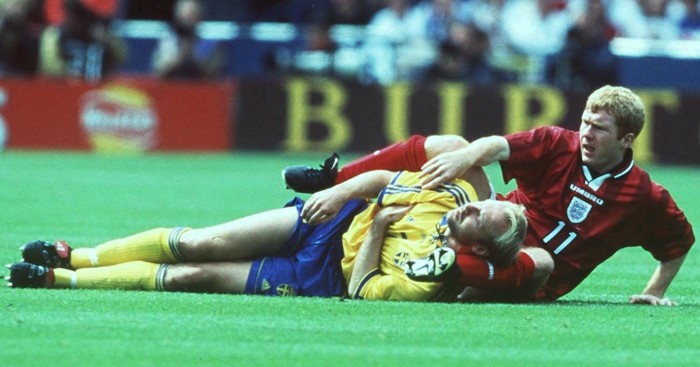 More than likely with a mischievous smile, he added: “I didn’t always do it on purpose. Some of it was just bad timing.”

It wasn’t always about personal revenge. Scholes always knew when a foot needed to be left in, whether it was to gee up his own team-mates or break up the opposition’s momentum.

His tackle on Jose Reyes in the 2004 FA Cup semi-final is a perfect example of all three.

That said, Scholes undoubtedly hurt so many more opponents with his ability than his thirst for a battle.

And, especially to those on the continent who perhaps saw him more in glimpses, it is his all-round, almost flawless talent that he is remembered for.

That those outside these shores were not privileged to witness Scholes on the international scene beyond 2004 is almost as great a shame for them as it is for England.

We may all feel like victims of the seemingly endless debate over Steven Gerrard and Frank Lampard, but few of us have suffered more than the loss of precious time and a little sanity. It cost Scholes his international career.

Not that he ever seemed all that bothered by it.

After 66 caps and becoming fed up of being shunted out to the left to accommodate his two seemingly incompatible team-mates, Scholes thought it best to walk away and better use the time spent away with Sven’s England circus with his family instead. 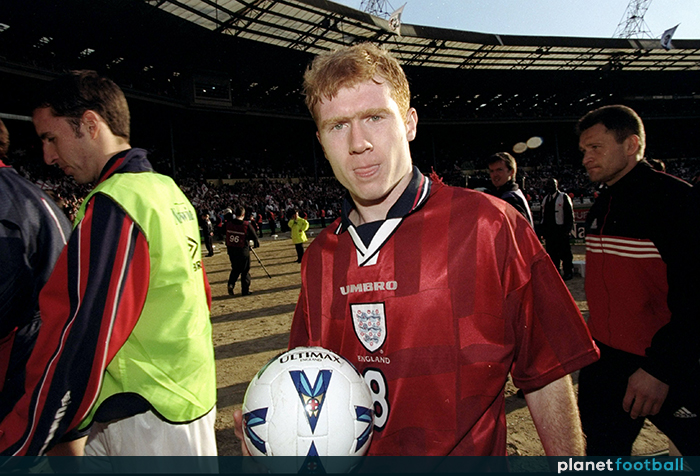 To United fans, the major perk of Scholes shunning the Three Lions to concentrate on his United career was that it lasted longer than it perhaps might have done otherwise.

Indeed, it went on a year and a half longer than it was intended, given the then-37-year-old came out of retirement in 2011.

That episode summed up Scholes and how Ferguson appreciated what he brought United.

How many former Manchester United players could walk into the manager’s office over six months after hanging up his boots because he thought his legs had gone, and walk out with a new contract?

Unlike today, when there would probably have been a cringeworthy unveiling via social media, United kept everything hush-hush, not even telling Scholes’ team-mates about the re-addition to the squad.

The first the press got wind of it was when he stepped off the team coach for an FA Cup third-round tie across town at Manchester City. A couple of hours later, he came off the bench – in shop-bought £50 boots – to help United win 3-2. 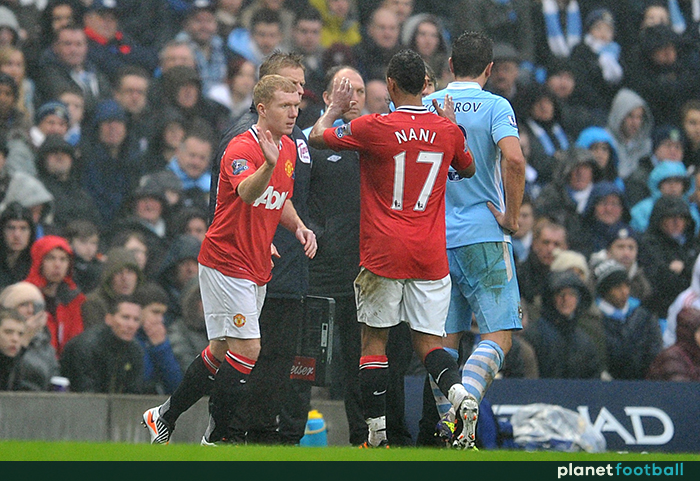 Scholes had by now come to accept that he couldn’t get up and down the pitch and instead settled for a more reserved role, reining in the instinct to make those late darts into the box that had become one of his trademarks – an adjustment highlighted by the fact that he scored five goals or more in only two of his final eight of 19 seasons.

His comeback, though, enabled him to claim another Premier League winners’ medal – it would have been two had Sergio Aguero not interfered in the 93rd minute against QPR in 2012 – and leapfrog Bill Foulkes into third place on the all-time appearances list with 718.

Since retiring for a second and final time, Scholes has found his voice. There was a time you couldn’t get him in front of a camera, but that changed, of course, when it suited him.

Conveniently for his mate Giggs, Scholes wasn’t shy in voicing his criticism of Louis van Gaal a good while before the majority of United fans had grown tired of the Dutchman’s brand of football, while his no-bullsh*t approach to punditry reflects the way he went about his business on the pitch.

His demeanour to some may suggest that he’s bored, but it’s more likely that he’s still coming to terms with the fact that anybody else is interested what he thinks.

He’ll sit in the BT Sport studio looking disinterested before one acerbic comment would cut through a subject like his through balls ripped open defences.

A number of United legends have tarnished their legacy somewhat with their words or actions after retiring, but it’s hard to imagine Scholes ever doing that.

He wouldn’t lose any sleep if he did, but Scholes has got more credit banked than most with United fans, who will always lap up tales of him taking out Gary Neville mid-piss with a Nike-propelled size five from 50 yards.

That pinpoint accuracy, in addition to his vision, creativity, timing and touch, is what Xavi, Zidane, Edgar Davids, Denis Bergkamp, Xabi Alonso, Luis Figo and the like will remember him for.

But there was much more than technique to admire about Scholes. Not that he’d care if you appreciated that.