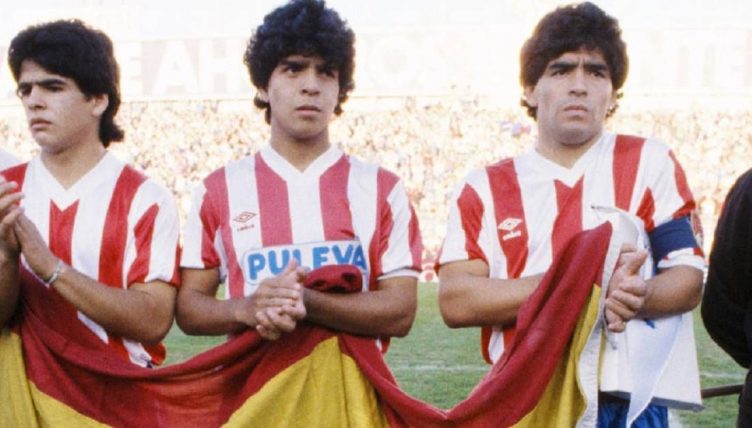 In the autumn of 1987, Granada CF president Alfonso Suarez decided to make a statement – and it was to be bold and brash.

Granada had been promoted from the third to the second tier of Spanish football the previous season, but for Suarez that was not enough. He wanted fame, notoriety.

In the late 80s, there was one surefire way to achieve that. Sign the most famous name in football: Maradona.

Diego had won the World Cup a year prior and had followed that up with a domestic league and cup double for Napoli. He was, then, out of reach for a side in the Segunda Division.

But that did not deter Suarez (or another second-tier side at the time, Leeds United). With Diego off-limits, he opted for Raul, better known as ‘Lalo’, the second of three Maradona brothers and six years Diego’s junior.

The signing, first and foremost, was designed to attract attention. But there was hope that Lalo would be able to genuinely produce with the ball at his feet.

He was 20 at the time and had made a handful of substitute appearances for Diego’s old club Boca Juniors as well as turning out for Argentina’s Under-17 national team a few years prior. He did not have the powerful physique of Diego but reports say that he had a fine left foot.

Before Lalo’s Boca debut, Diego had even said in the Argentinian press that Lalo was “the best of the three”. That sort of talk and the name he carried made Lalo valuable.

When he arrived, Granada claimed to have paid 25 million Spanish pesetas (around €120,000 today) to Boca for his signature. Some reports suggested it might have been as much as triple that. Though nothing was ever confirmed by the involved parties, Diego was said to have met Suarez and stipulated that Lalo must be given a place in the team as a condition of him signing.

The agreement, if true, was not without recompense. As a result of Lalo’s transfer to Andalusia, Diego would play a friendly for Granada.

It was a huge coup for a relatively small club. The match was set for November. As well as Lalo and Diego, it would feature the youngest of the three male siblings, Hugo. Just 18 at the time, Hugo was also trying to make his way in the game and was contracted to Ascoli in Italy’s Serie B.

For some reason, the opponents Granada decided upon were Swedish side Malmo, who had won three consecutive Allsvenskan titles under the tutelage of Roy Hodgson.

“Malmo FF, during an international break, were asked to take a team to Granada – a second division team at the time in Spain – to play this match,” Hodgson said last year.

“We weren’t given real details about why Malmo should be invited to Granada to play a friendly exhibition match but when we got there we found out the reason was Diego Maradona was going to play in the game.”

Diego himself appeared rather more excited about the prospect than south London’s most urbane football manager. “The marvellous idea from Granada of bringing me together with my brothers is a dream that I’ve always wanted to realise,” Diego told the local press. “It will be the first time we all play together in an official match.”

Unsurprisingly, excitement in the town could hardly be contained. The whole Maradona clan was in town; mum, dad and sisters, too. They were greeted at the airport by a crowd and fireworks.

“The saga of the Maradonas will play in its entirety in Granada,” read one headline, text below highlighting that three full pages were dedicated to the game inside the paper. Another led with, “Alfredo Suarez keeps his promise: today Diego Armando Maradona will wear the Granada shirt.”

The Estadio Los Carmenes was packed, locals jammed into every nook and cranny to try to catch a glimpse of Napoli’s Argentinian superstar as he went through his normal pre-match keepy-uppy routine.

Unusually, Diego did not wear the No.10, leaving it instead to Lalo and taking the No.9 and the captain’s armband for himself. Hugo, a deeper-lying midfield player, was left with the No.8. We’d like to think an ironic chant of, “There’s only three Maradonas,” broke out, but that’s perhaps a flitter of the imagination too far.

El Diego got on the ball early, but a thumping challenge from a Swedish defender was quick to arrive. Despite his deity-like presence, it was Hodgson’s well-drilled Malmo side that took a first-half lead.

But the Maradonas would not let the lead stand for long. Diego received a pass in the Malmo half, took it down on his chest and as he did, Lalo made the run beyond him and behind the defence. A perfect pass and a toe-poked finish and the scores were level.

Malmo took the lead again in the second half, but again a Maradona pulled it back. This time it was Diego with a free-kick from just outside the box, sticking it down the ‘keepers side as the Malmo No.1 trotted across to cover the space behind his wall. The Pibe de Oro had given the fans what they desired.

Finally, Granada took the lead, Lalo’s new team-mate Manolo finishing a one-on-one. Diego was delighted and ran over to hug Manolo and celebrate the win in the only semi-official game he had played – and as it turned out, the only game he would play – with all three of them on the same side.

At that point, the season was going well for Granada. They had got off to a fine start and were near the top of the league. As an El Pais report from 1988 put it: “The arrival of [Lalo] coincided with several consecutive wins at the start of the league championship. Lalo Maradona, after his presentation, became an idol of the local fans.”

Yet the friendly proved a turning point. “From there,” continued the report, “a maleficent luck surrounded Granada, who went on to lose nine straight games. The fans that came in the first games stopped showing up to Los Carmenes and Lalo lost his place in the team.”

Despite the protestations of some fans, he would not get it back. “Lalo is a player of good technique but little effort,” El Pais explained. Him being dropped did not seem to make much difference though. Granada, having made a fair bit of noise, went straight back into the third tier at the end of the campaign.

Lalo moved on, playing for various clubs in Argentina, Venezuela, Japan and Canada, but never managed to make an impression at any decent level. Hugo, meanwhile, was slightly more accomplished. He spent two seasons at Rayo Vallecano before carving out a solid career for himself in Japan’s J1 League in the mid-90s.

Though they never reached anything like Diego’s level – and Lalo was, it’s fair to say, very much not “the best of the three” – Hugo and Raul will at least be able to recall playing alongside their illustrious brother in that game.

As Hugo said after Diego passed away late last year: “On the pitch my brother performed miracles. He was a Martian.” On that November night at a packed stadium in Andalusia, it must have seemed very much like the spectacle in front of the fans had arrived from outer space.