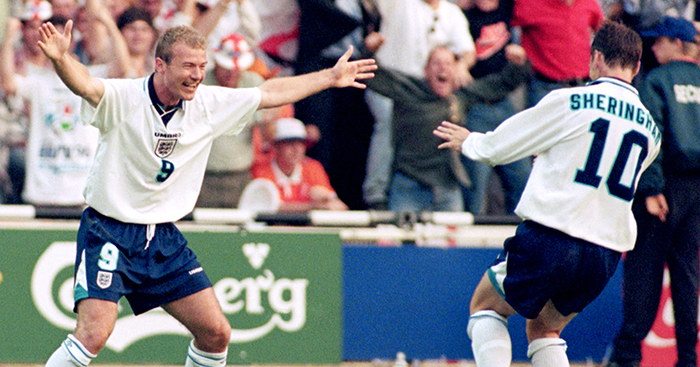 England didn’t exactly have the nation united in belief when they began their European Championship campaign in 1996 – but by the time they beat the Netherlands in the third game, the mood had changed significantly.

England’s players earned the wrath of the media in the build-up to the tournament following a boozy trip to Hong Kong, and when they were held to a 1-1 draw by Switzerland in their opening game, the mood was downbeat to say the least.

The second game bought a 2-0 win over Scotland which is remembered fondly for Paul Gascoigne’s brilliant goal and dentist chair celebration, but the performance at the time certainly hadn’t been enough to get everyone behind them – it was not until the second half that Alan Shearer opened the scoring, and David Seaman had saved a penalty from Gary McAllister just moments before Gazza’s clincher.

Still, the win had left England top of Group A and needing only a point in their third and final group game against the Netherlands to progress to the quarter-finals.

Thanks to ITV, who have been showing all of England’s games from Euro 96 during lockdown, we can look back at the mood going into, during and after a game which suddenly had everyone believing 30 years of hurt was about to come to an end.

Host Bob Wilson was joined in the studio by Jack Charlton and John Barnes, and the two former England internationals had very different views on how the game would play out.

With the Dutch also needing only a point to guarantee progression, Barnes, resplendent in a white jacket, predicted a “very entertaining, open, attacking” game, but Charlton was rather less optimistic.

Asked by Wilson if he too expected an open game, Charlton replied: “Don’t think so. I think both managers will have told their team to keep their shape, don’t overcommit, leave a player up front and if you get chance of a break, okay, one of you do it, but I don’t think any team are going to go charging off each other.

“Alan Shearer will have to battle hard, and I don’t think we’ll see much.”

'There are so many good technical players on the pitch, I'd be disappointed if it wasn't a good game'@England manager ahead of his side's clash with the Dutch

Paul Ince brilliantly won a penalty which was converted by Shearer to give England the lead before half-time, but Charlton was more focused on a poor performance from the Netherlands.

Set up by Wilson, who described it as an “excellent team display” from England, Charlton said: “It’s been good. I’ve been a little bit surprised by the lack of picking up positions early by the Dutch in midfield. They just don’t seem to be on top of it today. And they seem to be having trouble getting someone else up to support Bergkamp.”

Prompted by Wilson for some words about the Three Lions, there was praise for Ince, but Charlton quickly reverted to a grumpier tone, warning of Bergkamp’s “tremendous pace”, which just sounds weird now. “Anything over the top and he’s turned and gone. You’ll never catch him,” Charlton said.

Barnes declared himself unconcerned by Ince’s booking which would rule him out of the quarter-final, pointing out that Jamie Redknapp could step in or Terry Venables could switch to a back three. “It’s a good squad, we’ve got enough players to cover for that,” Barnes said.

Shearer slots home from the spot after Ince is felled by Danny Blind!

He wouldn’t have been alone, but Charlton certainly wasn’t expecting what followed from England in the second half, with a superb Shearer goal sandwiched by two from Teddy Sheringham to put the Three Lions 4-0 up and get Wembley absolutely rocking.

A young Patrick Kluivert stepped off the bench to pull one back for the Netherlands and send them narrowly through to the quarters at Scotland’s expense, and even Charlton was in optimistic mood in the studio at the end.

“It truly stunned everyone in the ground, and it stunned us as well up here,” he said. “They did great. They got the two goals then they played on the break.

“They worked very hard across the midfield. They didn’t give the Dutch time to settle and see what they wanted to do, that’s the way you have to do it, and punish them.”

What a team move and what a performance at @wembleystadium! 🙌

Where does the win against the Netherlands at EURO ‘96 rank among your favourite #ThreeLions games?#Euro96Relived pic.twitter.com/P3tPGS9t0F

Told by Wilson that England were now 4/1 second favourites behind Germany to win the tournament, Charlton really started to get giddy.

“I backed England at 7-1. The Germans are still favourites, but wouldn’t it be wonderful if we got an England Germany final again?

“The midfield came out and competed with people. They didn’t do that against the Swiss in the second half and got punished for it, but Terry’s put it right and it’s tremendous. That was a great performance.”

Barnes, meanwhile, was slightly more cautious when asked if England could win it: “Of course they can, but there are a lot of good teams in the European Championships.

“Odds mean nothing. You’ve got four or five teams who I’d consider equal favourites to win it. But they can go all the way.”

Not a bad strike partnership!

Trying to think of a catchy name for this England strikeforce… 🤔

Shearer and Sheringham, praised as you’d expect following their braces, were both interviewed, while Venables said the performance was the best he had overseen as manager.

“I would agree with that because we were under a lot of pressure from the press,” Barnes said. “To score four goals against Holland at any time, much less in a European Championship, is excellent and it was a wonderful performance.”

Shearer directed a few barbs at the media following their criticisms of the team’s preparation  Charlton said he was “completely justified”, adding: “I’d like to see how some of the newspapers will get out of what they’ve said and whether they’ll change their mind again because they’ll all be heroes again tomorrow.

“After what the lads have gone through, this is the greatest answer they could have given.”

Charlton described the performance as “absolutely wonderful” and the crowd as “absolutely splendid”, with Barnes declaring himself “stunned” by what he had witnessed.

“I’ve never seen an England team, not necessarily the goals they’ve scored, but the way they’ve played, with the ball and without the ball. Holland are pass masters, but they just couldn’t get their passing movements going.

“Harried them in midfield, condensed the game in midfield so Holland couldn’t play through the midfield.”

Barnes also predicted that “possibly the press are going to go overboard tomorrow and say we’re going to win the European Championships”, urging the players to keep their feet on the ground.

But this was a time to go overboard. We didn’t win it, of course, but briefly, just briefly, we thought we might.