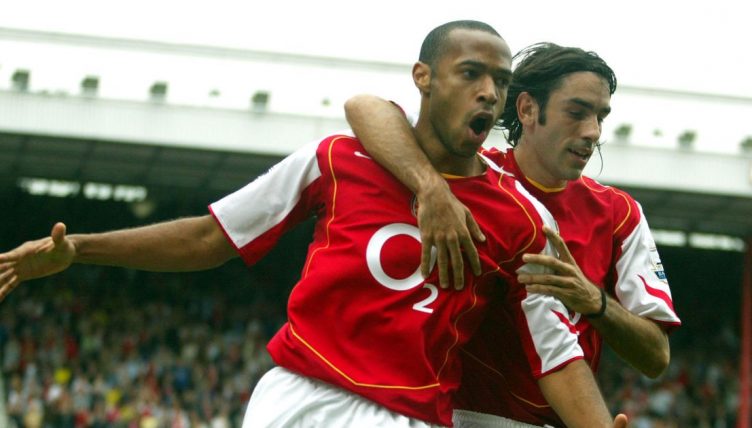 When you think of Thierry Henry at Arsenal, there are a few goals that are likely to spring straight to mind. Well, it’s time to remind yourself of another absolute beauty you’d forgotten all about.

The flick and volley on the turn against Fabian Barthez, the piss-taking solo goal against Spurs, the backheel against Charlton, that one against West Ham when he flicked it up, spun, kneed it down and smashed it into the top corner. The list goes on.

Indeed, all of the above made it into Arsenal’s YouTube compilation of ‘Thierry Henry’s best goals’, along with a few other worldies for good measure.

Yet there is one Henry goal which nobody seems to talk about. A goal which would be most players’ goal of a lifetime yet which was scored so easily by Henry that everybody seems to have forgotten how bloody brilliant it was.

It came in a 5-1 win at Manchester City towards the end of February 2003 which took Arsenal five points clear of nearest challengers Manchester United with 10 games left to play.

This was an Arsenal side which had won the Double in the previous season and would go Invincible in the next. And this was their 17th game unbeaten.

Yet somehow, inexplicably, they did not retain the title this season, following up this win at City with another at home to Charlton before winning only two of their next seven to open the door for United to win back the league.

But make no mistake about it, this was a remarkable Arsenal team. Maybe that’s why this goal seems to have been forgotten about. This kind of thing was just too common back then.

Or maybe it’s because it was their third on the day, scored after just 15 minutes and just four minutes before they scored again to go four-up inside 20 minutes. They were applauded off by the City fans at half-time that day; maybe their performance was just so good that our brains have wiped it from our memories, dismissing it as a dream which couldn’t have possibly happened in reality.

But it did. Arsenal really were that good. And though Henry celebrated scoring it as casually as most people would a tap-in, his goal that day is so beautiful we’ve been watching it on loop ever since we saw it again to make sure our stupid brains never dare to forget it again.

It begins with a long, long pass out of the back from Martin Keown, perhaps another reason why everybody’s forgotten about it, but Henry immediately turns it into something beautiful, bringing the ball down with the outside of his right boot without breaking stride.

He’d peeled off the back of the defence to latch onto the pass 20 yards out with only one City player for company, but as easy as he makes it look, that first touch should not be dismissed. The ball, which had come from deep inside Arsenal’s half remember, was coming high over his shoulder, which every ex-pro-turned-pundit tells us is the hardest ball in football to control.

And very, very few players would have controlled a ball coming over their head from the right with their right foot. It even sounds awkward. But it’s exactly the touch that’s required in the situation – at least when you’re on Henry’s plane – to set up the ball to be volleyed in after the bounce with the very next touch.

Every good striker knows to shoot before the keeper has set himself, but Carlo Nash still hadn’t worked out how Henry had even got into the position to shoot, let alone score. As the ball hits the back of the net, just inside the far post, Nash’s mind is probably telling him, “right, get ready, there might be danger in a few seconds here.”

Normally we’d rue the fact he didn’t dive as taking some of the aesthetic gloss off the goal, but in this case it fits perfectly. Henry was operating on a completely different level to everyone else so of course Carlo Nash didn’t have time to react. Don’t feel bad about it, Carlo, at least nobody remembers it.

There was a beauty about Arsenal’s first goal on the day, too, slotted home by Dennis Bergkamp after a slide-rule pass between a whole host of City defenders which instinct says should have been cut out but nostalgia wants us to believe was so perfect that it simply wasn’t possible to stop.

And the second, finished by Robert Pires but created by Henry, provided the context for the third. This was him reminding the City team that he is in a different class, that anything he decided he wanted to do, he would do.

It begins with him intercepting a loose pass out of the City defence around 30 yards from goal, out towards the left flank, an area which does not usually scream immediate danger.

But this was Henry. His first touch might have been dismissed as heavy under normal circumstances, but to reiterate, this was Henry. It was, in fact, the perfect touch to get him into a position to isolate Richard Dunne in a one-on-one.

And as good a defender as Dunne was on his day, let’s face it, there was only ever going to be one winner here. Henry merely drops a shoulder, knocks it past him and darts into the box to cut back for Pires to finish.

As with the goal he scored himself, Henry made it look so easy that you have to remind yourself that both of these teams were playing in the Premier League. Indeed, Jon Champion, commenting, says “it’s hard to believe we’re watching a Premiership football match.”

“Manchester City are defending like a pub team,” he says, and there’s a bit of that, sure – they were managed by Kevin Keegan, after all – but just imagine trying to play against this Arsenal team. Loose passes in this position aren’t usually immediately punished with a goal. City weren’t the outlier, Arsenal were.

As for Henry, well, he was so good he scored too many amazing goals to us remember.