Alvaro Recoba may not have ended his career with the extensive honours list we all expected when he burst on to the scene with Inter, but when he provided so many extraordinary moments, who cares?

As we keep reminding you here on Planet Football, the 1990s and early 2000s was a wonderful era for football, a renaissance period full of players whose only aim seemed to be to entertain.

Alvaro Recoba probably isn’t the first player that comes to mind, but his talent is worthy of celebration nonetheless. His career may have fallen short of expectations, but it was still a fantastic career full of memorable moments.

Left-footed, it would be too obvious, too clichéd to say Recoba had a wand of a left foot. He was blessed with something much more powerful.

His left foot can only be likened to a Green Lantern ring, which, in case you were wondering, is a fictional ring capable of creating seemingly impossible things with the power of one’s mind.

He was an incredible dribbler, often segueing into different areas of the pitch with the ball glued to his feet, an expert set-piece taker, and occasionally risked uprooting goal frames such was the power of his shots.

His only restriction was a somewhat lazy approach to the game, but in some way that only added to his appeal. 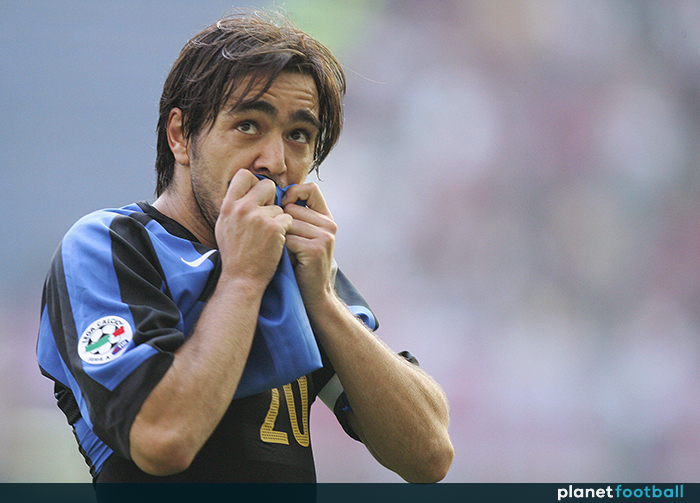 Recoba started his career in Montevideo with Danubio, where he made his debut as a 17-year-old and scored 11 goals in 34 league games before earning a move to one of Uruguay’s big two, Nacional, aged 19.

Nacional’s standing in the Uruguayan Primera Division meant Recoba would have to raise his game further, and that is exactly what he did, scoring 17 in 33 before being provided with the platform to take the football world by storm.

The tales of his left foot quickly travelled beyond the shores of South America, and in 1997 he signed for Internazionale in the same summer as Ronaldo – O Fenomeno.

As with any signing from South America, there was some vagueness surrounding what Recoba had to offer. After all, the leap from Nacional to Inter Milan was a big one and it was more than likely he’d need time to adjust.

But that vagueness disappeared quicker than anybody would have expected as El Chino announced himself to the European game in stunning style on his Nerazzurri debut against Brescia.

Ronaldo had failed to make an instant impact on his own debut, impressing but hitting the crossbar with a free-kick and seeing a goal ruled out for offside, and heading into the closing stages Inter fell behind.

Recoba, the unproven player he was at the time, had started on the bench but been brought on by Luigi Simoni just before that goal to play the final 18 minutes. And it was Recoba, rather than Ronaldo, who turned the game on its head.

First, with 10 minutes remaining, he received a short pass from Benoit Cauet before immediately launching the ball into the back of the net from 30 yards out with a ridiculously pure strike.

He wasn’t closed down in a hurry, but the Brescia defenders can hardly be blamed for not realising he was capable of that. Well, they knew now.

Five minutes later, Inter were awarded a free-kick from 35 yards out, and this time Recoba was called up to take it. Having already bagged one goal from long range, here was a chance for him to prove just what an extraordinary footballer he was.

And prove it he did, powerfully curling a free-kick into the top corner on the goalkeeper’s side, thus earning his side maximum points.

Massimo Moratti had been convinced to sign Recoba after a solo goal he scored for Nacional that was compared to Diego Maradona’s second against England in 1986.

Now with two on his debut – and guaranteed goals from Ronaldo – it seemed certain Inter were set to dominate.

However, while Ronaldo did indeed score 34 goals for Inter that season, Recoba scored only one more in Serie A, on January 25, when he was called from the bench to save Inter from a 1-0 defeat to Empoli.

By now he was made out to be just another young player struggling to adapt to the rigours of European football.

Inter finished the season behind Juventus in controversial fashion, but Recoba’s influence was minimal, and early the following season he was shipped out on loan to relegation-threatened Venezia in search of more first-team football.

Inter struggled, finishing in eighth and going through three managers, but Recoba shone out of the spotlight, helping Venezia avoid relegation with 11 goals and nine assists in 19 appearances en route to an 11th-placed finish.

It didn’t go unnoticed back at Inter, as he made 27 appearances under Marcello Lippi in 1999-2000, scoring 10 goals in Serie A to help the Nerazzurri improve to finish fourth, but further turmoil and upheaval followed as first Lippi and then Marco Tardelli were sacked by Moratti.

Still, despite Inter’s struggles and Recoba’s own inconsistency, in January 2001 he was awarded a new five-year contract that was said to have made him the world’s highest-paid player.

The contract was obviously meant to be a symbol of Moratti’s faith in Recoba’s ability that would spur him to raise his performance levels, but in June 2001, El Chino was banned for a year by the Italian FF for carrying a fake passport to get around the Serie A’s limit on foreign players.

The ban was later reduced to four months after an appeal, with Recoba returning in December to score six goals in 18 appearances as Inter finished third, but it was yet another bump in the road for a player struggling to justify the hype.

In 2002-03, however, Recoba enjoyed arguably the finest season of his Inter career. Hernan Crespo had been bought in to replace Ronaldo and partner Christian Vieri, and the three players were instrumental in the run to the semi-finals of the Champions League.

Crespo scored nine goals, with Recoba contributing three – the same as Vieiri – and laying on several more, both in Europe and domestically, where Inter again finished second to Juve. At times that season, he was unplayable.

He missed much of the following season through injury, making only 18 appearances in Serie A, but he still contributed eight goals, including the winner in one of the most remarkable turnarounds in recent memory.

With Inter 2-0 down at home to Sampdoria into the final 10 minutes, then-boss Roberto Mancini introduced El Chino in the hope he could produce some magic with that special left foot of his – and he did exactly that. From the moment he was introduced, the game changed. The comeback began.

First he set up Obafemi Martins to reduce the deficit and then, after Vieri had drawn things level, Recoba sent the ball flying into the back of the net with that Green Lantern ring of a left foot to complete the comeback.

Yet again, just as you began to doubt him, Recoba served a reminder of his unbelievable ability to change a game.

Starting off the #InterSampdoria thread with a goal from Alvaro Recoba that helped Inter beat Sampdoria 3-2, this game is labelled as one of the best comebacks in history and for me defines the term Pazza Inter, hopefully we won't have this stress on Sunday. pic.twitter.com/pNXRJGddJI

Sadly, it was not the beginning of a great revival but more the beginning of the end as Recoba’s appearances dwindled over the next few seasons to the point of him joining Torino on loan for the 2007-08 season, which proved to be his last in Italy.

He moved to Greek club Panionios in 2008 for two years before going back to where it all began, Danubio, in 2010, and then returning to Nacional, where he spent four years before calling time on his career.

He may not have become the legend his talent implied he would, but with 53 goals in 175 league appearances for Inter, coupled with unforgettable moments of magic, Recoba won’t be forgotten in a hurry. He was a source a joy, inspiration and awe, and for that, despite all his flaws, he is fondly remembered not just by the Inter faithful but by anyone who saw him at his best.

As Moratti said: “He is not just a simple football player. He is football. He did things that normal players don’t do.”