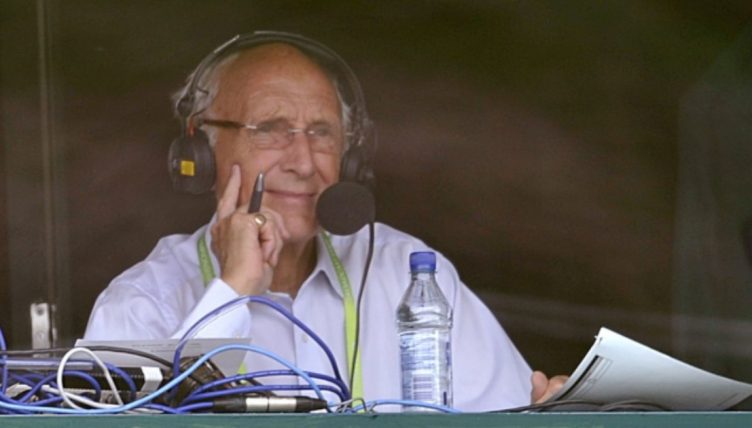 The Beautiful Game has been lit up by some extraordinary rivalries over the years: England versus Germany, Real Madrid versus Barcelona, and Richard Keys versus the accepted boundaries of good taste.

In the BBC commentary box, we were treated to a titanic battle between John Motson and Barry Davies. Motson was all hustle and bustle, a statistics machine with boundless energy. In contrast, Davies opted for poeticism at key moments. Listening to him in his pomp was extraordinary.

At times you’d forget he was there. Unlike many of his cohorts, he wasn’t afraid to let the drama unfold on screen and say something only when absolutely necessary, which feels like a dagger through the heart of Jonathan Pearce’s raison d’etre.

Choosing your favourite Davies moment is like choosing between your favourite chocolate bars. I was too young for “look at his face”, and so emotionally immature that memories of “Brolin-Dahlin-Brolin” bring back the inescapable pain of England being rubbish at Euro 92.

Below are four instances which I’ll forever associate with one of the sport’s most iconic voices. Four instances when, you have to say, that was magnificent.

A year after the heroics of Italia 90, England was firmly in the grip of Gazzamania.

While the Spurs midfielder was busy writing new chapters in English football, Tottenham were in the midst of a familiar story. Crap one week, great the next, which sounds like a Chas n’ Dave anthem for the majority of the 90s at White Hart Lane.

By April 1991 Terry Venables’ side had successfully Spurs-ed their way through a season that featured occasional moments of glory alongside frequent moments of ineptitude.

Only the FA Cup offered escape from another dismal league campaign. And even then, 10 of their starting XI seemed to be doing their best to exit the competition early.

Gascoigne was on a one-man mission to drag his team to Wembley. His heroics against Portsmouth and Notts County saved his side from an embarrassing exit and secured a semi-final berth against Arsenal.

The game felt like destiny and with only five minutes on the clock, Gascoigne stood over a free-kick. Davies, with the intuition of a man who’d seen the generation’s finest sportsmen deliver in moments like these, could sense it.

“Is Gascoigne going to have a crack? He is, you know. OH I SAY! BRILLIANT! That is Schoolboys’ Own stuff. I bet even he can’t believe it. Is there anything left from this man to surprise us? That was one of the finest free-kicks this stadium has ever seen.”

It’s a line that still sends shivers down the spine of those who witnessed it live.

As a young Gazza celebrated wildly with his adoring public, “Schoolboys’ Own stuff” felt like a the perfect description of the fairytale unfolding before our eyes: a boy living a dream, a boy living life to the fullest and a boy unaware that, in some respects, life might never be this good again.

To those of us who sat in front of the telly on April 8, 1990, it will forever be known The Greatest Day of Football Ever Seen. Two semi-finals live on the BBC, 13 goals, three hours of absolutely breathless action and Des Lynam to help us make sense of it all.

It had started with Crystal Palace shocking Liverpool 4-3 at Villa Park. Then after a quick break for beans on toast and a can of Tizer, it was off to Maine Road where Manchester United hosted Second Division Oldham.

United had spent a lot of money on players with big reputations – and got very little in return. Alex Ferguson’s job was about as secure as a Florida gazebo in hurricane season. And he knew it. His bum couldn’t squeak any louder if he sat on Joe Pasquale. The Oldham game was a must-win.

Any concerns Davies had that his allotted fixture wouldn’t live up to the early game were erased immediately as both teams went at each other from the off. It was a chaotic, error-strewn, glorious mess of a game on a Maine Road surface bobblier than your nan’s Christmas jumper.

With the scores locked at 2-2, a defence splitting pass from United’s Brian McClair set Danny Wallace racing after the ball like a bulldog chasing a sausage roll.

“Nicked away by McClair. Useful for Wallace. A test of his pace, now a test of his finiiiish… and he’s equal to both.”

Once again, in the midst of utter carnage, Davies had found the perfect words for the perfect moment.

In the second semi #MUFC and #OAFC share six goals at Maine Road.

Danny Wallace puts United ahead (with some iconic commentary from Barry Davies). Then Roger Palmer makes himself a hero.

It’s hard to find the words to describe Argentina’s 1990 World Cup side. The traditional term would be that they were a team “in transition”. If that’s a polite way of saying they were a bunch of over-the-hill shithouses who arseholed their way magnificently to the semi-finals, then I’m inclined to agree.

Four years is a long time in football. In 1986 Diego Maradona had the world at his feet. Even God – with a helping hand from Peter Shilton’s concrete boots – was on his side. One tournament cycle later and the closest he got to heaven was when he was high as a kite after a night on the marching powder.

Shorn of their talisman’s talents, Carlos Bilardo had no choice but to mask his team’s weaknesses. He did it by disguising his World Cup holders as a team of gritty, hard-to-beat bastards who fought, scratched and clawed their way through 90 minutes of sheer hell for the footballing purists.

There was no finer example than the knockout game against arch-rivals Brazil. The Argentines were battered from pillar to post. Alemao, Careca and Muller ran them arse-ragged and only Sergio Goycoechea’s brilliance in goal kept the scores level.

Then with 10 minutes to go, Maradona made his only creative contribution of the game. Drifting past one man, then another, that peripheral vision of old returned for a split-second – and it was enough to win it.

“This is Maradona. And he gets the ball through to Caniggiaaaaaaaaaa… SCORES! Taffarel looks at the ground. The little man has set up Argentina yet again.”

My favourite commentary ever:

Claudio Caniggia, Brazil and the brilliance of Diego Maradona.

On a sweltering night in Marseille, Argentina and Holland engaged in a titanic quarter-final that produced one of the finest goals in World Cup history.

The teams were like two prizefighters who abandoned all sense of gameplan as soon as the bell rang. With 10 minutes to go, they’d traded goals and red cards as the game reached an epic boiling point.

While all around were losing their heads, the Iceman lived up to his reputation. A footballer’s energy is his currency. And Bergkamp conserved his with the sort of vice-like grip that Tory ministers reserve for welfare spending.

As others wilted in the fiery French heat, the Dutchman waited for his moment. And it came with minutes to go.

Frank De Boer sent a raking diagonal ball forward towards Bergkamp, who had found space between two markers. His first touch was softer than a peck on your mum’s cheek, the second sent Roberto Ayala out for a baguette and a packet of Gitanes, and the third curled the ball exquisitely past Carlos Roa.

Without the commentary, it’s a magnificent finish. With Davies’ words to accompany it, it’s some of football’s most compelling theatre. Absolutely wonderful stuff.

“Beautifully pulled down by Bergkamp. OH WHAT A GOAL! Dennis Bergkamp has won it for Holland! That was absolutely brilliant! From adversity to triumph for the Dutch. They who were silent are now in song.”

Sid has teamed up with Quickly Kevin host Chris Scull to author Can We Not Knock It? A Celebration of 90s Football. From Ceefax to Subbuteo. From Des Lynam to Diana Ross’s penalty technique. It’s a tribute to the niche and the nonsense of the 90s. If you liked this article, you’ll love the book, which you can pre-order here.

‘Shouldn’t you be at work?’ Five times Des Lynam was just wonderful

The joy of Ceefax: Remembering three of the greatest things about p302