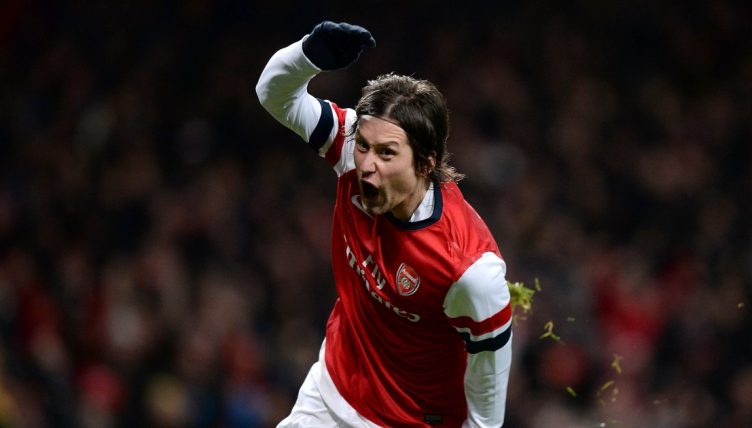 Some of football’s finest moments were, when stripped of context, terrible ideas.

Steven Gerrard, for example, should not have had the energy to shoot from distance against West Ham in the 2006 FA Cup final, let alone chosen to attempt such a thing.

Then there’s Ricardo Quaresma, who should have shot with his left foot after cutting inside during Portugal’s victory over Belgium the following year, or at the very least opted to lay the ball off with his right

And when the ball dropped for Tomas Rosicky on the corner of the Tottenham penalty area, less than two minutes into a North London Derby at White Hart Lane in 2014, the smart money would have been on taking a touch.

However, in each of these situations, the player involved was gripped by something which overrides all logic: unshakeable self-belief.

Priorities change, and what one should do is not the same as what he should do in these circumstances.

This is how Gerrard stunned Shaka Hislop, how Quaresma introduced international football to the trivela, and how Rosicky pulled off something like this as if it was the easiest thing in the world.

The thing about Rosicky is he had no real right to be so certain of himself.

He had scored just five goals in the calendar year leading up to the game, and repeated injury struggles might have left others wracked with self-doubt. At the very least it might have had them easing into the game, but that was never the Czech midfielder’s style.

He lived up to his nickname of ‘Little Mozart’ by setting the tempo and forcing others to play to his rhythm, and this was just as true in a minor cup game as in a fiercely contested derby against Arsenal’s biggest rivals.

There was a single-mindedness almost before the ball arrived in Rosicky’s path; a movement borne of the knowledge of how the ball would sit up and how it would move thereafter.

His strides are elongated in a manner that almost invites the ball to join his boot, rather than the other way around, and yet the power on the strike is of the type you’d usually associate with a player approaching the chance at full-throttle.

If it felt like he could see into the future, though, that may be because he relied on the past repeating itself. This was a game against Tottenham, and that’s where he would always shine.

While the 2014 goal cemented the distance between the North London clubs, the goal from Rosicky two years prior was enough to stave off any threat of a gap opening in the other direction.

Here, again, it involves movement which looks fine if unremarkable at first glance, but then you take a closer look and realise the level of precision needed.

Rather than simply exchange passes with Bacary Sagna and tap home, Rosicky has to find a gap between Ledley King and Brad Friedel which only exists at the split second he arrives.

There’s no cosmetic break in his stride, the move from jog to strain a near-imperceptible one – even the slight jump as he runs through after poking home is designed so intricately you barely notice it. 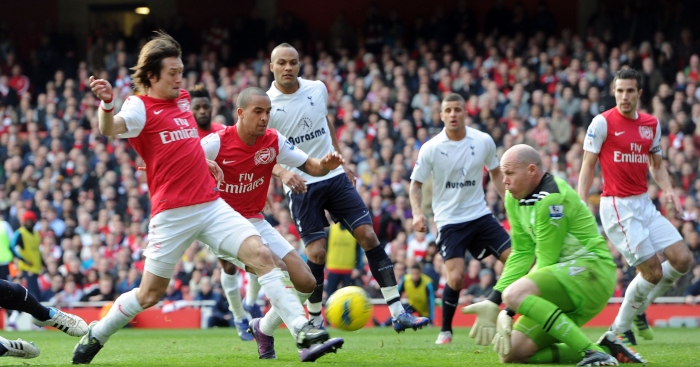 Your best-laid plans look even better when the outline is invisible, and an on-song Rosicky played like he was carrying off a heist by dyeing the blueprints onto his eyelashes and squinting.

Even in this scenario, Arsenal did not make off with the entire loot immediately – the goal helped pave the way for a 5-2 win in a game which Spurs led by two clear goals, but the job was only completed on the final day of the campaign when the Gunners denied Spurs third place and – following Chelsea’s Champions League triumph – a place at Europe’s top table.

By the time it was all taken care of, the evidence had long been buried and any suspicion of trickery a distant memory.

It remains bittersweet, however, that Rosicky’s later career was characterised by his tendency to pop up in the biggest of domestic occasions, be it in the North London Derby or in the midfielder’s provision of a helping hand in another comeback victory just up the road in the 2014 FA Cup final.

When he moved to England it was hoped that he would provide a whole lot more, due in no small part to a goal he scored after signing for Arsenal but before stepping onto the brand new Emirates Stadium pitch for the first time.

The 2006 World Cup looked like being the tournament where Czech legend Pavel Nedved would pass the torch to the next generation. But instead of waiting for it to be passed down to him, Rosicky swept his open palm through the flames before balancing it on his head for 90 minutes.

His goal against the United States in the opening game was another which owed itself to knowing both what he had to do and how long he had to do it.

It might look as though the swerve of the ball takes it beyond Kasey Keller’s grasp, but the real achievement comes from how little it swerves; how the very moment it begins to move in the air is the moment the keeper has already conceded defeat.

In a World Cup of great goals, this was undoubtedly one of the finest on show.

Tomas Rosicky’s career might have produced a good number of highlights, many of them at huge moments for club or country, but there’s always been a sense there could have been more.

He averaged fewer than 25 games per season during his decade at Arsenal, featuring in more than half of the club’s Premier League games in just five of his 10 campaigns, and we can only wonder what he would have been capable of without the repeated setbacks.