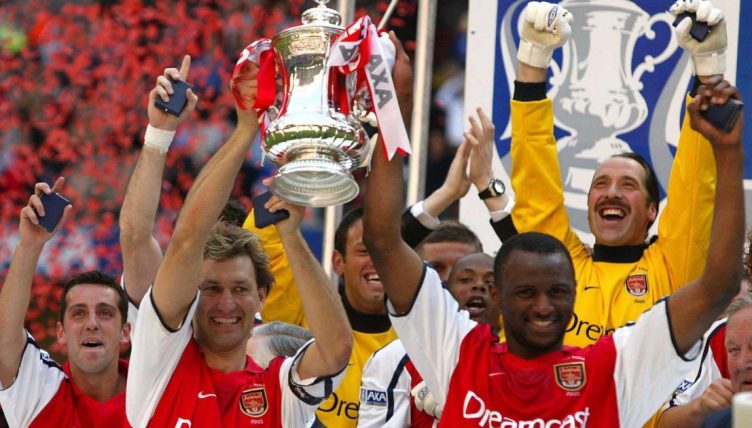 On May 8, 2002, Arsenal won 1-0 at Manchester United to add the Premier League title to the FA Cup they had won four days previously. It was their second double in five years.

When it comes to ranking Arsene Wenger’s best-ever Arsenal teams, the Invincibles of 2003-04 are in a league of their own.

To go a full Premier League season unbeaten was a simply incredible achievement which may never be done again in our lifetimes. And to win the title at Tottenham…well, that’s something no Arsenal fan will ever forget.

The 1997-98 side that won the double in Wenger’s first full campaign in charge is revered almost as much, but what about the other double-winning team of 2001-02?

If only to remember Kanu’s jump over Sylvain Wiltord, that season deserves greater celebration.

That, of course, came after Wiltord’s goal at Old Trafford to secure the title. It can’t quite compare to doing it at White Hart Lane, but it’s not a bad second best.

Look at him winning the league for Arsenal at Old Trafford.

Look at Kanu jumping over his head. pic.twitter.com/AYs3zIwDST

Four days prior to that, Arsenal had won the FA Cup with a 2-0 victory over Chelsea at Wembley, providing supporters with ammunition to mercilessly and justifiably rib Tim Lovejoy forever more: “It’s alright, it’s only Ray Parlour.”

That week in which the Gunners sealed the double was the culmination of what, looking back, was a transitional point in Wenger’s Arsenal.

Sylvinho had been sold to Celta Vigo in the summer amid talk of a dodgy passport, allowing Ashley Cole to establish himself as undisputed first choice at left-back, while Tony Adams and Lee Dixon were fazed out in their last seasons before retiring and being replaced in the team by Lauren and Sol Campbell, signed on a free transfer from Spurs.

Come February, Wenger completed what would go on to be the Invincibles’ defence when he signed Kolo Toure for just £150,000.

Though few people would have expected it at the time, least of all his new team-mates, as Ray Parlour later revealed in a hilarious anecdote about the Ivorian’s trial.

Wenger could never be accused of throwing the baby out with the bath water, but he handled the period of having to replace these club legends fantastically well.

David Seaman, Martin Keown and Ray Parlour were still going strong, while both Adams and Dixon still made plenty enough appearances to claim another league winners’ medal, but Wenger was well on his way to building his team.

That is certainly not to say that all of Wenger’s signings that season came off – others included Richard Wright and £10million “fox in the box” Francis Jeffers – but come May the Gunners had 87 points and two trophies. The odd bad signing didn’t seem too much of a disaster back then.

Eighty-seven points was only three less than they managed in 2003-04, courtesy of three defeats, all at Highbury. They went the full season unbeaten away from home in the league, scored in every game and finished the season with 13 consecutive wins, a run which has only been bettered this season by Chelsea.

Those are not necessarily the sort of records that immediately come to people’s minds, but there were plenty of moments during that season that undoubtedly will, not least Dennis Bergkamp’s amazing goal against Newcastle United.

There is little left to say about that goal that has not been said before, but that we all still talk about what was actually a very simple finish some 15 years on tells you everything you need to know about how wonderful Bergkamp’s touch and intelligence was to create himself the opportunity.

To him it was simple, pirouetting within a split second of his flick to leave nobody in any doubt as to whether he meant it, but the fact that nobody has pulled off anything as special since suggests it was a rather more remarkable piece of skill than the great man made it appear.

Part of what made the 2001-02 season special was how competitive it was at the top of the league.
Leeds United went the first 11 games unbeaten and topped the table in early November. Liverpool were three points clear at the summit with a game in hand come the start of December, but Newcastle United had taken over by Christmas. By February, Manchester United were in front, looking to make it four titles in a row.

Crucially, though, Arsenal were never far off the pace. After one early-season blip through October and November in which they took only three points from four games, the Gunners never went more than two games without a win.

They responded to that four-game winless run with a 3-1 victory over Manchester United memorable for Freddie Ljungberg’s lob and two Fabian Barthez howlers which gifted Thierry Henry a brace.

Four games later they suffered their third defeat of the season, at home to Newcastle, but it proved to be their last.

Their next two games brought a 2-1 win with 10 men at Liverpool, their first at Anfield under Wenger, and a Boxing Day victory over Chelsea by the same scoreline at Highbury.

Stars of the season

By this point, Henry, Pires and Ljungberg were flying. The former finished the season with 24 goals in the Premier League and the Golden Boot, Pires recorded a league-high 15 assists and won the Football Writers’ Association Footballer of the Year award, while Ljungberg scored 12 times in just 25 games and claimed the official Barclaycard Premier League Player of the Season honour.

Alongside Campbell, who scored his first goal for the club in that win over Chelsea and was imperious throughout, no more so than on his return to White Hart Lane, they were the stars of the season.

So good was Pires, in fact, that when he took his turn to lift the Premier League trophy on the last day, his team-mates bowed down in front of him. He was world class that season.

But with Patrick Vieira in midfield, and Wiltord and Kanu as alternatives to Bergkamp alongside Henry, Wenger had quality not only in every starting position but on the bench too. It really was an incredible squad.

Still, it required a special effort to beat off the many competitors to the title. On February 2, Arsenal were still only third after a 1-1 draw against Southampton on February 2 – but that would prove to be the last time they dropped points all season.

In the final 13 games came a 2-0 win at title rivals Newcastle, forever remembered for the aforementioned Bergkamp goal, a 2-1 win over Tottenham in which Lauren, of all people, scored a late winning penalty, the win at Old Trafford to clinch the title, then a 4-3 win over Everton on the final day that saw Adams lift the title in front of the home fans as he bowed out alongside Dixon.

READ NEXT: Robert Pires & the final touch of class which made Arsenal invincible