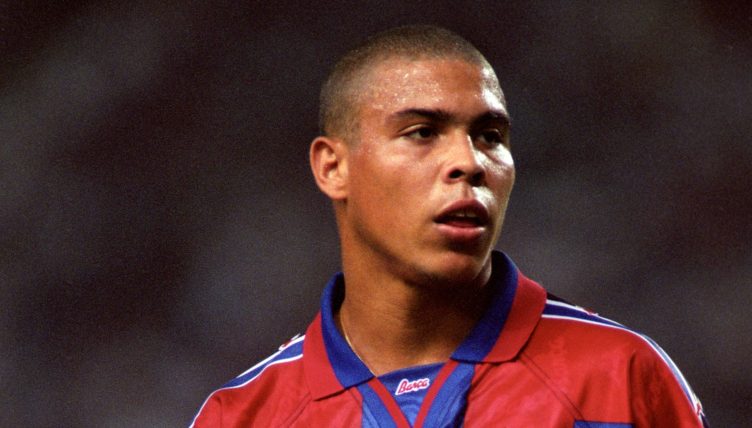 Ronaldo only spent one season at Barcelona, but it was arguably the greatest of his career.

When we think of fame, there’s one thing that rarely crosses our mind: imagine being so high up, so unmatchable, that you’re known worldwide by a mononym. And then imagine, less than two decades on, that mononym being inherited by someone else when you shouldn’t even be done yet.

There’s no denying Cristiano Ronaldo has risen high enough for us not to need his forename, but when the moment came – not long after trading Manchester United for Real Madrid – his namesake will have preferred not to already be spoken of in the past tense.

When Cristiano moved to Madrid, Ronaldo Luis Nazario de Lima was still a couple of months shy of his thirty-third birthday. Yet he had already been lessened in the public eye, becoming ‘Ronaldo Nazario’, ‘Original Ronaldo’ or the far less flattering ‘Fat Ronaldo’, depending on who you asked.

While some of his contemporaries were still kicking about in Europe’s top leagues (Ruud van Nistelrooy, two months his senior, was still a Real Madrid player), Ronaldo was having one last go at rebuilding an injury-hit career which delivered plenty but somehow promised even more.

It seems strange to say such a thing of a player who top-scored in a victorious World Cup run, scored a Champions League hat-trick at Old Trafford as a visiting player, won trophies with six clubs in four countries and picked up two Ballons d’Or five years apart.

That description paints a picture of longevity and reliability, of a player whose reputation during his career couldn’t possibly be diminished, even post-retirement. The truth is very different, largely due to how much of his success came at such a young age.

In fact, there is an argument that the Brazilian’s finest season came in the year he turned 20.

Plenty has been written about his hat-trick for Real Madrid against Manchester United in 2003, but another treble, all the way back in 1996, arguably gives more of a clue to why his younger self was so revered.

Ronaldo scored all three in Barcelona’s 3-2 victory over Valencia at Camp Nou that day, and he could easily have had six. And that isn’t a romantic reimagining of speculative efforts – it took some smart saves from the Valencia keeper and some uncharacteristically wayward finishing to keep the score down.

The greatest compliment you could give Ronaldo is that, when at his peak, opposition players had no part to play in most of his goals.

That is not to say they stood on watching idly as he went about his business; rather that there is nothing they could have done to stop him, and he took care of everything as if they weren’t even there.

If you look back at compilations of Ronaldo’s 34 goals in 37 La Liga games, at least nine more than any other player, yet somehow not enough to bring the title to Catalunya, one thing will stand out.

So many of the efforts – surely a disproportionate amount, unless we’ve collectively misremembered the 90s – end with the goalkeeper sat down. Not always rounded, but always on the ground.

It’s as if Ronaldo was willing to keep running until the keeper got smaller, in a kind of reverse rope-a-dope approach, before slotting home.

The other common factor comes in the witchcraft often displayed to shake off opposition defenders.

Ronaldo’s goal against Compostela a couple of weeks prior to his Valencia hat-trick is often singled out as his best for the club, besting an entire defence with drag-backs and close control in a goal not entirely dissimilar to the effort for Ajax which saw a certain Zlatan Ibrahimovic announce himself.

What makes the Valencia hat-trick so special, then, is that it doesn’t rely on the casual dominance of leaving the keeper grasping desperately at thin air as his legs betray him. Not that this isn’t a sign of brilliance of course, but the magic of this particular hat-trick is that it showed another facet to Ronaldo’s all-conquering ability.

When Nike released the R9 in the lead-up to the 1998 World Cup – the one that Ronaldo was supposed to win, rather than those in 1994 and 2002 in which he actually triumphed – they did so for a player capable of goals like the one against Compostela, and goals like the equaliser against Racing, where he left José María Ceballos helpless on the ground, but mostly for a player who could do all of this and more.

Remember when Ronaldo scored this brilliant hat-trick vs Valencia? pic.twitter.com/092g3YKWg6

The goals against Valencia weren’t like the others, but they showed why Ronaldo didn’t need any adjectives.

Watching the game back with a hazy memory, it’s easy to see the first goal and think you’ve misremembered the one you had in the back of your mind.

You knew he’d found a gap between two defenders, before opening up his body and coolly slotting the ball past Spanish number one Andoni Zubizarreta, but you thought the gap was smaller and the burst more devastating.

Well, the joke’s on you: he scored the same goal twice in the same game. Except the second version – which proved to be the winner – was twice as good.

Oh, and he had time in between them to look up at Gaizka Mendieta, chasing back at full pace, and just jog forward as if he wasn’t there before finishing calmly with his weaker foot. When he was in the zone, that’s just what he’d do.

But back to that third goal. It would have been easy for any striker to have retreated into his shell after missing chances to add to the lead and watching on as Valery Karpin completed the visitors’ comeback from 2-0 down.

Instead, it just made Ronaldo more determined to right those wrongs.

For the best players around, the best goals are the ones that wouldn’t even be chances for lesser lights. Goals like Lionel Messi’s famous solo effort against Getafe, or George Weah’s against Verona.

Valencia were no chumps, even back then. They had the nuts and bolts of the squads Hector Cuper would take within touching distance of Champions League glory, and would hold Barça to a 1-1 draw in the reverse fixture as well as beating Real Madrid at the Mestalla.

They’d been paying attention to that first goal, so (whether consciously or not) when Ronaldo picked the ball up 30-odd yards from their goal, Jorge Otero and Xabier Eskurza made sure there was no gap for the Brazilian to run through. No gap meant no repeat of the opener.

Or at least that should have been the case.

Extreme circumstances can allow a man to find a gap that isn’t there. It can happen in the closing stretch of a long-distance Olympic final, or with a commuter straining to fit through tube doors as they begin to shut.

Ronaldo found that bit extra, because back then Ronaldo could do whatever he wanted. The only thing preventing him from winning games all by himself was…well…himself. And he wasn’t going to get in his own way this time.

Ronaldo ended the season with 47 goals in all competitions, and Barcelona found the net 102 times in the league, but it wasn’t enough to deliver the title, or to keep Bobby Robson in his managerial role.

With the man who signed him moved upstairs, Ronaldo moved on to Inter for a world record fee and looked unstoppable before injury struck.

Barcelona, robbed of their talisman, turned to another Brazilian in the form of Deportivo La Coruna star Rivaldo. It would take a lot for the new man to live up to his predecessor’s achievements and seal his place among the club’s all-time greats.

Surely whatever he did, he wouldn’t be able to emulate Ronaldo’s stunning match-winning hat-trick in a 3-2 victory over Valencia. Wait, what? Oh, right.

READ MORE: 18 of the best quotes on Ronaldo: ‘The most complete striker there’ll ever be’