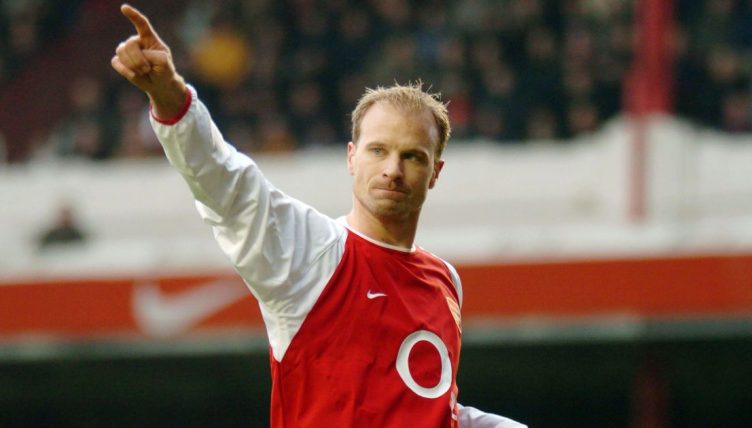 There are some footballers for whom statistics and even words just can’t do justice. Arsenal hero Dennis Bergkamp is definitely one of those players.

Football has become so driven by data that, at least within the media and by the general public, players are increasingly being judged on their tangible contributions. For a forward, that means goals and assists.

There are, of course, thankfully far more variables taken into consideration by those within the inner circle of football, but as supporters we must never allow ourselves to be too fixated by statistics. To do so would be to forget why we watch the game in the first place: to be entertained, to be inspired, to experience joy.

For that, we need artists. The footballing Da Vincis and Picassos so to speak. Players that mesmerise us. Players we’ll remember. Players we try to emulate on the pitch.

Dennis Bergkamp sits at the forefront of that genre. As a No.10 for most of his career, his statistics are mightily impressive, but they still don’t do him justice. They can’t describe his brilliance.

He set the bar for what it means to be a footballing artist. 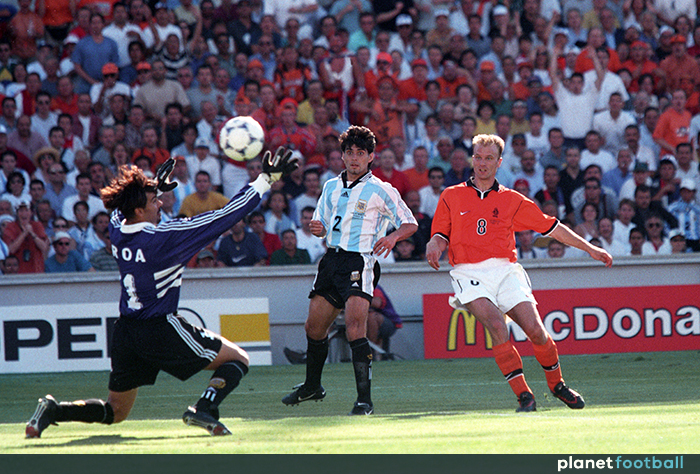 Growing up in the suburbs of Amsterdam, Bergkamp was once just another kid with a dream of one day becoming a professional footballer. He cites Glenn Hoddle as one of his biggest childhood inspirations, and he played with obsessive regularity in an effort to emulate him.

Just like Hoddle, Bergkamp worked hard to become known for his ball control, vision and ability to use either foot, but genius, of course, does not come through nuture. It was already inside of him.

By the age of 11, Ajax had already begun to take notice of Bergkamp with intent to recruit him for the academy, but his parents weren’t too keen on the idea of him joining a competitive football environment at the time.

A year later, however, in 1981, Ajax came calling again, and this time Bergkamp accepted the offer and took the first step to making his footballing dream a reality.

At the academy, there was an emphasis on enjoying the game amid a competitive environment, something which clearly resonated with Bergkamp and remained evident throughout his career. “I love playing football, being out on the pitch with a ball,” he said later in his career. That much was obvious.

He was clearly one of the better players in the academy and made his debut for the senior team in 1986, aged 17, when he was handed his professional debut by the legendary Johan Cruyff against Roda JC.

He scored his first goal a few months later and finished that season with 23 appearances, a Dutch Cup and UEFA Cup Winners’ Cup medal to his name. He was well on his way in his development into one of de Godenzonen’s most exceptional players.

He won the Eredivisie title in 1990 – Ajax’s first league title in five years –  and, by now playing up front as opposed to on the wing where he had first broken through, Bergkamp scored 25 goals in 33 league games in the 1990-91 season.

He added another 50 over the next two seasons before opting for a change of scenery at the end of the 1992-93 season.

Johan Cruyff was now in charge at Barcelona and made subtle attempts to convince Bergkamp to make a switch to the Blaugrana, but with Bergkamp’s sights solely set on Italy, he narrowed his options down to Juventus and Internazionale.

It was the latter who managed to lure Bergkamp to the San Siro with the promise of playing more attacking football, but it did not last during what turned out to be an incredibly frustrating season for him. He scored only eight league goals, though he bagged a further eight in Europe to help Inter lift the UEFA Cup. 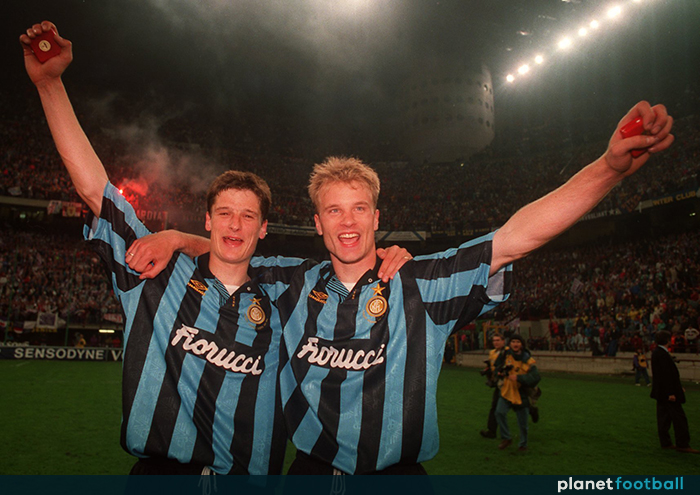 The Dutchman’s second season in Serie A, however, was far worse. The Italian media was against him, and he was weighed down by a general feeling of fatigue. He scored just five goals in 26 appearances that season.

By that time, it was clear that his relationship with Inter was not meant to be. When Massimo Moratti purchased the club in 1995, he sought an exit, and it was Arsenal that offered him a way out.

Signed by Bruce Rioch for around £7.5million, there were doubts over the signing – and they weren’t helped by Bergkamp’s career at Highbury beginning with a goal drought.

However, though Bergkamp’s time in Italy was detrimental to his football CV, it aided his mentality. He became more resilient and smarter on the pitch. He was unfazed by the early criticism from the English media and kept on playing his natural game knowing full well it was only a matter of time before he started scoring. 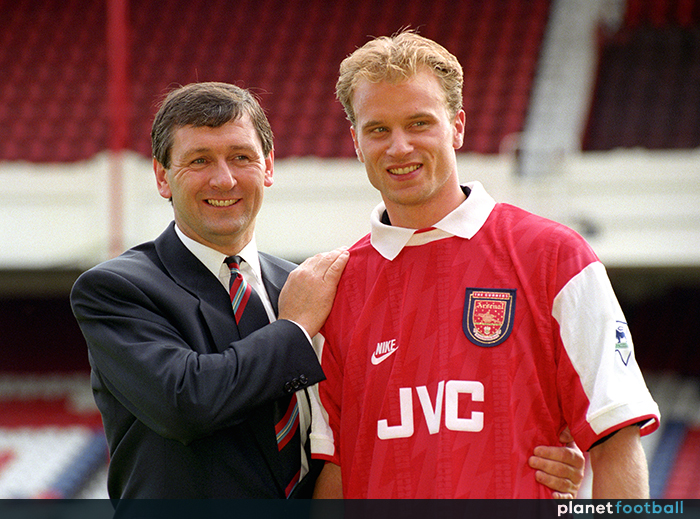 Seven games into his Arsenal career, Bergkamp finally found the back of the net against Southampton. He ended his first Premier League season with a decent tally of 11 goals in 33 appearances as the Gunners finished fifth.

It wasn’t until a young Arsene Wenger was brought in to replace Rioch after a few months of the following season that things really began to click for Arsenal and Bergkamp, but you have to wonder whether the Gunners would still have enjoyed the most successful period in their history were it not for that brave piece of transfer business by Rioch.

Either way, it was Wenger who saw the Picasso in Bergkamp. He recognised the ex-Ajax man had a special skillset, built his side around him and gave him a new purpose on the pitch as the man through which attacks would be built.

Bergkamp scored one more goal in three fewer league appearances that season, but, crucially, he also registered 13 assists as he became as accustomed to creating goals as scoring them.

He enjoyed the best goalscoring return of his Arsenal career in 1997-98 to help Wenger’s side win the double, scoring 16 in the league and 22 in total, including his first hat-trick for the club against Leicester.

His third goal was one of his most memorable of all time.

Allowing a lofted pass into the area to come over his shoulder, he controlled the ball with his right, moved it away from the defender with his left, took a third touch to set himself and then used his fourth to stick it past Kasey Keller into the top corner.

Along with his goals against Newcastle United and for the Netherlands against Argentina, it will forever be spoken about.

Bergkamp was named the PFA Player of the Year that season, becoming only the third non-British footballer to win the award.

Though his goalscoring dropped off after that, his contribution to the Arsenal cause certainly did not as he gradually built a partnership with Thierry Henry which will go down as one of the greatest of the Premier League era.

And in 2001-02 he helped Arsenal win the double for the second time under Wenger as they saw off Manchester United, Liverpool, Leeds United and Newcastle to win an incredibly competitive title race, with Henry, Robert Pires, Freddie Ljungberg and Bergkamp all playing particularly significant roles.

But one of the highlights of that epic season was the goal Bergkamp scored against Newcastle. It was a true masterpiece and still regarded as one of the best goals in Premier League history, 20 years on.

A sublime flick coupled with a lightning-quick pirouette after receiving a pass from Pires saw Bergkamp through on goal in the blink of an eye before he put the ball into the back of the net with a deft finish before anyone had time to process what had just happened.

The non-flying Dutchman had just created the footballing equivalent of the Mona Lisa.

Two seasons later, with Bergkamp still the fulcrum of Wenger’s side, Arsenal incredibly went the entire Premier League campaign without suffering defeat to win the title again – finishing 11 points ahead of Chelsea.

By now it was Henry that was leading by example as he bagged a whopping 30 goals in the league alone, but even at 34 Bergkamp still played a major role, contributing four goals and nine assists in 29 appearances.

The Gunners failed to retain the Premier League trophy the following season, finishing second, but Bergkamp enjoyed a more prolific campaign, bagging eight goals and 13 assists. For him to hit those figures aged 36 says a lot about his fitness levels but more importantly his speed of thought which made up for any lack of pace in his twilight years.

On the final day of the season, Arsenal thrashed Everton 7-0, a game in which Bergkamp bagged a hat-trick of assists and a goal that earned him the Man of the Match award. 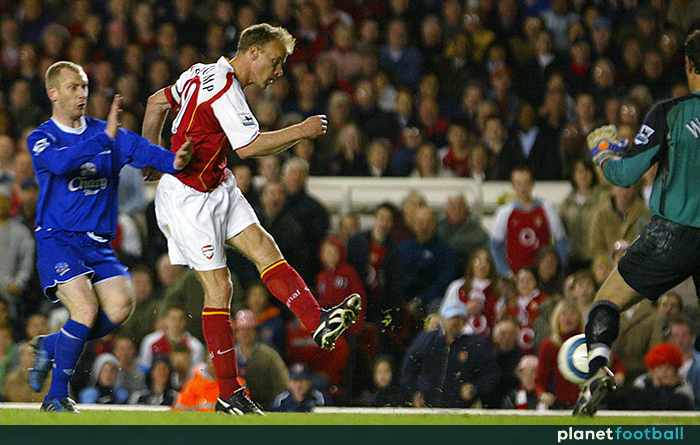 “One more year” the Arsenal fans shouted, in a spirited attempt to see their Dutch artist for one more season. And it worked: Bergkamp duly put pen to paper on a one-year contract extension after the FA Cup final win over Manchester United.

Bergkamp was limited to just eight league starts and 16 substitute appearances in that final season, but it was worth it. It was as important for the fans and the club to show their appreciation to Bergkamp as it was the other way around.

‘Bergkamp Day’ was even organised for a game against West Brom. Fittingly, he stepped off the bench with the score at 1-1 to set up Pires for a goal which put Arsenal ahead before scoring a third himself – his last ever goal – in the 89th minute.

It was not a great season for the Gunners, but fans got to enjoy Bergkamp’s artistry for that little bit longer before saying goodbye to one of their greatest ever players.

There have been and will be more phenomenal goalscorers. But there will only ever be one Dennis Bergkamp – the ultimate footballing genius.