An area synonymous with high crime and unemployment, held together by chemicals and steel, Boro is a rather unique industrial town with a population of around 142,000 situated on the south bank of the River Tees.

Yet ask anyone who ‘The Little Fella’ is round those parts and almost to a man (or woman) they will tell you without hesitation. It’s more than 20 years since Juninho Paulista stunned the footballing world by signing for Middlesbrough, but his contribution to their cause in the mid-1990s is still respected and admired by fans of the Teessiders and plenty of neutrals even now.

Just why is that Middlesbrough side of the 1996-97 season, a side that included Emerson, Fabrizio Ravanelli and the irascible Juninho, a side that played some genuinely outrageous football at times but who were ultimately relegated on the final day of the season, held in such reverence?

First of all, you have to remember the footballing landscape was so much different then. The Premier League was the Carling Premiership, and while there was plenty of Sky money sloshing around it had not reached the obscene levels that have become the norm today.

The more established top-flight clubs did have the odd foreign star (Ruud Gullit at Chelsea and Dennis Bergkamp at Arsenal being obvious examples), but it was practically unheard of for a club the size of Middlesbrough – they had been playing second-tier football just two seasons before – to sign a striker who had just helped Juventus win the Champions League in Ravanelli. 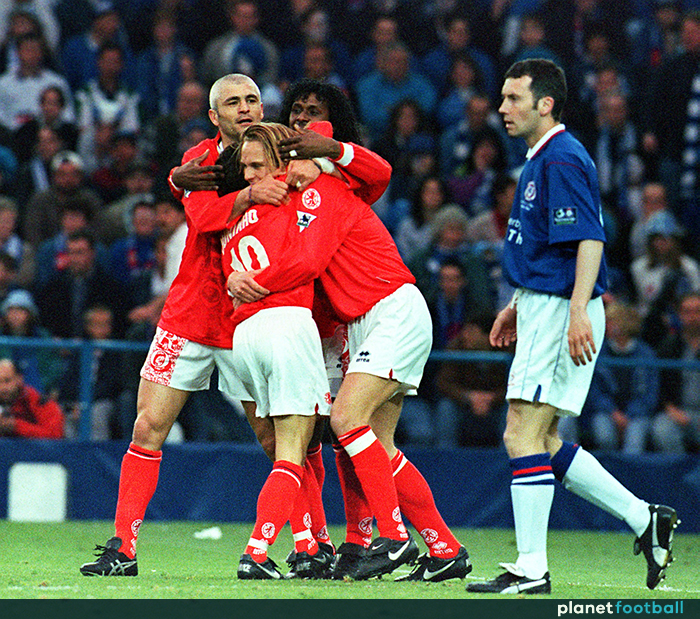 Or before that an established South American star in Juninho.

A Brazilian international on Teesside was almost incomprehensible back then. But these box office signings sent out a defiant message to Europe that English football was ready to flex its financial muscle and compete for the best players around.

These were bold, exciting times for Boro, led by their young boss Bryan Robson and backed by local boy made good in owner Steve Gibson. A shiny, brand new stadium (The Cellnet – the forerunner to The Riverside) and a massive spending splurge by a mediocre club which had almost gone out of existence a decade earlier, this was a case of Championship Manager played out in real life.

The signing of Juninho caught the footballing world by surprise. Kids stayed off school to go to Boro’s new ground and watch this cherubic genius doing volleys and waving his red and white scarf. It was love at first sight.

He was joined by combative Brazilian midfielder Emerson, who looked like a rock star and was as well known for his love of the Teesside nightlife as he was for his biting challenges and fierce long-range goals back then. 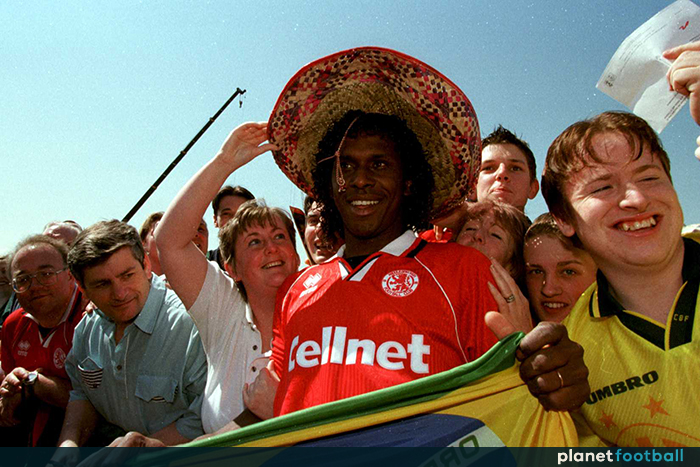 Then there was Mr Ravanelli. He may have looked like a middle-aged history teacher, but trust me, The White Feather could play. An instinctive goalscorer, Rav plundered 31 goals that season (including 16 in the league).

Two-footed and deceptively lively, he announced his arrival in the Premier League with a sumptuous hat-trick against Liverpool on the opening day of the 1996-97 season.

It was to be a crazy ride thereafter for Boro and their fans, taking in two cup finals and the last-day heartbreak of relegation at Leeds.

It was a season mired in controversy too, with Middlesbrough docked three points by the Football Association after claiming they were unable to field a team for an away fixture at Blackburn due to injury and illness. It proved the ultimate sanction, with those three points proving the difference between staying up and going down.

The years have passed, but the anger remains and some Boro fans feel the club were hung out to dry. The reality, though, is that the club were naive to think they could just ring in sick that day and expect Blackburn and the powers that be to just swallow it.

Yet if you think it was the FA that got Boro relegated that season, think again.

For all the money they lavished on expensive attacking imports, the squad lacked balance. Defensively they were weak, and an inability to properly replace Nigel Pearson when the veteran got injured towards the business end of the season ultimately did for them.

Make no bones about it, Middlesbrough were a match for anyone on their day, and if you’ve not seen it you could do worse than check out the highlights of their 3-3 draw with Manchester United at Old Trafford to see just what this side were capable of.

They ran the Red Devils ragged that day, and United would go on to lift the league title.

For Boro the season ended in suffering and sadness, with defeats in two major cup finals at Wembley and then relegation at Elland Road. It was an absolute rollercoaster of a campaign from start to finish, for a side scoring and shipping goals at will, and an era that all Boro fans remember fondly.

For pure excitement and an adrenalin rush, seasons like 1996-97 don’t come much better. Watching little Juninho battle – almost single-handedly it seemed at times – to keep Boro in the league was spellbinding stuff.

He finished up being named Premier League Player of the season that year, and no other player before or since has left his stamp on Teesside like ‘The Little Fella’ did.

As the old saying goes, it’s so hard to forget someone who gave you so much to remember.

READ NEXT: Fabrizio Ravanelli interview: ‘Nowhere you can live football as in England’