Gabriel Batistuta inflicted plenty of misery on English football fans over the years – as Arsenal and Manchester United supporters will attest – but he’s a player you just couldn’t help but admire… even as he was smashing one in against your team.

If you have been an English child on holiday in a major European city, you’ve probably been drawn to the rows and rows of fake football shirts that adorn every market, town square or street corner.

Even if you’re the type to mockingly dismiss any tourists doing the same thing on Oxford Street, your mind doesn’t work the same way while you’re overseas, for one important reason: holiday money.

As an impressionable 11-year-old in Florence for the first time, the art and antiques of the Tuscan city weren’t of a whole lot of interest.

Fake replica shirts, however, so thick that they produced more sweat than we realised the human body was capable of generating, were a different matter altogether.

In addition to the named and numbered shirts, including that glorious Viola home kit with Nintendo on the front, there were the photomontage efforts, a precursor to the musician and actor fandoms that would follow. Collared tees in club colours, depicting the most movie star-like members of Serie A’s finest.

They were of Italians mostly, dominated by at least two Alessandro Del Piero designs and a burgundy number depicting a young Francesco Totti, but one man stood out: Gabriel Batistuta. 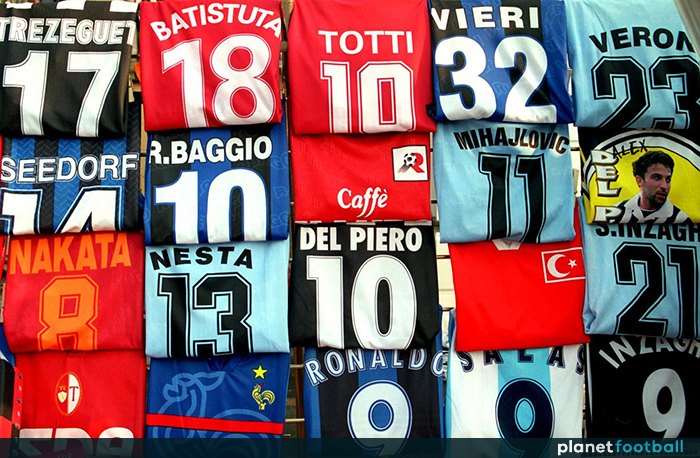 Now, before we begin in earnest, it’s worth bearing in mind there are two types of long-haired footballer.

On one hand you have the rugged centre-back or centre-forward, flowing locks flying backwards as they send a bullet-header into the opposition net.

At the other end of the scale is the flair player, who takes to the field like a prince held aloft on a throne as he strokes passes across the pitch and leaves opponents trailing in his wake. On one hand, the carthorse; on the other, the thoroughbred.

But then you have the player with both manes, who scores the goals of the cult figure with the frequency of the all-star… Gabriel Batistuta was football’s unicorn. 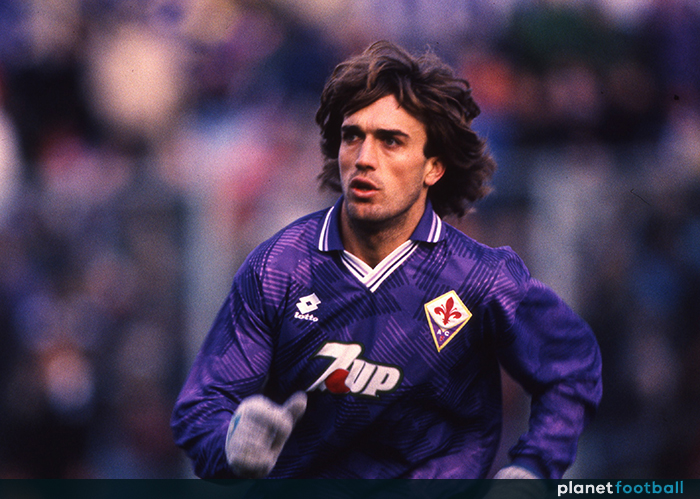 By the late 90s and early 2000s, Batistuta was not exactly unknown to English fans.

Batigol had been a Serie A staple for years, regularly scoring 20 goals per season at a time when Italian football was regularly on our screens, and had fired home a glorious World Cup hat-trick against Jamaica in 1998.

Try to get Gabriel Batistuta to stroke home a finish. I dare you. I double dare you.

He could strike the ball as if he was punishing it for killing his family, then hit it even harder the next time and the time after that, out of confusion at it coming back from the dead.

Take this goal against Manchester United as an example. You expect the close-control in the build-up, leaving Jaap Stam trailing in his wake, or the blistering, swerving finish beyond Mark Bosnich. You don’t expect both.

Gabriel Batistuta with a belter against Manchester United! pic.twitter.com/1OrYmz9qXK

That one at Wembley shows just what Batistuta, and that Fiorentina side in general, was capable of.

A showcase of high-speed passing and movement, all kicked off by a perfectly-timed slide tackle, countered as best as possible by a rearguard action from an Arsenal team still combining some of the best bits of the Arsene Wenger and George Graham eras.

A goalless draw in Florence earlier in the campaign meant victory would have put progress in the Gunners’ hands, and they had dominated proceedings early on. They were put on the back foot by the counter-attack, but it looked like the threat was almost over when the ball finally made it to the Argentinian.

How wrong they were. Going 74 minutes without a sniff didn’t matter to Batistuta – he was the sort of player who could take that one chance and not just convert it, but convert it with an utterly unsaveable shot.

He stunned Wembley 20 years ago with this cracker against Arsenal…

It brings to mind the episode of The Simpsons where Homer is guarding a pile of commandeered sugar like a hawk, only for an English gent to emerge over his shoulder with a mysteriously-sweetened cup of tea.

“I nicked it, when you let your guard down for that split second, and I’d do it again,” the Englishman says.

Pouncing repeatedly, on those rare occasions where the opponents relax and convince themselves the danger is over, is straight out of the Batigol playbook.

Oh, and that nickname, Batigol. Beautiful in its simplicity, just like the Wembley strike.

I like to think it first came up when a commentator was watching him in action – perhaps for Fiorentina, perhaps not – and didn’t even have time to get through the four syllables of his surname before the ball was in the back of the net.

It’s not like Inter’s Gabigol, a far inferior nickname which brings this to mind. This one feels far more natural.

When I returned to Florence two years on, some of the mystique had withered.

Batistuta was still at the club, but most of the shirts across the city bore the name of Nuno Gomes, the exciting new signing who had arrived fresh off an impressive Euro 2000 with Portugal.

And that would be the beginning of the end, with significant debts seeing the club shedding most of its stars – including Batigol – and later suffering demotion from Serie A.

He kept on scoring, though, and finally got the Scudetto that had eluded him for so long after moving to Roma.

En route to that honour, he found the net 20 times in the league, including a memorable strike against his former employers.

It’s a cliché to say ‘they don’t make them like him anymore’, but they really don’t. Of all the top strikers of the last few years, Didier Drogba is the only one with anything close to Batistuta’s all-around game and all-around beauty, both as a player and as a man.

It’s not all bad news, though. He may have stepped away from the game more than a decade ago, but we can still enjoy Gabriel Batistuta’s legacy by rewatching moments like this.