When Hernan Crespo joined Lazio from Parma on July 13, 2000, he became the world’s most expensive footballer. It was a tag he held for a grand total of 11 days.

While his £35million transfer – later rising with add-ons – had pipped Christian Vieri’s move from Lazio to Inter Milan the previous summer, it was almost immediately eclipsed by events in Catalonia and Spain.

Just over a week and a half after Crespo had signed the contract which took him to the Stadio Olimpico, Luis Figo moved from Barcelona to Real Madrid, sending the world media into a frenzy and setting El Clasico alight.

Crespo’s transfer became a footnote in history, Figo’s a reference point for every football fan.

However, Crespo was worth every penny and is just as much an icon of the game.

Whether or not Lazio should have spent so much on the man is a different question entirely. When Crespo joined the Biancocelesti their finances were already creaking under a decade of hefty expenditure, with club president Sergio Cragnotti lavishing money (and debt) on the team.

Crespo joined a side which had won the league the previous season and which groaned with the weight of talent at its disposal. His big-name team-mates included Pavel Nedved, Diego Simeone, Alessandro Nesta, Fabrizio Ravanelli, Marcelo Salas and Juan Sebastian Veron, to name but a few. 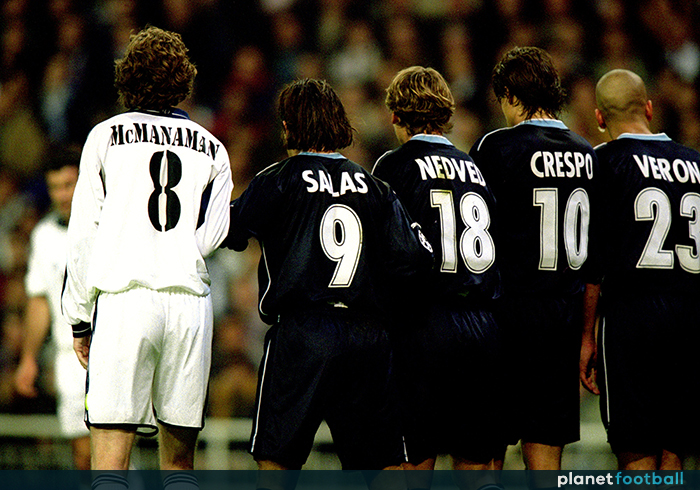 Sadly, many of those players would be sold to cover the club’s ruinous outgoings before long. Crespo himself would only last two seasons at Lazio before moving on for a considerably reduced fee.

The fact he was not sold on for a profit was not a reflection of Crespo’s contribution so much as it was a sign of Lazio’s desperate financial situation.

While he had suffered intermittently with injury during his second year in Rome, the whippy, nippy Argentine had still managed 20 goals in all competitions, this after a debut campaign in which he had found the net 28 times.

With 26 of those coming in the league, that had been enough to secure his status as Serie A’s top scorer.

In a league famed for its defensive excellence, that was no mean feat. But Crespo could score goals any which way, from glancing headers and poacher’s efforts to glorious half-volleys and off-the-shoulder strikes.

What was always most impressive about Crespo was his sublime technique, his ability to turn a bobbling lay-off into two swift touches and a curving finish.

Combine that with eagle-eyed vision and a mathematical brain for angles, and the result was a goalscorer who could change almost any game.

While it was Crespo’s compatriot Claudio Lopez who made the difference in his only ever final with Lazio – the 2000 Supercoppa Italiana – Crespo’s performance in that match summed up the variety he brought to the playing field.

He wasn’t among the scorers in Lazio’s 4-3 victory over Inter Milan, but he laid on their second goal with a beautiful bit of control and opened up the Nerazzurri with his runs time and again.

It was Inter who would snap him up during the fire sale of players at Lazio, and Inter with whom he would have his best years from then onwards.

That said, his career was somewhat disjointed from the time he arrived at the San Siro in August 2002.

Injuries limited him to only 18 appearances in the league that season, and while he was still relatively prolific it was a difficult campaign for him.

He then became one of the first marquee signings of the Roman Abramovic era at Chelsea, enticed to London by Claudio Ranieri, a man who knew Serie A well enough to realise that Crespo had what it took to conquer the Premier League.

But Crespo’s spell at Chelsea was a strange one, and didn’t quite work out how either he or Ranieri had hoped.

After a bitty first season again disrupted by fitness issues, Ranieri was sacked, Jose Mourinho installed and Crespo judged surplus to requirements before being sent out to AC Milan on loan.

He would win the Supercoppa again that term, but his time with the Rossoneri is most famous for his brace in the Champions League final, a game which they would go on to lose to Liverpool after a miraculous second-half comeback.

As such, Crespo had a starring role in the ‘Miracle of Istanbul’, even if that match is now remembered more for Steven Gerrard, Vladimir Smicer and Xabi Alonso scoring an improbable trio of goals.

Crespo’s career could have been tainted by an air of promise unfulfilled at that point, but it was after that bruising Champions League final that he really came back into his own.

As if reinvigorated by his thump-and-dink double past Jerzy Dudek – even if Milan’s legendary defence had somehow contrived to blow the lead he had gifted them – he returned to Chelsea with a point to prove, and was given the space to do so by a more receptive Mourinho.

It was then that Crespo sealed his status as a cult hero among Chelsea fans, with his elegant interplay, incisive attacking and smattering of goals helping to deliver another title.

Watching his goals back, it is impossible not to be impressed by his craft and intelligence.

Though he would leave again for Inter (initially on loan) at the end of the season, Crespo later told The Daily Mail he would have stayed had it not been for tragedies in his private life which compelled him to move back to the country he had, for so long, called home.

Back in Italy, Crespo won three back-to-back titles under Roberto Mancini and then Mourinho at Inter.

He never matched his goal tallies from his vintage years at Parma and Lazio, but the sight of his long mop of hair billowing in the wind as he celebrated was nonetheless a staple of Serie A again.

If he had once been the most expensive player in the world on account of his inspired artistry as a striker, he was arguably more valuable in his later years; a priceless talisman even as he aged and turned from gold into quicksilver.

He no longer commanded a world record fee, but he brought joy and silverware wherever he went, a reminder of how hard it is to put an accurate price on genius.

A tribute to Pavel Nedvěd, the man who managed to replace Zinedine Zidane

The story of Gigi Simoni, Inter and the great Serie A controversy of 1998