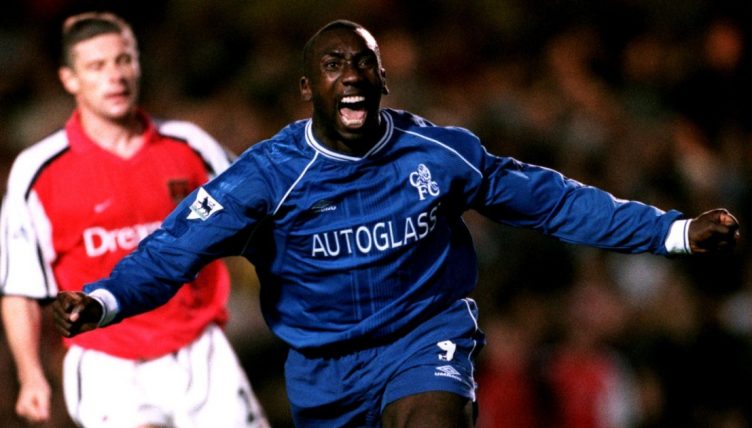 Jimmy Floyd Hasselbaink was a tremendous goalscorer for Leeds United, Chelsea and Middlesbrough in the Premier League – and a real joy to watch for anyone who likes bloody hard shots.

Football in the modern era can be tremendously complex, but the thrill of the sport is often found in the simplest of things.

It’s also why Jimmy Floyd Hasselbaink was such a captivating footballer.

A complicated character off the field, Hasselbaink knew how to appeal to our base instincts. Namely, he could kick the ball into the back of the net with the ferocity of Mike Tyson obliterating whichever unfortunate soul he happened to share a ring with. Throughout Hasselbaink’s life, two things have remained a constant: a tendency to attract controversy, and an ability to score a bucketload of goals.

You get the picture: Jerrel Floyd Hasselbaink was born to score goals – lots and lots of goals.

But there has always been two sides to the Dutchman. You could see it in his celebrations, of which there were two distinct types he would always revert to after the ball had inevitably hit the back of the net.

Firstly, there was the joyous, open arms and grin of a man fulfilling his purpose in life, often with some awkward acrobatics or dance thrown in out of a sheer, childlike giddiness.

But then there was the stern, angry response of incredulity, the annoyed glare of a man who believed each of his goals really ought to be worth more than one. 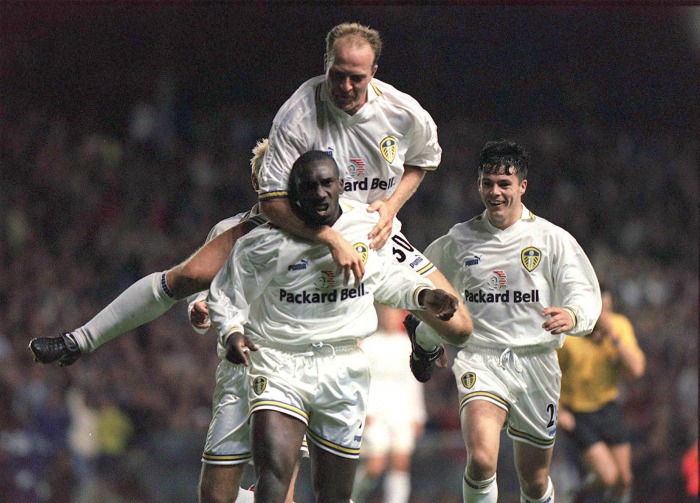 Born in Suriname, Hasselbaink was raised by his mother on the mean streets of Zaandam, near Amsterdam. One night, carrying a knife, he was part of a gang stealing people’s tickets outside a Public Enemy gig. After being caught, he spent three months in a youth detention facility.

“We were in the poor area with a lot of people from Suriname, Turkey and Morocco,” he told The Guardian in 2005. “We lived in this 14-storey block. Sometimes I’d be playing football at the back with my mates and we’d see a body falling.

“We saw people kill themselves two or three times and we weren’t surprised. There were a lot of broken people, a lot of bad things. I carried a knife myself but I never used it because, really, it was just to look cool.”

Football “saved” Hasselbaink, giving him the chance to escape the fate of a prison cell or drug addiction which beckoned for many of his friends at the time.

After starting his career with Telstar and AZ Alkmaar in Holland, he arrived at Leeds United in 1997 in a £2million deal from Portuguese outfit Boavista.

George Graham’s Leeds had scored only 28 times in 38 Premier League matches the season before Hasselbaink’s arrival – only once more than Hasselbaink had managed himself for Boavista – but while Elland Road may not immediately have seemed like the ideal destination for a fiery goalscorer, Graham proved to be the authoritarian figure the Dutchman needed to realise his full potential. 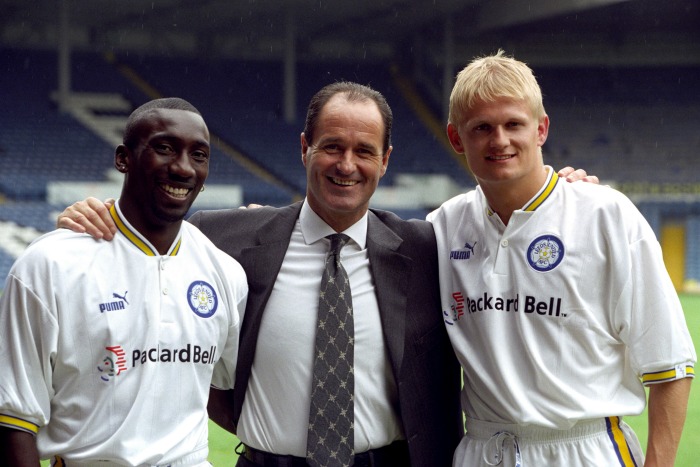 A goal on his debut against Arsenal was the perfect start to his career in a white shirt, but he would have to wait until November for his next league goal and had scored only five times in the Premier League by Christmas.

However, something clicked in the second half of the season, and he would go on to finish with 22 goals in all competitions, firing Leeds to fifth, their highest finish for three years, and UEFA Cup qualification.

“[Graham] was very hard on me,” Hasselbaink told The Independent in 2005. “He used to get on to me about everything; me not working hard, me not running in the channels. And yes, at times, I thought, ‘Hell, he hates me. What does he want?’

“In those early years, I needed someone to be hard on me. George was, really hard. It was not always fair, but it made you realise that you had to play well every match.

“And that’s why we did well as a team. It’s only afterwards, as you get older, and he’s gone, and you experience other managers, you knew George was right.” 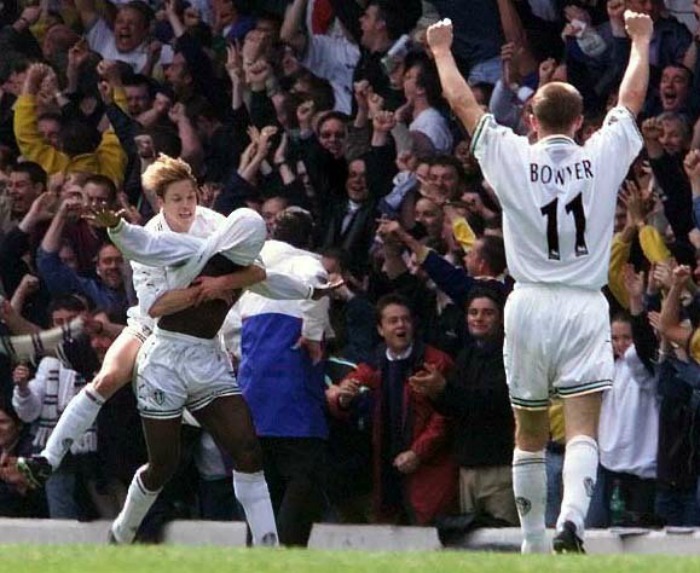 Graham would depart for Tottenham only two months into the following campaign, but there was no stopping Hasselbaink’s quest for goals by this point.

A match-winning brace at Anfield and a predatory strike against Manchester United – the ultimate for any Leeds centre-forward – were among the highlights as he cemented his status as a fan favourite with a 20-goal haul in all competitions.

The Yorkshire club would go one better than the previous season, finishing fourth under David O’Leary, with Hasselbaink sharing the Golden Boot award with Michael Owen and Dwight Yorke

But things would soon turn sour between the player and club. With Hasselbaink wanting his £20,000-a-week wages doubled, O’Leary and chairman Peter Risdale were fairly vocal in their condemnation of the attacker – somewhat ironic given the extortionate salaries they would later go on to hand out.

“It is unsurprising that some people have formed that opinion that he is a greedy son of a bitch,” O’Leary told the Yorkshire Evening Post’s Phil Rostron.

“It seems to be the mentality of some foreign players, particularly those of Dutch extraction, that they are entitled to get what they want and sulk when they do not.”

Hasselbaink was eventually sold to Claudio Ranieri’s Atletico Madrid in a £10million deal – and become known as “Jimmy Floyd Piggybank” to some Leeds supporters – but it would not be long before he returned to England.

His one season in Spain ended in relegation and defeat in the Copa Del Rey final, but it was yet another fruitful campaign for Hasselbaink personally, with 33 goals in all competitions, including a brace in a 3-1 victory over Real Madrid in Atletico’s first win at the Bernabeu for nine years.

With Atleti facing a season in the second tier, Chelsea equalled the British transfer record to sign Hasselbaink for £15million.

Having signed Chris Sutton in a disastrous £10million move the previous summer, the transfer was a big gamble for the Blues – and one which made the hitman even more unpopular with Leeds fans given the two clubs’ rivalry.

Given Sutton’s failings, there was plenty of pressure on Hasselbaink, especially after Gianluca Vialli was sacked only a month into the 2000-01 campaign, but he went on to thrive at Stamford Bridge.

A debut goal at Wembley against Manchester United in the Charity Shield meant he lifted only his second piece of silverware in his first appearance for the Blues, and there was a strange twist of fate when Ranieri – who had resigned during Atleti’s dismal season – was reunited with the striker as Vialli’s successor.

Yet again Hasselbaink continued to do what he did best: put the ball in the back of the net with remarkable consistency, winning the Golden Boot outright thanks to 23 goals.

Baller of the Day: Jimmy Floyd Hasselbaink scoring a perfect hat-trick for Chelsea vs. Spurs in 2002

As always, there was also an instance of controversy as he had to be restrained by Winston Bogarde after clashing with team-mate Christian Panucci during a 2-0 defeat to Leicester.

The following two seasons, though they weren’t as personally productive for Hasselbaink, saw Chelsea finish second and then fourth. There was also a Champions League semi-final appearance after knocking out Arsenal’s ‘Invincibles’ with a memorable victory at Highbury.

The duo developed an excellent understanding on the pitch, with the ice-cold Scandinavian complementing the intense Dutchman, but it was certainly less profitable off it, where they would often gamble together – with Hasselbaink later admitting he lost over £100,000 at roulette. 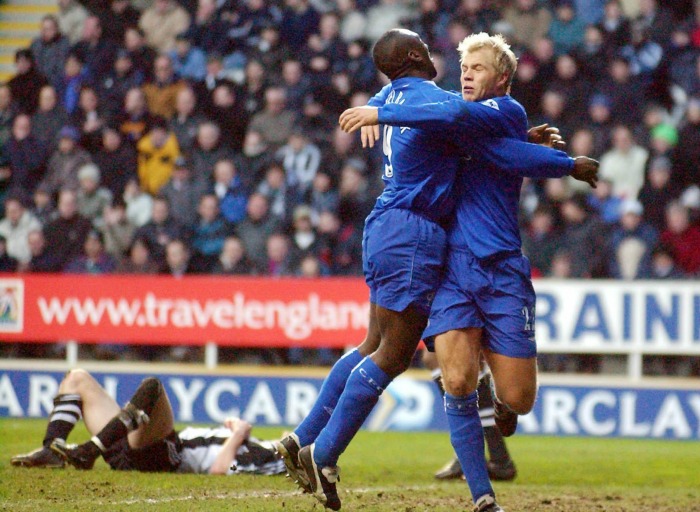 During this time Roman Abramovich had taken over Chelsea and the west Londoners were starting to spend big. Hernan Crespo and Adrian Mutu both arrived in big-money deals from Serie A to bolster the forward line.

Ranieri described the latter as a “shark” but Hasselbaink remained the deadliest predator at Stamford Bridge, outscoring both players in 2003-04.

But it would still prove to be his last season at Chelsea, who replaced Ranieri with Jose Mourinho in the summer.

Hasselbaink left for Middlesbrough, where he formed a successful partnership with another former Leeds striker in Mark Viduka, helping the club to the UEFA Cup final, before winding down his career with spells at Charlton and Cardiff, for whom he appeared in a FA Cup final.

Cast aside too soon?

While there was a sense at the time that Chelsea had outgrown Hasselbaink, hindsight suggests they may possibly have got rid of the fan favourite too soon, and it certainly rankles with the player himself.

Hasselbaink would never have stopped Didier Drogba becoming a Blues icon, but it is worth remembering it took the Ivorian time to settle in England. Mateja Kezman, meanwhile…well, the less said about him the better.

“What do I say? Drogba cost £24million. In the first year, he didn’t score more than I did – and I was playing at Middlesbrough,” Hasselbaink told The Independent.

“But I never spoke to Mourinho. Peter Kenyon called my agent and just said, ‘OK, we’re going to let Jimmy go’, and that was it.”

Hasselbaink’s career ended with 250 club goals but only the Portuguese Cup and Charity Shield to show for them.

At times, it feels like his reputation as a difficult personality overshadowed his ability as one of Europe’s most delightful goalscorers. A notion which the player lamented after he left Chelsea.

“Look at me and George Graham,” he said. “He is very strict, but I love George! That’s why Mourinho appealed. If he gives you the chance, he is very tough but fair. He’s also one of the few managers who can make you 5% better as a player.

“Under Mourinho I could have been a Premiership champion last year – and who knows how many trophies Chelsea might win this season? I’ve not won many medals so I think about what might have been.”

It’s easy to wonder what might have been with Hasselbaink, but it’s much more satisfying to acknowledge what he was.