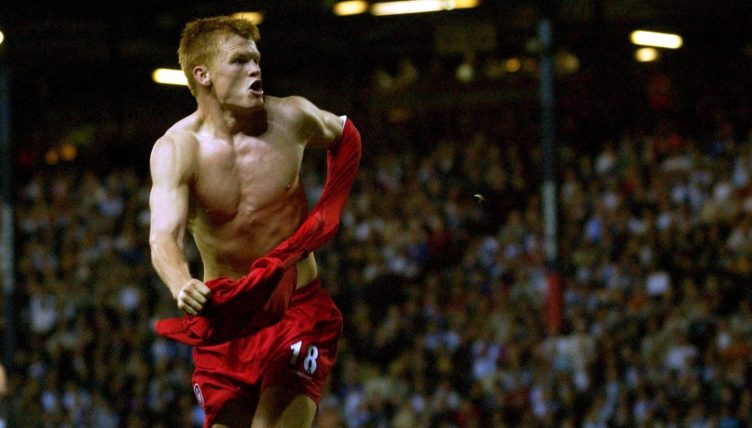 John Arne Riise was an excellent left-back for Liverpool. More importantly, he was also an excellent scorer of thunderbastards.

“Johnnnn Arne Riiissaahh, oooohhh, ahhh, I wanna knoowwwww, how you scored that goal.” So goes the chant.

Well, let me tell you. John Arne Riise scored that goal the same way he scored just about every other goal he ever scored: by kicking the ball really, really hard.

Riise scored 31 goals in seven years with Liverpool. Now that may not sound like many. But it’s the way he scored them that makes him so special.

He wasn’t a fan of subtlety: 17 of his goals could be described as laced, volleyed, whacked, thrashed, smashed or hammered into the net; nine came from close-range; two were runs followed by uncharacteristically restrained finishes; two were free-kicks; one was a header.

That’s a staggeringly wonderful ratio for any player. John Arne Riise was, in theory at least, a left-back.

Riise was bought from Monaco by Liverpool manager Gerard Houllier in 2001. He cost just £4.5 million, despite interest from Leeds and Fulham. What value for money that investment would turn out to be.

But he also became something much, much more valuable: the trigger for fans to get up off their seats.

There was no messing about from the red-headed Norwegian either. He got straight to it when he arrived on Merseyside, marking just his second league start in the best possible way.

Playing at Goodison Park in his first-ever Merseyside derby, with the score at 1-2, he collected a pass from Danny Murphy on the break, sprinted up the pitch, turned poor old (only 27 at the time, but looks it) Steve Watson inside out before placing a controlled side-foot finish past goalkeeper Paul Gerrard.

It was to be the first of many memorable goals for the rampaging left-back.

That goal was celebrated with a shirt over the head and knee-slide. This was another trademark that defined his early years at Liverpool. Careful tallying shows he produced carbon-copy celebrations on 10 occasions for the Reds.

Tragically, once FIFA reintroduced yellow cards for removing the shirt in 2003, our protagonist had to tone down his jubilation.

Subsequently, his net-busters were frequently followed by ‘normal’ shows of emotion: an arm in the air, a salute to the crowd, the embracing of team-mates.

Riise was a well-liked character in a successful Liverpool dressing room. His legacy is intact, despite a couple of real bumps in the road during his time at Anfield.

He was the only Liverpool player to miss a penalty in the 2005 Champions League final shoot-out win over AC Milan in Istanbul, for example.

And he also scored an own-goal in the 2008 Champions League semi-final against Chelsea, which Liverpool went on to lose.

Worse: it was a classic of the genre – an ill-advised diving header into the top corner. Worse: it was at the Kop End. Worse still: it was in the 95th minute. He’s not keen on talking about it either.

It is a measure of the man, then, that he is remembered fondly as a cult player. We’d all be lying to ourselves if we said it was for any other reason than the goals he scored. Or the commentary he inspired…

Riise played like someone who watched too many videos of Roberto Carlos. He began his Reds career playing at left-back, yet was perennially on the overlap, leaving Rafa Benitez little option but to push him further forward and diminish his defensive responsibilities.

This went some way to addressing the number exasperated cries of “What is he doing there?!” from fans.

His unique style had its obvious drawbacks, of course.

Solid defenders are generally pessimists, constantly readying themselves for the worst possible circumstances. Riise was an uber-optimist; if Liverpool won the ball in midfield, Steven Gerrard, Dietmar Hamann, Xabi Alonso and co, could always rely on the flying Norwegian to be bombing up on the left flank.

Playing in a similar way to the bloke at five-a-side who insists he’s an ‘overlapping centre-back’ also had its positives too. This was because Riise was blessed with a piece of long-range military artillery on the end of his left leg.

Riise is almost singlehandedly responsible for the exponential growth of adjectives in football’s lexicon. Why? Watch any of Riise’s strikes and a simple staple of the genre just won’t do it justice.

Perhaps the best example is Riise’s rocket-powered drive in Liverpool’s 3-1 win over Manchester United in November 2001. This was the goal Riise made this comment about: “I didn’t even feel like I’d hit it.”

Well, Fabian Barthez certainly thought you hit it, John. In fact, you hit it at 70mph. You also spawned film review-type descriptions from match reporters.“An unstoppable thunderbolt” said the BBC while The Guardian said: “A left-footed shot of such power it was a wonder the bar did not break.”

Riise’s dedication to his art is comparable to any other artist. “I used to spend five or six hours a day practising my shooting technique when I was young,” he said, recalling one of his most famous strikes recently.

Visions of a young Riise smashing countless footballs over his garden fence raise a smile, but they were clearly worthwhile.

This is a man who developed a shot so powerful it broke Alan Smith’s leg.

This is a man who scored a wonderful array of what were essentially the same goal. This is a man who is responsible for a gross amount of popped footballs, left to rot in hedges around the globe.

This is a man who inspired countless Sunday league players to shoot every time they received the ball, no matter what position they found themselves in.

John Arne Riise, for your unflinching services to kicking the ball really, really hard at every possible opportunity, we salute you.

READ MORE: Ranking every player to wear No.6 for Liverpool in the Premier League era