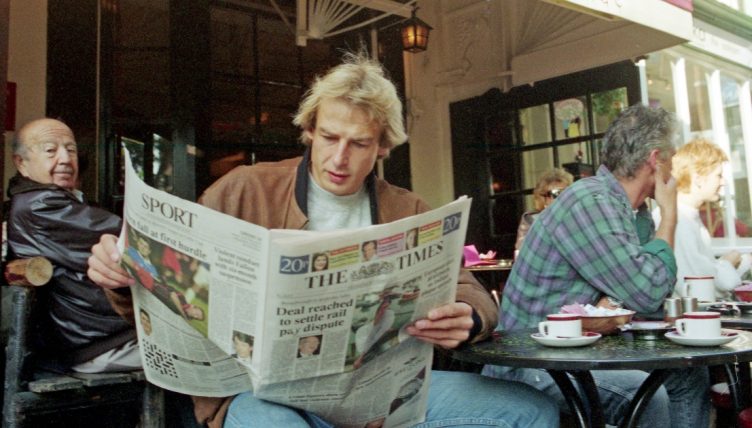 Jurgen Klinsmann only spent one season at Tottenham after signing from Monaco in the summer of 1994 – but it’s a season few fans will ever forget.

Klinsmann was already 30 when he moved to White Hart Lane, but make no mistake about it, he was a huge signing for both Spurs and the Premier League.

Thirty goals followed in his debut season in north London, and though he departed at the end of it, his success had a genuinely seismic effect on English football. He was a true superstar. And an absolute bargain…

In 1994, Tottenham Hotspur were struggling. Alan Sugar’s appointment of club legend Ossie Ardiles as manager was proving disastrous, the club had been in and out of the courts over off-the-pitch affairs, and the team had ended the 1993-94 season just three points above the relegation zone.

Thanks to Sugar’s millions and the new Premier League riches, they had the money – and the attraction of living in London gave Spurs a huge pull-factor.

What they needed was a big, glamorous, exciting signing to propel them up the table and make Tottenham a destination club.

In the summer of 1994, for the £2million Tottenham spent on Klinsmann, they could also have got: 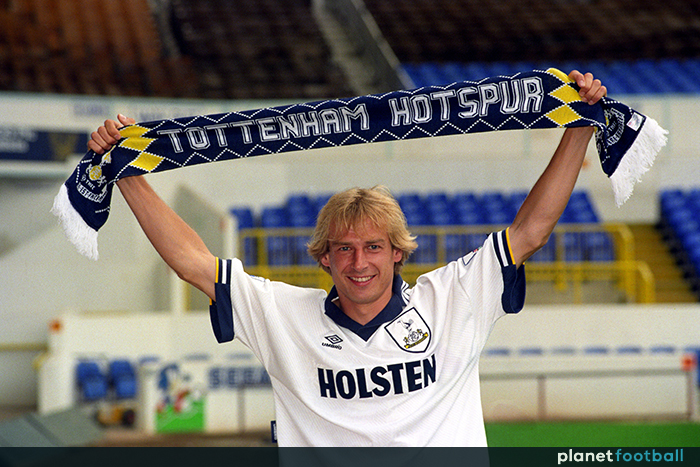 It is really hard to overstate what a rare and unusual thing it was for an English club to sign a foreign player at the peak of his powers. The closest thing the country had seen previously was Spurs’ double signing of Ardiles and Ricardo Villa, who joined following Argentina’s triumph in the 1978 World Cup.

There was a sprinkling of overseas players across the league – most notably Eric Cantona and Peter Schmeichel at Manchester United – but none of them could boast of the kind of achievements and fame Klinsmann had already amassed when he rocked up at White Hart Lane in 1994.

A World Cup winner, two-time German footballer of the year, UEFA Cup winner with Inter, and scorer of 168 goals in 388 top-flight appearances in three different countries, 30-year-old Klinsmann was already a household name in England. 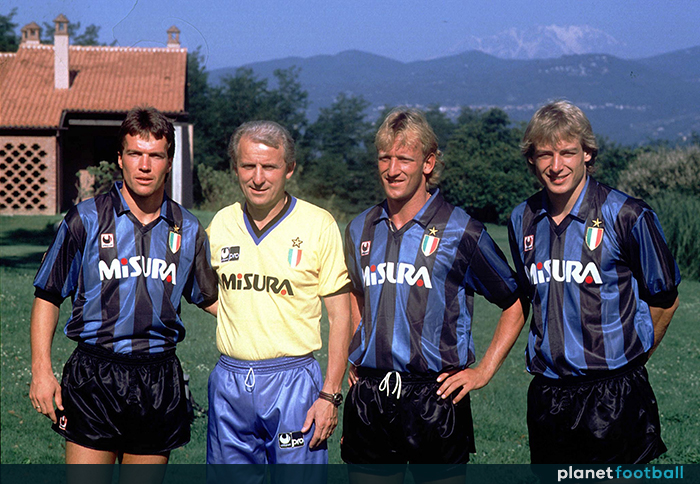 This, it has to be said, was not a particularly positive thing: the abiding memory was of his performance in England’s most heartbreaking ever game, the still-fresh semi-final defeat to Germany at the 1990 World Cup.

Also, of course, and, more infamously Klinsmann’s subsequent dive to get Argentina’s Pedro Monzon sent off in the final.

Watching it through modern eyes, the shin-high tackle seems at least as bad an offence as what followed, but in 1990 we Brits were still acting as self-appointed moral arbiters of the game.

Klinsmann arrived at Tottenham with the perfect blend of talent and notoriety for the fledgling and increasingly publicity-hungry Premier League. Before the season even started, the Guardian ran an Andrew Anthony article headlined ‘Why I Hate Jurgen Klinsmann’.

Such a footballing pariah could barely have joined a more apposite club than Tottenham. Their chairman, the not-yet-titled Alan Sugar, was likewise a figure of derision within the tabloid press for his big-spending ways and, most of all, for his sacking of beloved chief executive and de facto manager Terry Venables the night before the 1993 FA Cup Final.

When Klinsmann’s signing was announced, the reaction was that they were a match made in heaven: the cheat and the bastard.

But then something happened that caught the press totally off-guard: it turned out Klinsmann was funny, and charming, and downright likeable. 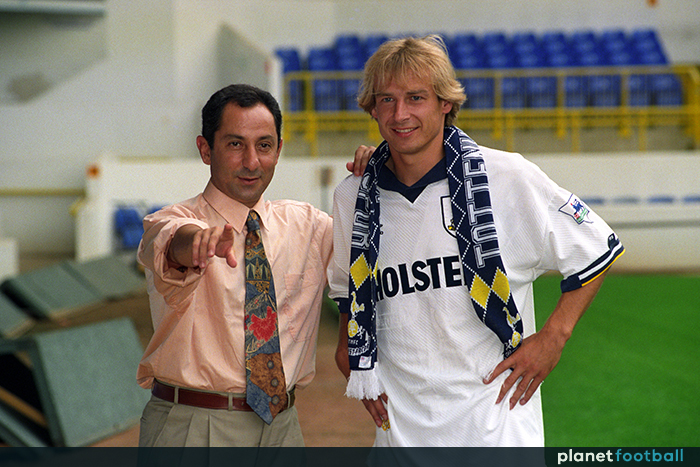 In his first interview, Jurgen Klinsmann looked out to the assembled press and said: “To begin with, I have a question for you…Is there a diving school in London?”

The Times’ take perfectly captured the shift in attitudes towards the German – though scepticism towards Sugar remained.

“Once his cult status as master of the high-tariff dive has eroded under passage of weekly appearances, there is a lot to like about Klinsmann,” The Times wrote.

“If only all ogres were so agreeable. His chairman, Alan Sugar, is another cult-ogre of football, sacker of El Tel and so on.”

Most tellingly, The Guardian ran a second Andrew Anthony article, just six weeks after the first and with a ball still yet to be kicked. The headline? ‘Why I Love Jurgen Klinsmann’.

The press were starting to turn around – and Klinsmann celebrating his late goal in a 4-3 win against Sheffield Wednesday on the opening day of the season by diving arms first across the turf helped him win the public’s hearts too.

1994-94 @J_Klinsmann announces his arrival in England with an memorable goal and iconic celebration in Spurs 4-3 win over Sheffield Wednesday #Keepit90s pic.twitter.com/hol7GvFWkc

Klinsmann’s initial stay in England lasted just one season, but it was one of the greatest individual seasons English football has ever seen.

There was no bedding-in period to speak of: the striker scored seven goals in Spurs’ first six games of the season, with his efforts in those games alone worth seven points to the side.

That was to become something of a theme, with Klinsmann’s goals securing wins against West Ham, Everton, Sheffield Wednesday and Leicester.

The crowning moment, though, was his 89th-minute strike as Spurs came back from a goal behind to beat Liverpool in the FA Cup quarter-final. 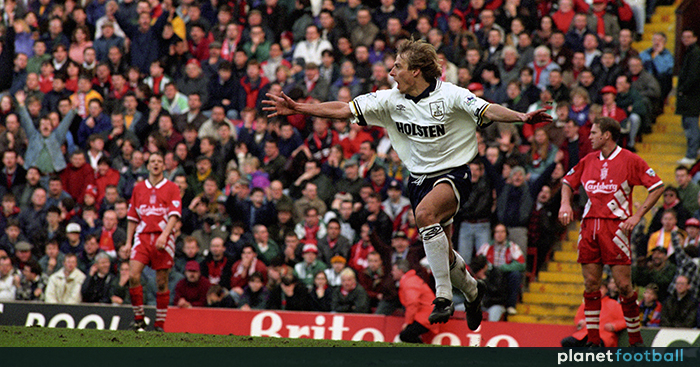 Klinsmann was relentless throughout the season, scoring 30 times in all competitions.

He ended the season as the first player ever to win the Football Writers’ Association Player of the Year in his first season in England, was selected in the PFA Team of the Year alongside Blackburn’s fearsome SAS (Chris Sutton and Alan Shearer), and ended 1995 as the Ballon d’Or runner-up.

The following summer, he captained Germany to victory at Euro 96. Not too shabby.

Klinsmann did his standing with Spurs fans no harm by returning for a second spell in 1997-98, scoring a goal every other game to help the side avoid the spectre of relegation.

Most importantly, though, Klinsmann helped break down sceptical attitudes towards foreign players, showed that big names could be tempted to the bright lights and big money of English football, and encouraged managers to be more adventurous with their scouting and transfers.

More than two decades later, Klinsmann’s influence lives on in the Premier League.