A tribute to Kevin Keegan and Newcastle United’s Entertainers

On January 18, 1997, Kenny Dalglish took charge of his first Newcastle United game. But as far as the club’s supporters were concerned, the King was dead.

Kevin Keegan had unexpectedly quit as manager 10 days earlier for reasons which even now are unclear. Newcastle were fourth in the Premiership, had signed Alan Shearer for a world-record £15million, and had beaten Leeds United 3-0 in Keegan’s final game. The game before that, they thrashed Tottenham 7-1.

Perhaps Keegan knew what was coming. United improved to finish second and make the Champions League under Dalglish, but 12 months later they finished down in 13th. The arrival of Dalglish was exciting initially, but Keegan’s departure ultimately proved to be the end of an era.

Keegan’s team may not have won every game, but you could always guarantee entertainment at St James’ Park.

Bristling with enthusiasm and personality, Keegan’s character traits transferred themselves onto the players he worked with. Whether it was local lad Steve Howey or France international David Ginola, Keegan had an ability to convey a message and motivate.

But to describe his team as simply ‘motivated’ would not do justice to their scintillating style of football.

Nicknamed ‘The Entertainers’, by modern standards Keegan’s tactical approach may look simple. Operating with a 4-4-2 formation and two traditional wingers, Keegan approached the Premiership with the belief that his team could always outplay their opposition.

Managers of newly-promoted teams nowadays are accused of naivety when adopting such a philosophy, but in Keegan’s case it worked. In the four Premiership seasons following promotion the team finished third, sixth, second, and second. They may not have won silverware, but that team inspired a generation of supporters on Tyneside. 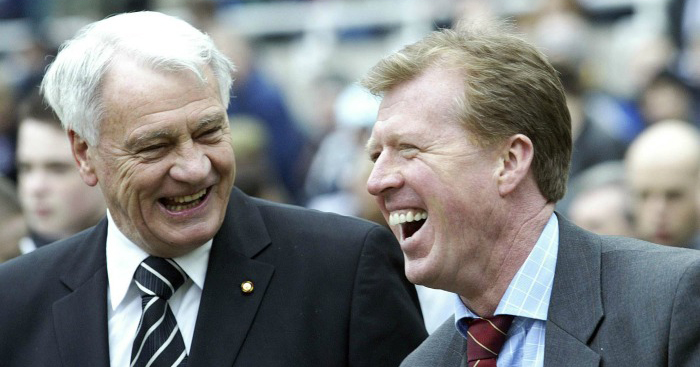 Of course it wasn’t all smooth sailing. The fans’ relationship with Keegan was tested in January 1995 when he agreed to sell Andrew Cole to Manchester United.

But stood on the steps of St James’ Park, Keegan asked supporters to trust him, and trust him they did. In return, he took them into European competition and delivered some of the most exciting football played by any team during the 90s. More importantly, he allowed Newcastle fans to dream again. There was a buzz around the city.

So much so, in fact, that Alan Shearer – a sheet-metal worker’s son from Newcastle – was convinced to reject Manchester United in favour of the Magpies.

Joining the club from Blackburn Rovers for £15million, the deal broke British transfer records in August 1996. They may have lost Cole, but one of their own was on Tyneside, and the trade suddenly seemed more than fair. Keegan, with the help of Sir John Hall’s cheque book, made it possible. 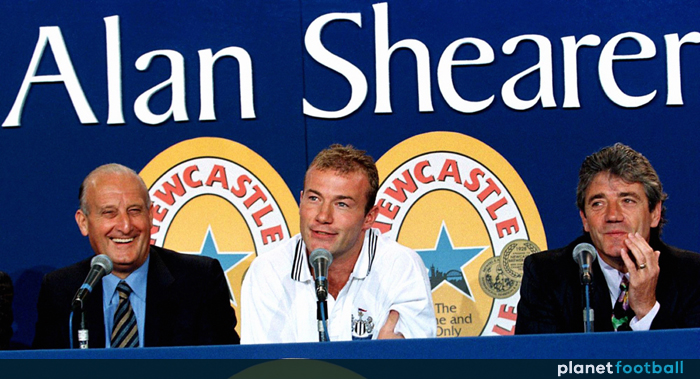 When assessing his time as Newcastle manager, there is one game which simply cannot be ignored: the 5-0 demolition of Manchester United represented a perfect home performance.

Coming against Newcastle’s then-biggest rivals, it allowed the team a modicum of revenge for losing the Premier League title the previous season and for a 4-0 humiliation in the Charity Shield months prior.

Goals from Darren Peacock, Ginola, Les Ferdinand and Shearer had put the Magpies ahead, but the coup de grâce was delivered by Philippe Albert with a goal to reinforce Keegan’s message of cultured football.

Receiving the ball from Rob Lee, Albert raced towards the weary Manchester United defence. As all around him cried ‘shoot’, few expected what came next, including Peter Schmeichel. Albert delicately lifted the ball over all in front of him, including the helpless Dane who could only watch as it glided over his head and into the gaping net.

Delirium overtook both those in the stands as well as the commentary box. Sky’s Andy Gray proclaimed: “Well if the rest was the cake, there is the icing. A quite majestic goal from Philippe Albert.”

On This Day in 1996, Philippe Albert scored THAT chip in our thrilling 5-0 victory against Manchester United.

One of my favourite games ever 🙌 #NUFC pic.twitter.com/hdAmG7LTbp

From the brink of relegation to the third tier in 1992 to beating Manchester United 5-0, it had been one hell of a ride. As Keegan stood at the top of the tunnel afterwards, Eric Cantona shook his hand and said: “You have a f***ing good team.”

The financial backer through it all, Sir John Hall, professed that: “Today the country has seen the English Champions.”

Ironically, he was right as Manchester United would once again lift the title, but Newcastle had won the hearts of many with their attacking brand of footballing entertainment.

Keegan’s meek exit via a public statement three months after that game served as stark contrast to the exit he made as a player in 1984, via helicopter to a backdrop of fireworks. But there was no anger felt towards him, only crushing disappointment.

As Newcastle fans wrestle with the ownership of Mike Ashley they are reminded of Keegan’s greatest achievement. It was not the slick football, big names, or big results, that stayed with them most, but rather the trust and warmth he engineered between supporters and the club. Statements were taken on face value and could be accepted without questioning.

Perhaps it is fitting that when Keegan tried to work with the current owners he could not. A nasty situation that ended with a court case and a victory for Keegan, it served only to cement his legacy as one of the club’s own, and one of the best things to ever happen to Newcastle United Football Club.