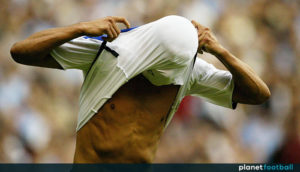 Everton’s Tim Cahill celebrates scoring against Manchester City by pulling his shirt over his head during their Barclays Premiership match at the City of Manchester Stadium, Manchester Saturday, September 11, 2004. Cahill was sent off by referee Steve Bennett for his second bookable offence following his celebration. THIS PICTURE CAN ONLY BE USED WITHIN THE CONTEXT OF AN EDITORIAL FEATURE. NO WEBSITE/INTERNET USE UNLESS SITE IS REGISTERED WITH FOOTBALL ASSOCIATION PREMIER LEAGUE.