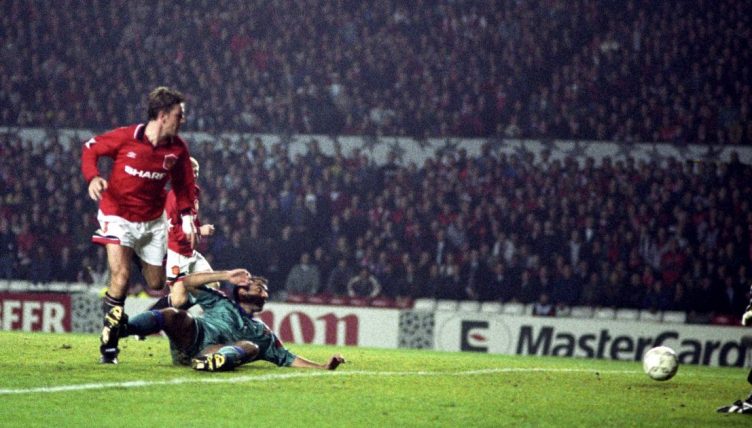 When we talk about Sir Alex Ferguson’s best Manchester United teams, it’s usually presented as a straight fight between the two Champions League winners of 1999 and 2008. But the class of 1994 was right up there.

United were still a few years off seriously competing in Europe, but having won the inaugural Premier League, they retained it in 1993-94, added the FA Cup and were only denied a domestic treble by a League Cup final defeat to Aston Villa.

Paul Ince told us that team would have beat the Treble winners, and while you might think, ‘Well, he would say that,’ it was undoubtedly an exciting time to be a United fan, with Roy Keane making a big impression in his first season at Old Trafford, Eric Cantona hitting 25 goals, Mark Hughes smashing 22, and three wingers also reaching double figures.

Ryan Giggs scored 17 and Andrei Kanchelskis 10, but while the former would go on to become a club legend and the latter kick on to top score for United the following season, a combination of injuries, the form of the aforementioned two team-mates and the later emergence of David Beckham meant the 93-94 campaign was as good as it got for Lee Sharpe.

Well, kind of. Sharpe made 41 appearances that season, 33 of them starts, and scored 11 goals, including a brilliant volley at Everton, but mention his name to any United fan of that era and the first goal they’ll think of is almost certainly the one he scored against Barcelona in 1994-95.

It wasn’t a vintage season – Fergie signed only David May and Graeme Tomlinson in the summer leading up to it, and United ultimately finished trophyless – but a season with fewer highlights than usual just means this goal gets to stand out in the memory that bit more and we’re all for that.

Sharpe certainly isn’t the only player to score a goal like this, but there’s just something about it that’s had us watching it on a loop ever since we were reminded of it.

The defender sliding in but not getting a touch, the keeper diving pointlessly despite clearly knowing he’s already been beaten, the player sending in the cross being Roy Keane wearing No.9.

The advertising hoardings behind the goal, the steward throwing his hands up in the air, Sharpe continuing his run but turning to watch the ball hit the back of the net. This is what every goal should look like.

As for the flick itself, why hasn’t someone come up with a name for it yet? It’s not quite a backheel, but just flick definitely doesn’t do it justice. You could add sublime, sumptuous, even impudent as a kicker, sure, but considering kicking a ball with the outside of your boot has got its own name – a trivela – it really is about time we had a term for this kind of finish, too.

Anyway, we digress. Whatever you call it, it’s bloody beautiful and made all the better that it was scored by Sharpe, a man made for the 90s. The drinking, the dancing, the piss-taking – being Lee Sharpe always looked like a lot of fun.

He did, of course, celebrate this particular goal with the Sharpey Shuffle, right in front of those posts to keep the nets tight which are now sadly missing from Old Trafford. Celebrations have never been as good since.

An 80th-minute equaliser in a 2-2 draw, this proved to be Sharpe’s last goal in his last ever game in the Champions League – he was injured when United lost the return leg 4-0 at the Camp Nou – as United lost the title to Blackburn and competed in the UEFA Cup in 1995-96 in Sharpe’s final season before leaving for Leeds United.

As final acts on the biggest stage go, this was a pretty good one. Thanks for the memories, Sharpey.