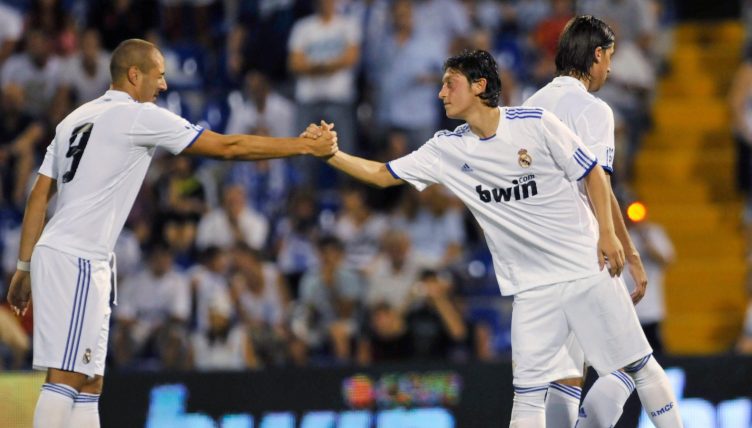 We weren’t kidding ourselves that we’d seen every goal ever scored in our lifetimes, but we’ve only just seen a Mesut Ozil assist from 2010 and now the past 12 years just seem like one big waste of time.

Indeed, we dedicated pretty much an entire article to two ludicrous backheel assists from Guti for Real Madrid in 2006 and 2010.

So believe us when we say we’re scratching our heads to understand how we’d somehow never seen an Ozil backheel assist, also for Real Madrid and also from 2010.

It’s not like it came in a behind-closed-doors friendly, it was in a 4-0 Champions League win over Ajax, yet we were either on some sort of weird break from football that week or it was so filthy our minds had stored it in an X-rated folder never to be seen again.

Either way, given the choice, we’d have watched this every single day since it happened, and now we can’t help but feel everything we’ve done in the intervening decade has been rendered utterly meaningless.

We were probably doing stupid things like working and sleeping when we could have been watching this. To ourselves, we apologise.

To the rest of you, we just hope your minds haven’t been playing the same cruel trick. Even if they haven’t and you’ve been doing exactly what we should have been, watching this every day, here’s your latest chance to marvel at its beauty.

There’s an awful lot to love about this goal. It starts with a long pass from Xabi Alonso, a man with a body shape so remarkably consistent when pinging a long pass that you could replace him with a silhouette and everyone still know who it is – and, because it’s Xabi Alonso, the pass is perfect.

Eyong Enoh has dropped deeper than the rest of the Ajax defenders, thus allowing Ozil the space to run into, but to his credit, he does at least spot the run and follow the German into the box.

Though the defender is the wrong side, the ball is coming over Ozil’s shoulder and in need of an extraordinary first touch and finish to score. Enoh will have felt confident his mistake wasn’t about to be punished.

But he hadn’t planned for what Ozil did next. Then again, had Ozil even planned it? Was this a spur-of-the-moment reaction to the ball landing slightly behind him or had he weighed up his options in those split seconds and decided this was the best course of action?

Either way, it was f*cking genius. The backheel is perfect; Enoh doesn’t know what’s going on, Jan Vertonghen is so taken aback he falls over, even Pedro Leon hadn’t seen it coming.

Karim Benzema didn’t need to; Ozil had somehow cleared a path for him to shoot from just inside the area with only a stricken Vertonghen between him and Maarten Stekelenburg in the Ajax goal. It wasn’t exactly a tap-in, but considering the circumstances of how it had been created, it might as well have been.

If a team-mate does something that sensational to set you up, you simply can’t miss. It’s not allowed. And so Benzema placed it effortlessly into the top corner before running off to celebrate in the opposite direction to Ozil in a classic example of a striker’s selfishness.

While the Frenchman was congratulated at the time, deep down he must have known it was the pass rather than the finish we’d still be talking about 10 years later.

Only after we’d spent the full 12 years having either forgotten or missed it altogether. Still, what a bloody pass.

READ NEXT: The majesty of Mesut Ozil and the tragedy of taking talent for granted

TRY A QUIZ: Can you name Real Madrid’s XI from Karim Benzema’s debut in 2009?