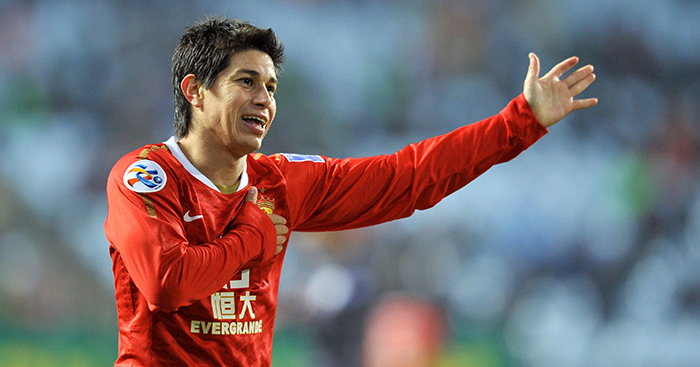 In the summer of 2011, the highest-paid footballers in the world were Cristiano Ronaldo, Lionel Messi and an uncapped Argentine named Darío Conca.

Rewind to the end of the 2010 Campeonato Brasileiro Série A, and Rio de Janeiro club Fluminense is celebrating its first Brazilian championship since 1984.

The team is, by Brazilian league standards at least, filled with household names: international striker Fred leads the line, while Juliano Belletti and Deco, both recently signed from Chelsea, add a touch of prestige to the green, maroon and white shirt.

But the 2010 Brazilian championship has not been won by Fred’s goals or Deco’s creativity alone.

Fluminense’s star player that year has been Argentine midfielder Darío Conca, signed in 2008 from River Plate.

After scoring nine goals in 38 games over the campaign, Conca has been recognised as the league’s Player of the Season.

In fact, so impressive have Conca’s performances been, there are rumours that the midfielder — uncapped for Argentina — might become a naturalised Brazilian in order to play for the Seleção.

Though he seems to have the world at his feet, the player remains cautious.

“It would be difficult for that to happen,” he says. “Mano [Menezes, Brazil’s manager at the time] has great players, and the Brazilian shirt is very important. But if he called me, who knows?”

In half a year’s time, however, Conca’s Brazilian love affair will be dramatically put on hold.

It was on July 2, 2011 that Dario Conca signed a two-and-a-half-year contract with China’s Guangzhou Evergrande in a deal that both surprised and confused the sporting world.

The fee was a reported £7.7million, then a record for the Chinese Super League.

More impressively, Conca’s base salary was reported as being in the region of £170,000 per week, making him the third-highest player in the world.

The numbers were, and remain, mind-boggling. In 2011, the uncapped and largely unknown Conca was pocketing more than Wayne Rooney, Xavi, Andrés Iniesta, Luis Suárez, Diego Forlán, Samuel Eto’o and a host of other stars.

In fact, the only players in the world earning more were Cristiano Ronaldo and Lionel Messi. 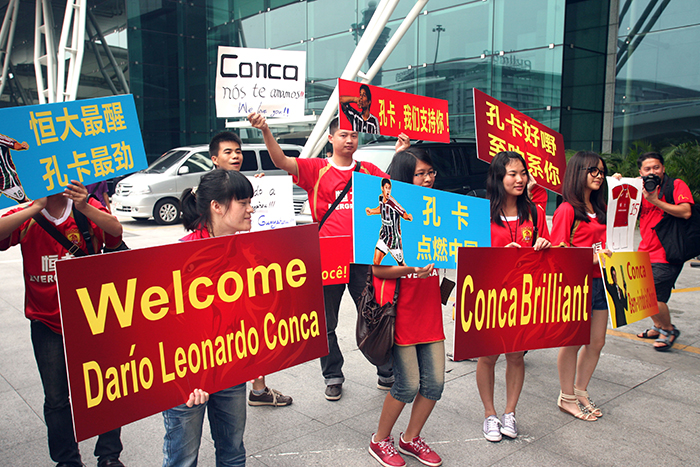 But while football fans looked on bemused, both Fluminense and Conca expressed delight with the bumper deal.

“This is a good offer for the club, and words cannot describe what it represents to Conca,” said Fluminense manager Abel Braga.

And though nobody would have expected Conca to reject the offer, the Argentine justified the move in human terms. “I know it’s a market with less visibility,” he said. “But I made the decision thinking about my family.”

Perhaps surprisingly, Conca adapted to life in China with ease. Over his three seasons with Guangzhou, the midfielder scored 54 goals in 99 appearances, earning him the title of “the king of Tianhe Stadium”.

The club, managed by Marcello Lippi for two of those seasons, won the Super League in each year of Conca’s stay.

To Brazil and back

When his Guangzhou contract expired, a grateful, 30-year-old Conca returned to Fluminense, signing a contract of similar value to his first at the Brazilian club: around £8,000 per week.

Although the midfielder was now playing for pennies, his nine goals helped Fluminense to a sixth-place finish in 2014.

But if it looked as though Conca was heading for a comfortable swan song at his beloved Fluminense, the reality was rather different.

In January 2015, the lure of Chinese riches was again thrust in front of his nose.

Despite being 31 at the time, Conca and his talented agents managed to secure a deal at Shanghai SIPG, then managed by Sven-Goran Eriksson, worth almost as much as the one with Guangzhou, this time around £140,000 per week.

For the mega-rich Chinese club, the deal proved almost sensible as Conca once again took to Chinese football with ease, scoring nine times and assisting a further 13 in his first season in Shanghai and helping the club to a second-place finish.

A cruciate ligament rupture kept an ageing Conca out of the game between August 2016 and May 2017, but — curiously — that injury encouraged Brazilian side Flamengo to sign the Argentine on loan in January 2017.

Just as São Paulo had done with Inter Milan’s Adriano in 2008, Flamengo believed its medical facilities could be used to rehabilitate Conca in a short space of time, ultimately getting them a cheap signing who would be fit to play in a matter of months.

As it happened, Conca was only able to make two substitute appearances in June 2017, playing for a total of 15 minutes.

“The medical staff, the physiotherapists, the dressing room, everyone treated me very well,” Conca said. “I was sad because I wanted to play a little bit more, but, unfortunately [Flamengo manager] Zé Ricardo decided otherwise.”

He returned to Shanghai SIPG in December 2017 but fell out with the club in pre-season and was eventually released in March 2018.

Now 35, Conca has not officially retired, though he has been unattached since leaving the Shanghai club. He recently told Fox Sports that he was playing tennis to keep fit while searching for a new employer.

Despite winning accolades at Fluminense and earning huge sums of money across two spells in China, Conca never did receive a call-up for Argentina (or Brazil).

His place in history is assured, however, as both a financial anomaly and a trendsetter for China-bound South Americans.