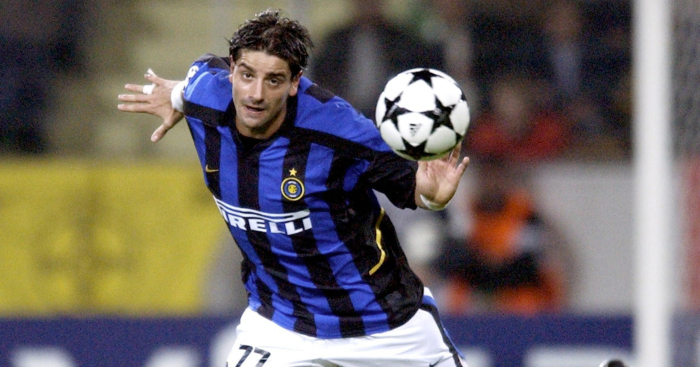 In the late 90s and early 2000s, Italian full-back Francesco Coco appeared the natural successor to Paolo Maldini. Inter even considered him as valuable as Clarence Seedorf.

Francesco Coco once had big ambitions.

Barely content with his role as a defender for AC Milan and Italy, Coco foresaw a life of greater fame and amusement, one in which footballing glory was merged with success off the pitch — on the catwalk, in front of the camera and in the luxurious nightclubs of Milan.

And why not? It was the early 2000s. We had survived the Millennium Bug; David Beckham had married a Spice Girl. Everything seemed possible.

With the face of a model and feet of a champion, Coco seemed as likely as anyone to conquer the two worlds: here, bombing down Milan’s left flank, was the perfect mix of celebrity and sportsman.

Given all that, the former full-back must look back on his career with a hint of disappointment.

So quickly did Coco’s star fade, the former player is now remembered for one main thing — something that is neither football nor show business.

He is known, primarily, for once being considered as valuable as Clarence Seedorf.

In the summer of 2002, a misguided Inter called up city rivals AC Milan and agreed to trade Seedorf, their skilful Dutch playmaker, for Coco.

Not for money; simply an exchange of two bodies no longer needed at their respective teams.

It was one of a handful of pure swap deals in football history, apparently satisfying a need — be that a tactical one or an accounting one — for each of the two Milan clubs.

But while Seedorf became a legend for the Rossoneri, Coco all but disappeared.

By the time Francesco Coco was traded for Clarence Seedorf in 2002, the full-back had enjoyed an exciting early career at Milan, punctuated by loan spells at Vicenza, Torino and, impressively, Barcelona.

But it was the 2000-01 campaign when he truly came to prominence, clocking up more league minutes for Milan than anyone in the team bar Andriy Shevchenko and Paolo Maldini — the legend that Coco was tipped to succeed.

Coco’s style was unusual: a right-footed player at left-back, he was adept in attack and defence, capable of delivering inswinging or outswinging crosses from the left. 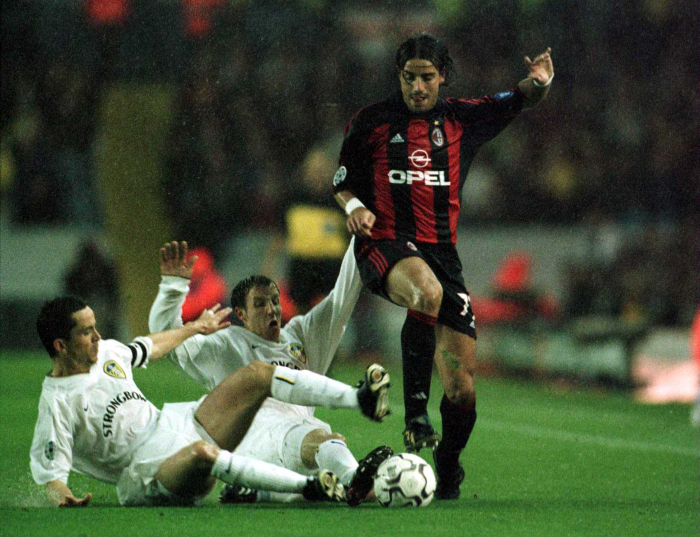 He was also a trendsetter in both football and fashion, preempting today’s craze for lofty squad numbers by wearing 77 on his back.

Whether down to skill or squad number, the defender caught the eye throughout 2000-01.

In October 2000, the full-back made his debut for the national team, where he was tasked with replacing the less flamboyant Gianluca Pessotto. He did so convincingly, earning 17 caps over the next two years.

The 2000-01 season, however, would be Coco’s only season as a regular starter for Milan.

After falling out with manager Fatih Terim at the start of the following campaign, the full-back was sent out on loan to Barcelona. 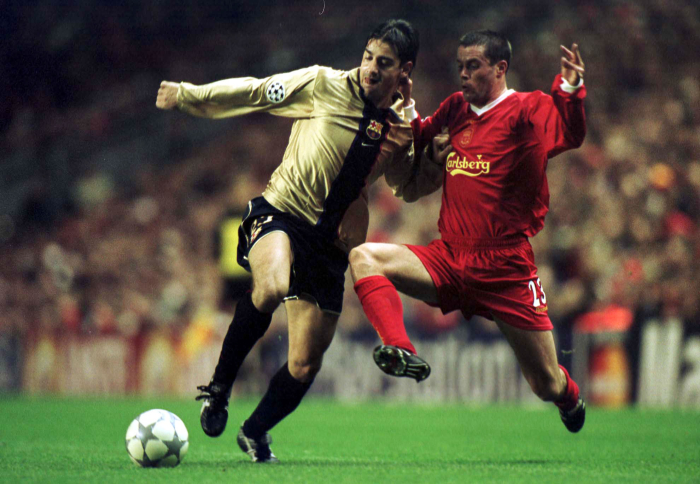 “Part of the blame was with Terim, part with the club and part with me,” Coco would later explain. “But I have gone my own way since then and I have made my choices.”

Though Coco was occasionally dropped in favour of near-namesake Phillip Cocu or Barca captain Sergi, the spell was deemed successful enough to guarantee the full-back a spot in Italy’s 2002 World Cup squad.

Were it not for some out-there refereeing in Korea, Coco might have been a world champion.

Coco’s headline-grabbing swap for Seedorf actually took place just before the World Cup, in late May 2002.

And although the defender had indicated a willingness to extend his stay with Barcelona, Inter were a more-than-acceptable second choice.

“Inter are a great club and I want to do well and it is a chance to return home,” Coco said. “Everything is in place for me to do well.”

In hindsight, the swap seems imbalanced. Inter had paid £20million for Seedorf just two years prior, and — sticking with hindsight for a moment — the Dutchman was clearly the superior talent.

At the time, however, the clubs assigned equal value to their respective assets.

In reality, it was anything but. 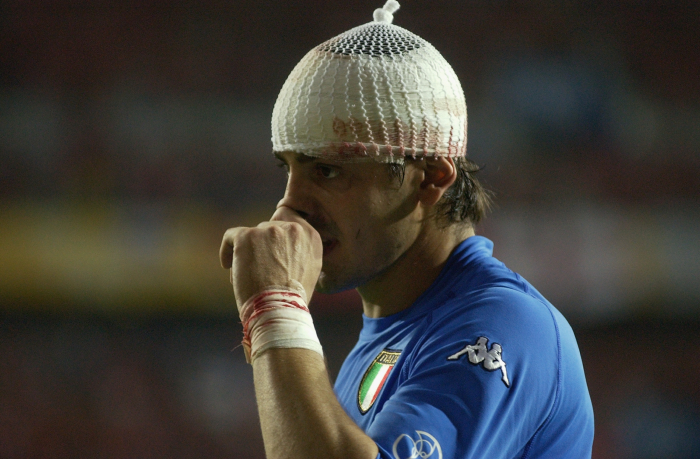 Although Coco’s Inter career got off to a good start — the club recorded seven wins in their opening eight matches — things went awry by November. Three games without a win saw the defender dropped for Giovanni Pasquale, and the left-back spot would prove hard to reclaim.

To make matters worse, a European Championship qualifier versus Azerbaijan in September 2002 would end up being Coco’s last ever international appearance.

At that point, he was just 25 years old.

After the 2002-03 season, Coco barely kicked a ball, featuring irregularly for Inter and only clocking up minutes during a late-career loan spell.

His decline could be attributed to a lack of focus and a broad palette of extra-curricular interests.

“Naturally, women are among my thoughts,” he told Virglio in 2001, before mentioning his fondness for “Latin American dances”.

Around the same time, Forza Milan asked the defender about the last CD he had bought. The answer, ominously, was ‘She Bangs’ by Ricky Martin.

But if Coco’s love of partying was an obstacle in the way of success, major back surgery in 2003 was perhaps a bigger one.

Initially expected to keep him out for a month, the procedure ended up claiming the best part of two seasons.

By the time of his recovery, veteran Giuseppe Favalli was the club’s firmly preferred choice at left-back.

Inter, it seemed, had no place for their playboy. 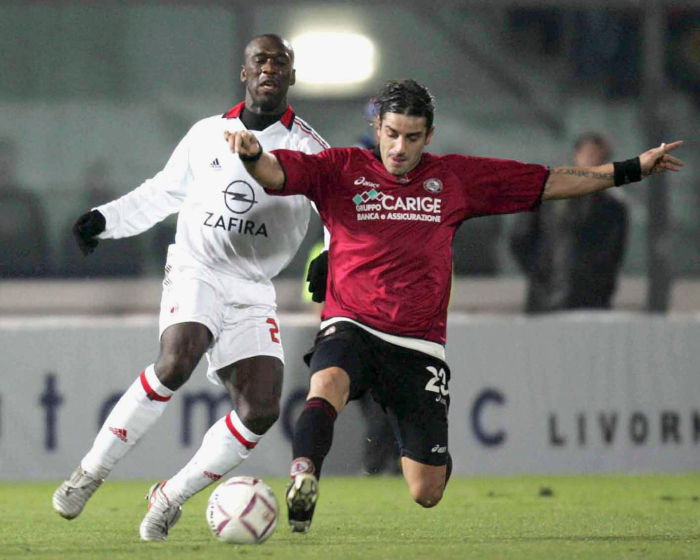 Not that Coco was quite finished with the game. In the summer of 2005, the 28-year-old joined Livorno on loan, where he would enjoy his busiest season since 2001-02, making 28 league appearances and helping his temporary club to a UEFA Cup spot.

“I believed I played well [at Livorno], even if everyone criticised me,” he later told Toro News.

That form convinced Man City to give Coco a trial in January 2007, but the deal was called off when the Italian was found smoking a cigarette before training.

A subsequent loan to Torino was mostly unsuccessful, with the full-back playing just three times.

After having his Inter contract cancelled, Coco hung up his boots in 2007 at the age of 30. It had been a strange career: over 12 years as a professional, his only permanent clubs had been Milan and Inter.

But if the prematurity of that retirement was striking, the player’s motivations for quitting the game were even stranger.

Far from a spent force physically, Coco had received playing offers from the likes of the New York Red Bulls and New England Revolution in MLS over the summer of 2007. A spell in America beckoned.

As it happened, the Italian went there for very different reasons.

“I have been thinking about this for a while now and it is a reasoned decision not made on the spur of the moment,” Coco said. “This summer I left the door open to football and I got offers, but I think that the right moment has arrived for me to change my way.”

Coco’s decision to become an actor wasn’t totally out of the blue: the footballer had enjoyed screen time earlier in 2007 while appearing on the Italian version of Celebrity Love Island. (He left the show voluntarily after four weeks.)

Sadly, the new career failed to materialise, and Coco has since worked in punditry, fashion and real estate.

Coco’s footballing achievements may pale in comparison to Seedorf’s, but in a battle of off-pitch extravagance, the Italian wins hands down.