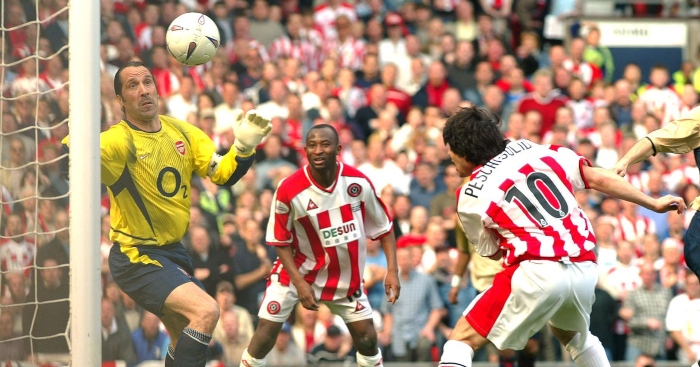 Arsenal and Sheffield United didn’t play each other all that much around the turn of the century, but when they did it was always worth the wait.

When two teams are drawn together with regularity in cup competitions, it can create a mini rivalry more intense than any other. We saw it with Liverpool v Chelsea in the Champions League, but for a while Arsenal and Sheffield United ran them close.

It went to show that teams didn’t need to be on equal footing to provide some compelling encounters: Arsenal were embroiled in a number of title challenges, the Blades were mostly a full division below, yet the pair played out battles more hard-fought than a number of top-flight rivals.

Arsenal and Sheffield United were drawn together just three times between 1999 and 2005, but that made for five games, with the first of the quintet setting the tone.

The Gunners’ FA Cup defence hadn’t got off to the most illustrious of starts, with Arsène Wenger’s side needing to overcome a 2-0 deficit at Preston to make it through to the third round and scraping past Wolves at Molineux.

The fifth round brought another second-tier opponent in Sheffield United, and with less than 15 minutes remaining at Highbury the scores were level. Cue visiting goalkeeper Alan Kelly putting the ball out for an injury and Ray Parlour trying to return it, only for debutant Kanu and Marc Overmars to conspire to put the ball in the United net.

In an unprecedented move, Wenger offered to replay the entire game after Overmars’ goal gave the hosts a 2-1 win. Blades boss Steve Bruce accepted, but his side fell to defeat by the same score.

“The important word that comes to mind is respect for the spirit of football. Without that there is no game anymore,” Wenger said, earning him plenty of plaudits, even if Bruce might have preferred to have earned the original draw to set up a replay at Bramall Lane.

The season ended in disappointment for both sides, with Arsenal losing their semi-final to Manchester United and Sheffield United missing out on a play-off spot despite a late rally.

Of course, when teams are separated by a division, you have to wait longer for a shot at vengeance. Thankfully for Sheffield United, the wait was only four years, but the downside was that Arsenal had got even better in the interim. Wenger had added a second league title while the Yorkshire club had pretty much stood still.

In 2003, though, things were looking a little better. The Blades, with Neil Warnock in the dugout and exciting youngster Michael Tonge slotting in alongside Michael Brown in midfield, had already reached the League Cup semis when they faced Arsenal at the same stage of the FA Cup.

However, when the full-time whistle blew at Old Trafford, some of the fans probably wished they hadn’t bothered.

It was a real lesson in it not being your day, with referee Graham Poll inadvertently getting in the way of the second-tier club in the build-up to Freddie Ljungberg’s winner and David Seaman pulling off a once-in-a-lifetime save to deny Paul Peschisolido.

Any other day, at least one of the two incidents would have surely gone the Blades’ way, and who knows what they might have been capable of if the game had reached extra-time.

Back in 1999, the hero-villain contrast wasn’t really clear-cut enough. Neither side was necessarily evil, with even the injustice put down to a simple misunderstanding. In 2003, though, there was no room for nuance whatsoever.

“I think he should be banned,” Warnock said of Poll, who collided with Tonge in the lead-up to Ljungberg’s goal. “I just cannot accept that they should go on to the next game without being punished when they make such unbelievable errors and nothing is said, it’s just soul destroying.”

Worse still, Arsenal went on to beat Southampton in the final, further accentuating Warnock’s feeling of “that should have been us”.

It wasn’t the Warnock we know now, the ‘get Brexit done’ character who has descended into self parody. This was the righteous anger of the underdog cheated out of his moment, as he saw it, and a lot of neutrals were on his side. It wasn’t out of any love for the beautiful game; it was just what happens when a team becomes dominant enough that people lend their support to variety.

The injustice only added to that, especially given the events of 1999, but United would get another chance two years later.

By 2005, it felt as if the tension had been bottled up to the point it was all unleashed in one go, and a feisty FA Cup fifth round game saw tackles fly in from everywhere.

It wasn’t found wanting when it came to high drama, either: a final minute handball from Philippe Senderos allowed Andy Gray to level from the penalty spot, ensuring yet another 90 minutes between the two sides.

Yet again, though, Warnock’s men fell short, falling to a penalty shoot-out defeat after a goalless draw back at Bramall Lane.

So, that was it, right? Not quite. A year on from that penalty setback, Sheffield United won promotion to the Premier League with a second-place finish in the Championship.

There will have been plenty of games for the fans to look forward to, but many will have been especially keen to see Warnock and his charges welcome Arsenal to Yorkshire.

The early-season meeting at the Emirates Stadium didn’t exactly go according to the plan, with an hour’s defensive solidity followed by three Arsenal goals in the final 30 minutes, but revenge – when it arrived in December – was extremely sweet.

Warnock’s team sat 17th in the league while the Gunners had ridden an unbeaten start at their new stadium to sit third. Bramall Lane became the precursor to those wet Wednesdays in Stoke which would later be used as shorthand for games Wenger’s charges simply weren’t able to navigate in the same way. Even the red and white stripes matched, to the point that if you absorbed the game into that particular canon people couldn’t have had too many complaints.

The opener came from the sort of moment which would come to define Arsenal’s unlikely defeats in the years following their 2004 title win, with Jens Lehmann racing from his line and Christian Nade beating him to the loose ball to slide home from the edge of the box.

Sheffield United had done what they didn’t manage in any of those other games – take the lead – but things weren’t going to be easy.

Throughout the 2006-07 season (and much of the promotion campaign), Warnock had opted against naming a substitute goalkeeper on the grounds that centre-back Phil Jagielka was just as good as a specialist between the sticks. He had stepped in before, helping secure victory at Millwall in 2004, and there’s no doubting he was better in goal than your average outfielder.

Still, while the manager may have been confident in his defender’s abilities, he might have preferred not to see him put to the test against one of the league’s most dangerous attacks. And certainly not for a full half-hour after Paddy Kenny was forced off injured.

Of course, as we know now, there was nothing to worry about. Jagielka made save after save, keeping the likes of Robin van Persie and Júlio Baptista at bay, and Sheffield United held on for a famous win.

When Sheffield United welcome Arsenal to Bramall Lane on Monday, just six points will separate the teams at kick-off, compared to 16 back in 2006.

Despite the form of Pierre-Emerick Aubameyang and the London club’s unbeaten run since their defeat to Liverpool, the Blades will feel they have every chance of earning a result. After all, they’ve done more to bridge much bigger gaps in the past.

They’ll just hope they don’t have to stick Phil Jagielka in goal again.