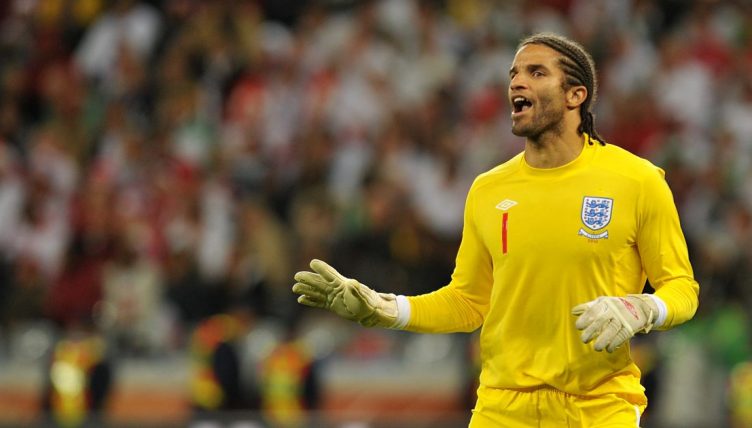 In 2014, a 44-year-old David James became player-manager of Kerala Blasters for the inaugural season of the Indian Super League. It was no calamity.

You probably remember ‘late period’ David James as the man who won an FA Cup with Portsmouth in 2008 and replaced poor Rob Green at the 2010 World Cup.

Years later, however, after spells with Bristol City and Bournemouth and then in Iceland under former team-mate Herman Hreidarsson, James became player-manager of Kerala Blasters, a brand-new team competing in the first ever Indian Super League.

But there was an extra level of celebrity around James’ Kerala Blasters, whose owner was cricketing legend and national icon Sachin Tendulkar.

Between October and December 2014, James oversaw 17 matches for the Indian side, playing in 12 of them. And while he didn’t pick up any silverware in the southern hemisphere, his performances at the age of 44 were nothing short of miraculous.

When James arrived in Kerala, it was a time of new experiences for the veteran: his first management role, and his first time setting foot in India.

“Five to six weeks ago, I had a conversation with Sachin Tendulkar,” James told the Times of India in August 2014. “He told me his view, plan, dreams for Indian football. What a wonderful man.

“I am not the biggest cricket fan in the world, so I am not coming to India to see Sachin the cricketer but the football fan. We had coffee and spoke a little about cricket and lots about football.”

Shortly after James’ arrival, the club picked its preferred international players during the ISL’s international draft. These included then-30-year-old former Newcastle and Sunderland striker Michael Chopra, whom the Blasters obtained for £35,000.

Chopra committed himself wholeheartedly to Indian football, even stating his willingness to renounce his British citizenship in order to play internationally for India.

“I want to be part of the legend of Sachin Tendulkar,” Chopra told the BBC Asian Network. “Everyone knows him because of how well he’s done in cricket and hopefully I can follow in his footsteps in football.”

The Blasters then made a smattering of non-draft signings, including two of James’ former Bristol City team-mates, Scotsmen Jamie McAllister and Stephen Pearson.

The squad wasn’t as star-studded as some of the other ISL rosters, but there was a positive mood around the club.

The opening game of the ISL saw the Blasters gone for a duck, as they lost 1-0 away to NorthEast United, and this was followed by defeat a week later to southern rivals Chennaiyin FC, sending the Blasters bottom of the league.

There were some eyebrow-raising moments off the pitch too. In early October, the club unveiled new signing Duleep Menon, who had faced the Blasters in a pre-season friendly while playing for an amateur side.

“He is my boy, I brought him in,” explained Tendulkar.

For his part, Menon said he had “tears in his eyes” when meeting Tendulkar and that it felt “like a dream”. But the player would ultimately never appear for his new club, presumably adding to the dreamlike nature of the experience.

On October 30, however, the Blasters’ luck began to change. Despite conceding a goal to captain David Trezeguet (aged 37), the Blasters overcame Pune City to claim their first ever ISL victory.

A 2-1 win over Atletico de Kolkata in the next match temporarily put the Blasters top of the division. Their excellent run of form was eventually ended with a 3-0 defeat to FC Goa, during which James went viral for kicking the net in frustration.

There was a sad backstory going on too. Just as the Blasters reached the summit of the ISL in late November, James was going through a personal ordeal.

Having declared bankruptcy in May, he was forced to auction off a trove of football memorabilia, including the shirt he wore (on the bench) during England’s redemptive victory over Argentina at the 2002 World Cup.

The greatest match in history

Come the conclusion of the regular season, in which James kept five clean sheets in 11 appearances, the Blasters were fourth, scraping into the play-offs by a single point.

That set up a semi-final clash against rivals Chennaiyin, managed by Italian World Cup winner Marco Materazzi and boasting a genuinely fascinating squad.

James, having picked up an injury at the end of the regular season, had to orchestrate things from the touchline.

In the first leg, the Blasters cruised to a 3-0 home victory. The second leg, however, was probably the greatest game of football ever played.

Materazzi set out his Chennaiyin XI thus: in central defence, a pairing of Mikael Silvestre (37) and Alessandro Nesta (38); ahead of them Eric Djemba-Djemba (33) as the midfield anchor; Materazzi himself (41) in an advanced central midfield role; and former France, PSG and Hull City full-back Bernard Mendy (33) as a right-sided forward.

Wary of the Chennaiyin firepower, James set out his own side to defend, but that decision backfired when full-back Jamie McAllister was booked for timewasting after just eight minutes. The Scot was duly sent off in the 28th minute after fouling Mendy, putting James’ side in a very awkward position.

And things went from bad to worse just before half-time when the six-foot-four Materazzi assumed set-piece duties and sailed in a cross for Silvestre to head home.

Despite Materazzi shanking a penalty wide early in the second half, Chennaiyin kept pressing the Blasters. The introduction of mercurial former Manchester City playmaker Elano put the home side in even greater control, and an ugly own-goal by Kerala’s Sandesh Jhingan made it 3-2 on aggregate.

After holding out for so long, Blasters hearts were broken when Chennaiyin equalised in the 90th minute.

It can be tempting to view the ISL as a glorified Masters Football tournament, packed with very old celebrity players looking for a bit of fun at the end of their careers.

And one has to wonder whether Materazzi succumbed to that temptation.

Playing at 41 is admirable, but playing yourself, a lumbering centre-back, in midfield while Elano starts on the bench… putting yourself on penalties because you’re the manager… these decisions have more than a hint of self-indulgence about them.

James, on the other hand, appeared to apply himself to the job with total seriousness. For example, he never picked himself as a forward, despite having some experience in the role.

And those differences in attitude proved pivotal as the semi-final went to extra time.

In the 102nd minute, knackered midfielder Materazzi was booked for a late tackle, and then picked up a second booking just two minutes later, making it 10 against 10.

The numerical parity helped the Blasters back into the game, and with just three minutes left, 32-year-old Stephen Pearson slotted home to win it for James’ side. It was a euphoric moment for the Blasters, as Pearson swung the yellow shirt around his head — and, to date, it remains the high point of James’ managerial career.

In a coincidental nod to veteran English goalkeepers, Chennaiyin’s crestfallen keeper on the night was named Shilton Paul.

There would be no fairytale ending for the 44-year-old James though. In the final against Atletico de Kolkata, with the manager naming himself back in the starting XI, the Blasters succumbed to a 1-0 defeat in the fifth minute of second-half stoppage time — virtually the last attack of the game.

On the whole, James’ 2014 player-manager stint — if not his later managerial stint in 2018 — can be deemed a massive success.

Of the eight ‘marquee’ players, the England ‘keeper was probably the least glamorous, yet his defensively solid team finished ahead of Alessandro Del Piero and David Trezeguet’s respective teams.

Consistency, composure – and not a hint of calamity.