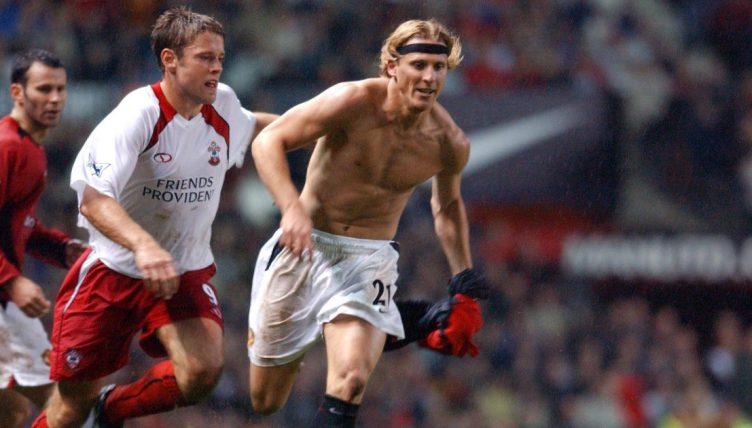 Forlan infamously endured an agonising goal drought after his arrival in January 2002, failing to score in his first 23 Premier League games.

His effort and work rate may have endeared him to the United fans, but he just couldn’t put the ball into the back of the net, leading to him oh-so-hilariously being dubbed ‘Diego Forlorn’ by the British press.

“Goals made me happy and I was never happy until I scored, so there were frustrations in Manchester,” Forlan told The Athletic in December 2019.

The striker finally broke his Premier League duck with a late equaliser against Aston Villa in October 2002, much to the relief of everyone inside Old Trafford.

Fortunately for Forlan, the wait for his next league goal was not nine months, but seven days.

Despite scoring against Villa, he started on the bench against Southampton and was called into action in the 79th minute with the scores tied at 1-1.

The Uruguay international had been on the pitch only six minutes when he picked up the ball outside the area and fired a dipping shot past the goalkeeper.

Veron ➡️ Forlan ➡️ Back of the net ☄️

While we all dream of being footballers, it’s hard to actually comprehend what is going through a player’s head when they score in front of 75,000 people.

Overcome by emotion and perhaps relief, Forlan whipped his shirt off in celebration before dashing to the corner of the ground.

The striker may have temporarily silenced his doubters, but he now faced a different and more difficult challenge. Getting his shirt back on.

United’s new Nike jerseys that season had integrated base layers and their No.21 struggled to get it back over his head.

By the time of the restart, Forlan still hadn’t managed to put his shirt back on and spent the next minute running around the pitch half-naked, like a teenager playing skins in the park.

He even managed to tackle James Beattie with his shirt still in his hand, but the comical scene just typified Forlan’s commitment to the team.

Forlan was eventually forced to come off the pitch and got his shirt back on with the aid of three backroom staff as United held on for the win.

“The goal that I scored on Saturday was one of the best ones that I have done in my career,” Forlan said after the game.

“First of all because I was on the pitch for only a few minutes, second because it was a nice goal and third because it gave victory to my team.

“The only problem that I had with my celebration was that I took my jersey off and then I couldn’t get back on. I wanted to do it but I had to keep on playing and I couldn’t get it on.”

But the professional killjoys at FIFA clearly failed to see the funny side, imposing the rule to sanction any player who takes off their shirt during a goal celebration in the wake of this incident.

Forlan may not have been a prolific goalscorer for United like team-mates Ruud van Nistelrooy and Ole Gunnar Solskjaer, but iconic moments like this only helped cement his cult hero status at Old Trafford.