When Gjorgji Hristov took on the women of Barnsley – and lost 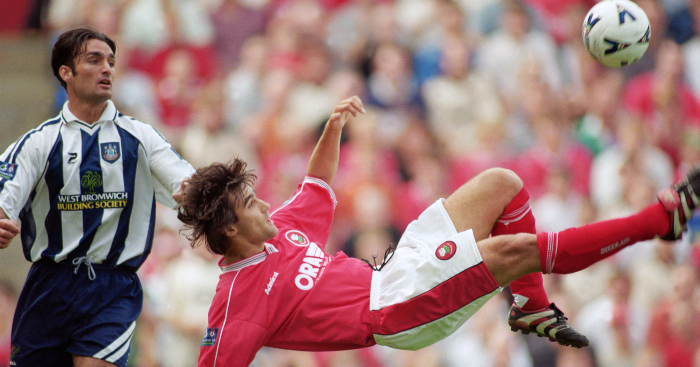 To this day, Hristov remains Barnsley’s most expensive player ever, a forward who proved costly to the club in every sense of the word.

Not that the Tykes could have possibly known at the time, of course. On the face of it, the Macedonian appeared an ideal signing to spearhead Barnsley’s maiden top-flight season.

Hristov had already made quite the impact, winning back-to-back league titles with Partizan and starring for his national side in a shock 3-2 win over Mick McCarthy’s Republic of Ireland.

The 21-year-old bagged the winner with an exceptional strike that put Macedonia on course for one of their most famous victories – and put him on course for a move to the Premier League.

Within two months, he was on his way to Yorkshire after Barnsley manager Danny Wilson won the race to sign him amid competition from several Serie A sides.

Barnsley fans had every reason to feel excited about the new arrival too. Just two seasons earlier, newly-promoted Bolton had snapped up another rising star at Partizan Belgrade for an identical £1.5million.

Sasa Curcic might not have prevented the Trotters from going down, but he provided many memorable moments during his one season at the club and his sale had helped to bankroll their immediate return.

Hristov in the making

Initially, it looked like Hristov might do the same, scoring the winner against Bolton, of all teams, on his first start. A well-taken header, the goal sealed Barnsley’s first Premier League home win and secured Hristov a unique place in the club’s history.

It ultimately proved a false dawn, however. Barnsley had already defied the odds to earn promotion and, though they played with plenty of pride and passion, the Tykes struggled against Premier League opposition.

That 2-1 victory over Bolton was followed by a wretched run of six straight defeats in which they shipped an eye-watering 19 goals during that time. Though a 2-0 win over Coventry provided respite, it was quickly followed up by a 7-0 thumping at the hands of Manchester United. 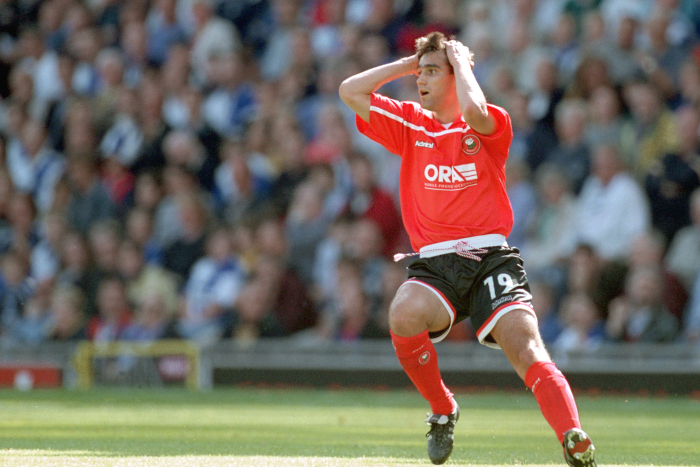 Meanwhile, Hristov was cutting an increasingly peripheral figure, failing to find the back of the net again and rarely, if ever, completing a full 90 minutes under Wilson.

Already deep in the relegation mire, Barnsley and Hristov did provide a little Boxing Day cheer once again against Bolton, as he finally ended his 10-game goal drought in the league.

Bolton ultimately levelled through a spectacular Gudni Bergsson strike, but Hristov’s hoodoo had been lifted, and the forward was able to go into the New Year with a fresh sense of optimism.

But it didn’t last. In early January a story broke that was about to make Hristov headline news for all the wrong reasons.

‘The local girls are far uglier’

Homesick and apparently unhappy with life in South Yorkshire, Hristov gave an interview to a Belgrade sports magazine in which he complained he was finding it hard to settle at his new club.

He attributed his inability to settle down to the fact he was struggling to get a girlfriend because, as he saw it, erm, the local women of Barnsley were not pretty and drank too much.

“I’m finding it difficult to find a girlfriend in Barnsley, or indeed settle into a decent way of life,” Hristov said. “The local girls are far uglier than the ones back in Belgrade or Skopje, the capital of Macedonia, where I come from.

“Our women are much prettier. Besides, they don’t drink as much beer as the Barnsley girls which is something I don’t like at all.

“England is a strange country and I found it hard to adapt to living here. The main thing is that I am not on my own. To be honest I expected more of Barnsley as a town and a club.”

“The local girls are far uglier than the ones back in Belgrade or Skopje, the capital of Macedonia where I come from.

“Our women are much prettier. Besides, they don’t drink as much beer as the Barnsley girls which is something I don’t like at all.” pic.twitter.com/awFcaZ39J7

It wasn’t so much the remarks about Yorkshire life that rankled – Hristo Stoichkov and the Bulgaria squad had voiced similar complaints about their team base in Scarborough during Euro ‘96 – but more the comments about the women of Barnsley.

Club chairman John Dennis immediately went into damage limitation mode. “Just after Gjorgji had arrived in Barnsley six months ago, he had an interview with a freelance reporter from over there [Yugoslavia] in which it was asked if he was happy in England.

“He said at the time he missed all his friends, family and girlfriend. It seems a journalist somewhere has seen this old article and exaggerated it beyond all recognition.”

However, by then the media had caught wind of the story and were only too happy to grant the women of Barnsley a right to reply.

Local student Michelle Dodson was among those to hit back, telling the BBC: “Barnsley women are the best looking in the country.”

Dodson added: “My reaction to his remarks is unprintable. He wants to look in the mirror before talking about us. He’s no oil painting.”

Melanie Dixon explained to The Independent that the problem most likely lays with the Hristov: “I think it is a disgusting thing to say and he wants to get a life. I would tell him to get himself a life if I saw him. There must be something wrong with him if he is pulling people down.”

Sarah Scholey went even further: “It is not on. There are pretty women in Barnsley. He is sad, he wants to get a life. I would give him a good slap. There are some ugly women but it is not right to be saying it.”

In another surprise development, Donna Carman and Tina Powers, two members of staff at O’Neill’s Bar in Barnsley, even decided to host a ‘Miss Barnsley’ beauty contest with Hristov invited to select the winner. The late 1990s was a very different time in gender relations.

“Barnsley women are very outgoing,” Carman told The Independent. “There are plenty of good-looking ones coming in here. They go out once or twice a week to enjoy themselves and forget about the woes of the week.”

PR stunt or otherwise, Hristov ended up attending the resulting contest with club chiefs evidently keen to control the narrative by offering the winner the chance to appear in a photoshoot at Oakwell.

Everything was under control. Or so they thought.

The Van Basten of South Yorkshire

While Hristov’s ill-advised interview in Belgrade had gone down like a lead balloon among the people of Barnsley, the reaction was surely just as bad behind-the-scenes at the club.

Though the Macedonian started Barnsley’s first game of the new year – a 6-0 thrashing at the hands of West Ham – he missed their next six league fixtures, serving as an unused substitute in five.

Something was clearly amiss, whether it was a loss of form or a lack of interest on Hristov’s part. He eventually returned in late March, making an almost immediate impact in what proved to be the best spell of his ill-fated Barnsley career.

While Wilson’s team continued to leak goals, they were beginning to make a decent fist of fighting their way out of relegation and it suddenly looked like Hristov could play a part.

Brought on with Barnsley trailing 2-1 to Liverpool, Hristov set up team-mate Neal Redfearn for a late equaliser. Though it was eventually cancelled out by a 90th-minute Steve McManaman goal, the assist was enough to see Hristov earn a start next time out against Blackburn, where he repaid his manager’s faith with another goal in a 2-1 loss.

Nevertheless, a few days later the young striker repeated the feat with arguably his best goal for the club, a delicate volley against Leeds that remains a firm favourite among Barnsley fans to this day.

This was the Hristov for whom Barnsley had shelled out a club-record fee; this was the forward the Yorkshire club had been crying out for. But just when it seemed like he had turned a corner, everything went wrong.

The joy of his goal against Leeds turned to misery when, on 89 minutes, he was sent off, earning a suspension that ruled him out of much of the crucial run-in.

Forced to watch on while Barnsley’s relegation was confirmed, Hristov then suffered further humiliation when The Mirror ran an explosive kiss-and-tell story revealing he’d had a ‘torrid three-month affair’ with none other than the winner of the Miss Barnsley competition.

Like the old commentator cliche goes, you couldn’t write it.

Eye on the ball

Tina Powers was one of 12 women selected to compete in the event which was, rather bizarrely, broadcast on GMTV. Powers was the standout star though, quipping to the judges: “Gjorgji should concentrate more on scoring goals than with women.”

Evidently impressed, Hristov asked Powers out during their subsequent photoshoot together at Oakwell. A three-month romance followed before things turned sour.

Powers accused Hristov of cavorting with another woman in a local nightclub and even told the press he had asked her to keep the affair secret because he had a fiance back home in Macedonia.

When confronted with the claims, Hristov did little to deny them, claiming in broken English that he had enjoyed dalliances with multiple women and admitting he did, indeed, have a fiance back home.

Though he put on a brave face, the incident did little to endear him to the powers that be at Barnsley or the club’s fans, many of whom noted the fact the tryst occurred around the same time Hristov was out of the team at the start of the year.

Hristov, also bristled at the intrusion into his private life, telling The Mirror: “I do not know why people in Barnsley keep saying, ‘What Gjorgji doing? Where Gjorgji now?’”

He didn’t know it at the time, but the women of Barnsley had ended up having the last laugh.

His final Premier League appearance came in a 2-0 defeat to a much-changed Manchester United on the final day. There would be no final flourish.

Though Hristov remained on the books at Barnsley for a further two seasons, a series of knee injuries ensured he rarely turned out for the first team.

He eventually headed to Holland in 2000, joining NEC Nijmegen, where his form did improve, before embarking on a nomadic career that included spells in Scotland, Israel, Hungry, Greece, Cyprus, Azerbaijan and Finland.

Even so, back in his homeland, he remains famous as the first Macedonian to play and score in the Premier League. Unfortunately, in England, he’ll always be remembered as the man who took on the women of Barnsley and lost. Badly.