Let’s just start with a confession: Joe Cole playing on loan at Lille alongside Eden Hazard and Dimitri Payet is about as close to a football wet dream you can possibly get for me.

There’s just something about those kind of players – fat-arsed attacking midfielders who really can’t be f*cked tracking back if we’re being honest, gaffer. On a good day they play the game with an ease few others have ever reached. On a bad day they prompt weirdos on Twitter to post pictures of their heat maps and tackling statistics.

In 2011-12, reigning Ligue 1 champions Lille decided they wanted not one, not two, but three of those players.

Eden Hazard had propelled them to the title the previous season, winning Player of the Year as they finished eight points ahead of Marseille. And manager Rudi Garcia decided to give the prodigious Belgian some help, signing Dimitri Payet from Saint-Etienne for €9million and bringing in Joe Cole on loan from Liverpool.

Cole had lasted just a solitary season at Anfield following a disastrous free transfer from Chelsea. After establishing himself as one of England’s most alluring players at Stamford Bridge, serious injuries had badly affected his performances and his Liverpool career never recovered from being sent off 45 minutes into his league debut against Arsenal – despite Steven Gerrard claiming: “Messi can do some amazing things, but anything he can do Joe can do as well, if not better.”

A move to France offered Cole the chance of a fresh start. He was still only 29, and it was only a year after he had played for England at the 2010 World Cup, a tournament in which John Terry pleaded with Fabio Capello – ultimately unsuccessfully – to find a place in his starting XI for Cole.

“I love football, I love watching it, I love talking about it,” Cole said upon his move to Lille. “This is a great experience and a challenge to play for a team who wants to progress. This seems a very positive place.”

There was, however, a slight problem. Cole had been told by his agent he would play No.10 for his new club. After meeting with his new manager, Garcia made it clear that role belonged to Hazard. Penalties? Hazard also looked after them. Free-kicks? They were part of Hazard’s job too.

Cole was nine years Hazard’s senior, yet it was clear who was the main man at Lille.

This perhaps worked in Cole’s favour. He had carried the weight of unrealistic expectations with both Liverpool and England over the past 12 months. In Hazard, he had a 20-year-old brimming with youthful exuberance unburdened by the rigours of a life in elite football to take the lead.

Lille started the season slowly, drawing with Nancy and losing at home to Montpellier in their first four Ligue 1 fixtures, with the latter ultimately going on to take their title.

They were heading for another dispiriting draw against Saint-Etienne when Cole was introduced off the bench for his debut in place of Payet. Cole came on in the 65th minute with the score locked at 1-1; within eight minutes, Hazard had put Lille in front, and his new team-mate then came to the fore to seal all three points.

After collecting the ball 40 yards from the hosts’ goal, a poor touch forced Cole to twist away from his marker, and he proceeded to dribble past three more defenders before his pull back allowed Ludovic Obraniak to score.

This couldn’t have been more far removed from the Liverpool Cole. This was West Ham Cole; the player Sven Goran Eriksson deemed “full of fantasy”, the cheeky lad from Camden plucked from the playground and dropped onto a pitch surrounded by professional footballers taking the game far too seriously.

Happy retirement Joe Cole. I'll never forget you slaloming through the Saint-Etienne defence on your Lille debut and momentarily threatening to become the best English player in Ligue 1 since Chris Waddle pic.twitter.com/9tMIeYrSFl

In the following match, Cole registered another assist as he linked up with Hazard, who grabbed the equaliser in a 1-1 draw at Bordeaux.

Exactly two weeks after his debut, Cole opened his own account in spectacular style, rifling the ball into the top corner from 25 yards with a shot that goalkeeper Fabien Audard quickly gave up any hope of trying to stop.

Come October, Cole couldn’t have appeared further away from the beleaguered figure he cut in his final year in England prior to the loan move. In an interview with The Guardian, conducted while he sat drinking an espresso outside a cafe in the city centre, the man who struggled to settle in the north of England spoke romantically about his new life in the north of France.

“When I can, I’ve been doing this: sitting in cafes, flicking through L’Equipe. I’ve been trying to immerse myself in the culture. I’ve just stopped short of putting a beret on and a string of onions round my neck.

“This is a beautiful city. I didn’t know what to expect, but life is good. There’s a saying here: ‘When you arrive in the north of France, you cry. But when you leave, you cry even more.’ People fall in love with the place and its sense of community. It just feels right.”

His encouraging form on the pitch undoubtedly helped him adapt off it. Payet, however, did not adjust quite so quickly. Due to Cole’s early form, Payet was in and out of the side and spent a prolonged period on the bench around December.

In Garcia, he thankfully had a manager who encouraged his roguish nature, urging the attacker to play with freedom.

“I’m asking him to do different things to Saint-Etienne,” Garcia acknowleged. “It’s logical that it takes time. The competition should push him to excel. Dimitri must display confidence, he must let go.”

By March, things clicked into place for Payet as he scored in three consecutive games while clearly relishing the chance to play alongside Hazard, who was cementing his reputation as the best player in France by reaching the 20-goal mark for the first – and to date only – time in his career.

Hazard also set a new Ligue 1 record for assists with 16, a record Payet himself later matched at Marseille.

Intriguingly, in that season at Lille, the Frenchmen actually averaged more chances created per 90 minutes than Hazard. 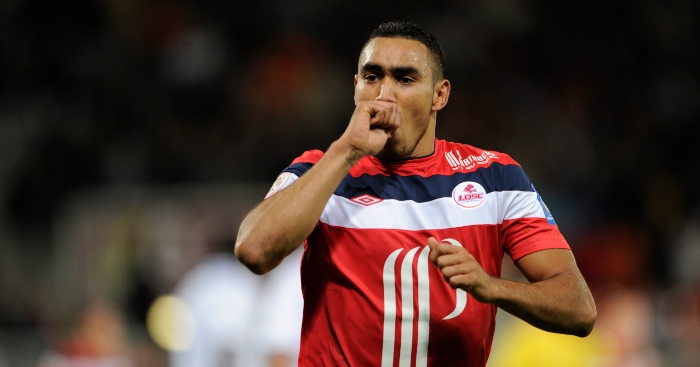 “It is interesting when he is in close proximity to Eden because they get along well on and off the field,” Garcia said. “The potential was there, we knew that. But beyond that there was a real confidence problem with him. The difference is that he is now full of confidence.”

The only regret – from a purely personal point of view – of Cole’s season at Lille is that Garcia’s 4-3-3 formation was unable to accomodate the Englishman in the same starting XI as Payet and Hazard. More often than not, Cole came off the bench to replace Payet or vice versa.

Garcia’s reluctance to field all three in the same starting XI was justified by the results when he did try to fit them all into the same team, although it was undoubtedly just as fun as hoped for the neutral.

While the initial experiment resulted in two 0-0 draws against Evian and Trabzonspor in a Champions League dead rubber, every other game featured at least four goals, starting with a crazy 4-4 draw with Nice in December in which both Cole and Hazard were on the scoresheet.

The trio did not start another game together until April, when Payet struck only for Lille to lose 3-1 at strugglers Brest. Yet Garcia stuck with the tactic for another week and was rewarded as Cole and Hazard once again scored in a 4-1 win against Ajaccio.

With Champions League qualification already secured, the trio were deployed on the final day of the season in what turned out to be both Hazard and Cole’s final appearances for the club. They signed off in style with a 4-1 victory against Nancy as Hazard grabbed a hat-trick in circumstances befitting of his joie de vivre.

Eden Hazard puts Lille 1-0 up against Nancy on his farewell appearance, finishing from Joe Cole's pass to claim 18th league goal of season.

Recounting the match four years later, midfielder Rio Mavuba revealed: “It was Eden Hazard’s last match with Lille and he wanted to organise a little something.

“We decided to have a little drink. A little drink that dragged on somewhat. The following morning, Eden was still drunk. That evening against Nancy, not even with 30 minutes played, Eden had already bagged a hat-trick.

“The guy had not even slept, he drank for the entire night and he put away a hat-trick in 30 minutes. We all looked at each other, we told ourselves that this guy was the real deal.”

While the trio’s Summer of Love proved fleeting, their lives continued to cross paths, with both Hazard and Payet crediting Cole for persuading them to move to England.

“I spoke to him before I signed for Chelsea,” Hazard told the club’s official website in 2018. “Every day, seriously, he was telling me that Chelsea was the best club for me.

“He said Chelsea was a big club where you can win trophies every season. For that reason I signed, so thank you, Joe Cole!”

Payet, meanwhile, told FourFourTwo in 2016: “I was lucky enough to play with Joe Cole at Lille. When he talked about West Ham you could tell he was speaking from the heart.

“It was obvious how much he loved the club. He would talk about how passionate the supporters are, so it wasn’t a complete step into the unknown when I moved here.”

It seems only right that Cole, Hazard and Payet spent a single season playing together at that exact period in their respective careers. You can have too much of a good thing, and their flashes of brilliance in each other’s company were always much more enticing than if they had made the required sacrifices in their games to target a sustained run of dominance.

That season may ultimately have had only a faint bearing on the legacies that were to follow for Hazard and Payet at Chelsea and West Ham, and it will hardly go down in Lille’s record books, but in my imagination it will always be perfect.