An ode to a young Michael Owen, once England’s most exciting player 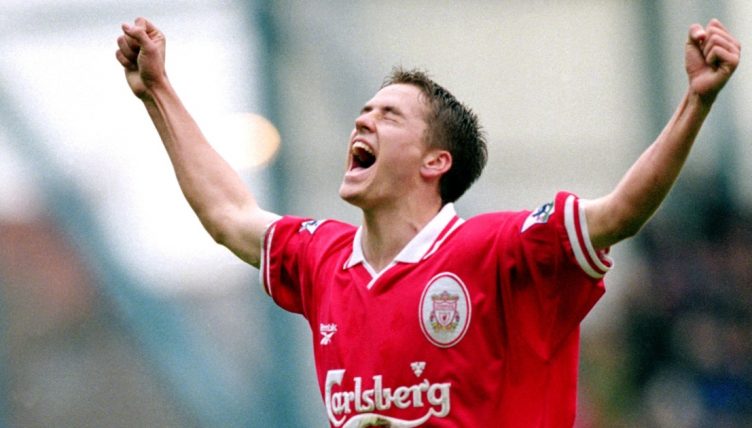 Michael Owen may not be the most popular figure in football, but we should never forget just how exciting he was when he broke through for Liverpool and England.

One of my Christmas presents when I was 11 years old was the official Michael Owen 1999 calendar, thanks to which Owen’s date of birth is etched permanently onto my brain.

It is full from start to finish (the calendar, not my brain) of safe, soft-focus shots of Owen sitting in what looks like a rich aunt’s living room or a mid-range wedding venue, wearing a variety of dull but well-made button-down shirts.

Frankly, nothing Owen has done in the 21 years since then has done anything to change my mental image of what he must be like off the field.

Even now, in my mind’s eye Owen could quite happily spend an afternoon at home sitting silently in his living room – lots of beige, paintings of horses on the walls – or mumbling a little running commentary to an empty room as he plays snooker against himself, taking enough genuine satisfaction from his eventual hard-fought victory to put him in a great mood for the rest of the evening.

He was the latest in a long line of exciting young players at Liverpool when he broke into the first team in 1997, joining academy graduates Robbie Fowler, Steve McManaman, Dominic Matteo and Jamie Carragher, as well as the likes of Jamie Redknapp and David James, who both joined the Reds at a young age.

Yet it was clear from early on that Owen was different.

It is hard to imagine him in the infamous white suits the side had worn for the FA Cup final less than a year before Owen’s debut, and impossible to imagine him dating a Spice Girl and becoming a tattooed fashion icon, like rising Manchester United star David Beckham.

Owen was the role-model your parents wanted you to have: young, clean cut, dedicated, but he was also a born winner who took a child-like joy from scoring goals.

When he scored his first for the senior team 20 years ago he really was still a child, coming off the bench to replace Patrick Berger with Liverpool 2-0 down away at Wimbledon on May 6, 1997.

Owen was just 17 years old at the time, but he showed no sign of nerves as he raced on Stig Inge Bjornebye’s through-ball ahead of Brian McAllister and slotted the ball right-footed into the bottom corner. 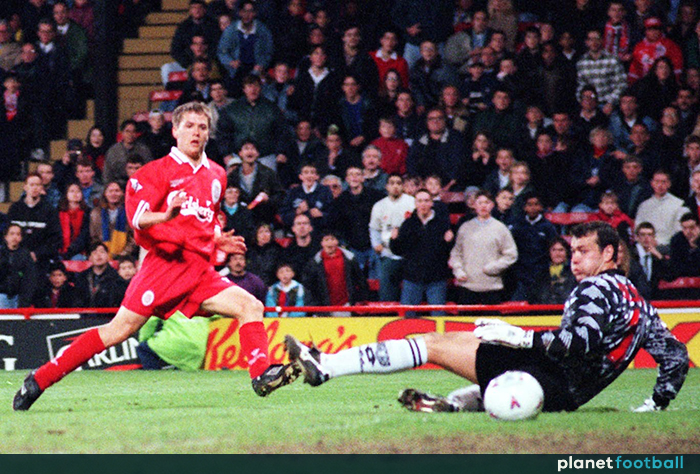 That would become a familiar sight for Liverpool and England fans over the next few years. Watching through the videos of Owen’s goals, it is incredible how often you think “well he must have been offside there”, before realising that he’s just that damn fast.

But not just fast. Owen played like the most accomplished rugby league wingers, springing into action from nowhere to take possession before streaking through on goal at phenomenal pace and delivering an unerring finish past the onrushing goalkeeper.

The devastating effectiveness of that incredible speed of foot and thought is best illustrated by the look on Gary Pallister’s face after been outdone by Owen in April 1998.

Owen beat Pallister over 30 yards despite the defender’s 10-yard head start, before dinking over Peter Schmeichel to cancel out Ronny Johnsen’s opener and earn Liverpool a draw.

United would go on to finish the season a single point behind Arsenal; Pallister was sold to Middlesbrough just three months later. 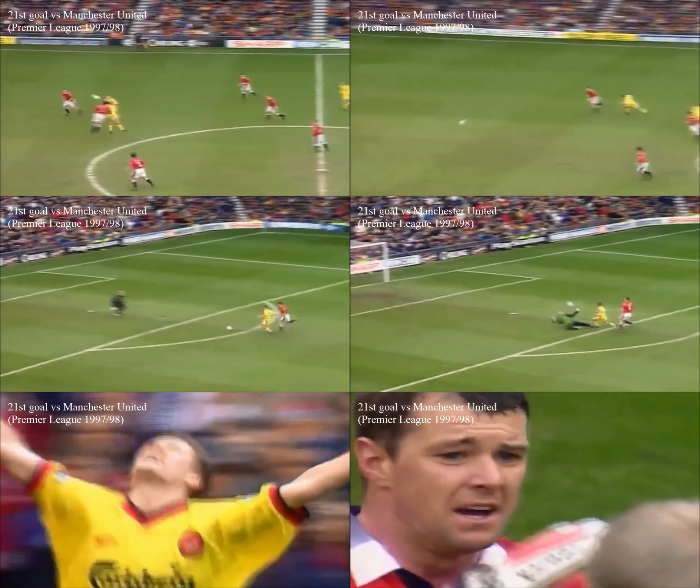 Despite Gerard Houllier’s safety-first approach, the presence of Owen in the side meant you were only ever one stray pass or ball over the top away from a sudden burst of electric excitement, made all the more enjoyable by the boyish grin that always followed.

Owen played like a child imagines themselves playing. Beyond the bare minimum necessary to shrug off the defender or shift the ball onto his right foot (though he was also proficient with his left, scoring 20% of his Liverpool goals with his weaker foot), there was nothing complex or intricate about his play.

He scored simple, straightforward goals, either at the end of another darting run behind the defence, or hammered first-time into the net through a crowded penalty box from 10 yards.

The simplicity of Owen both as a man and as a player, coupled with the unusual front-loading of the best years of his career, have left the impression of a one-dimensional player who would struggle with the demands placed on modern centre forwards. Not for Owen the graft of Roberto Firmino or the dazzling footwork of Luis Suarez.

But by mistaking simplicity for ease, we are doing a disservice to one of the most effective centre-forwards of the past 30 years. 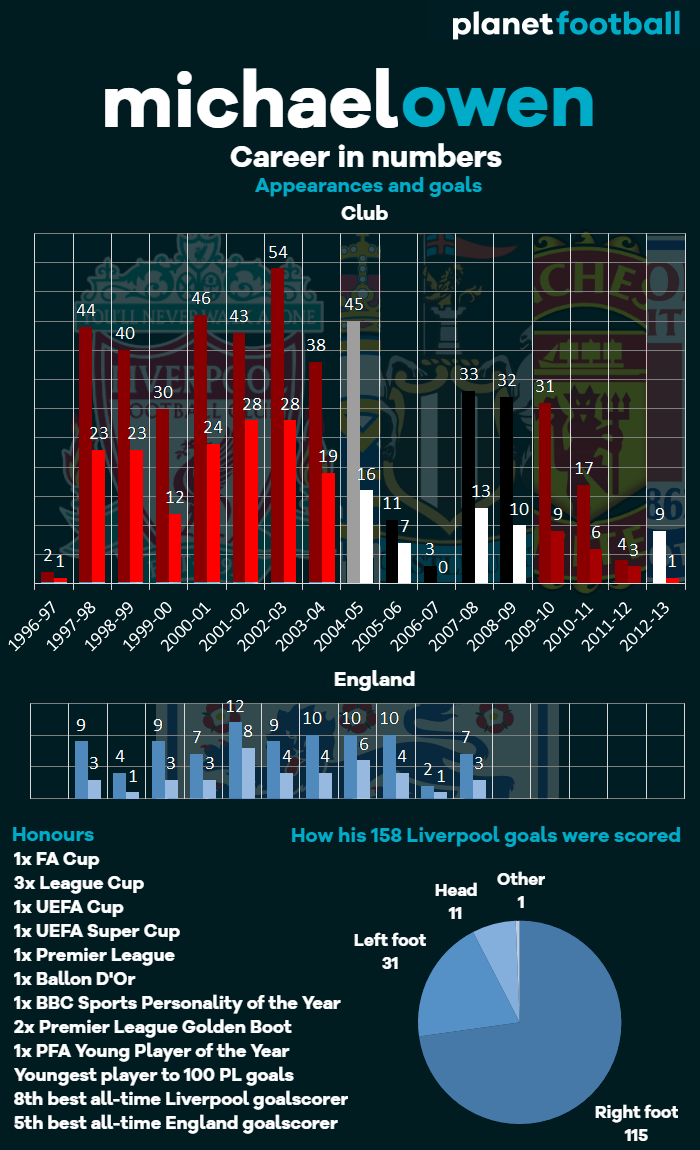 It wasn’t by accident that Owen became the youngest player ever to reach 100 Premier League goals, or that he created some of the most memorable moments of English football in the past 20 years: his goal against Argentina at the 1998 World Cup, his rapid-fire double to steal the FA Cup from Arsenal in 2001, his hat-trick against Germany in the 5-1 win in Munich later that same year, his opener against Brazil in the 2002 World Cup, his late winner in the Manchester derby in 2009.

He remains one of only four Englishmen to ever win the Ballon d’Or, with his 2001 award putting him alongside Stanley Matthews, Bobby Charlton and Kevin Keegan.

The last of those later managed Owen at Newcastle and was convinced that the striker could reinvent himself as a deep-lying playmaker, but it had always been obvious that Owen was motivated by the glory of scoring goals for big clubs – that was never going to work for him.

Owen admitted he would rather be warming the bench for Manchester United than starring for a lesser club, which led his career to peter out somewhat as he reached his late 20s and killed off much of the remaining affection Liverpool fans had towards him.

But we can get past that. Watching back through Owen’s 158 Liverpool goals and 40 England goals, it’s impossible not to feel like a starry-eyed 11-year-old again. That’s the Michael Owen we would all do well to remember.