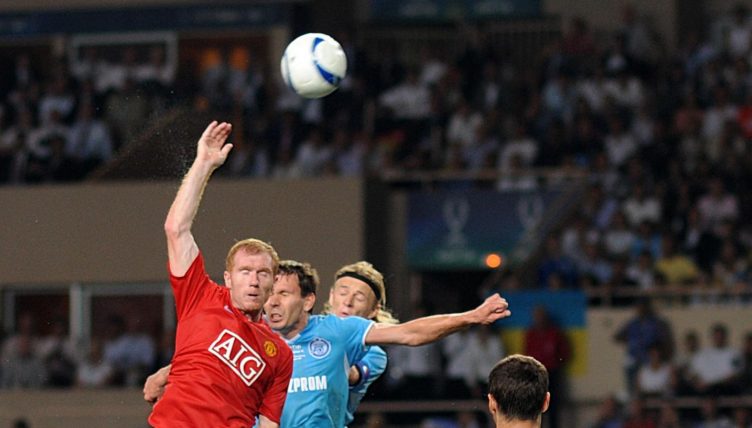 Despite being regarded as the ultimate professional throughout his Manchester United career, Paul Scholes wasn’t afraid to break the rules if it helped his side.

He picked up 97 yellow cards and four red cards in the Premier League, for starters, and as much as everyone liked to joke he couldn’t tackle, the reality was that Scholes could be a bit of a nasty bastard.

Indeed, he admitted as much himself. “Of course I can tackle,” he told 5 Live in 2011. “There’s plenty of evidence of me being able to tackle. I was just getting people back.

Arsene Wenger, for one, wasn’t fooled. “Who wouldn’t want a quality player like Paul Scholes in his team? But ask me if he’s been a fair player, I say no. I’m sorry, for me, he’s not been fair,” the then-Arsenal manager said in 2010.

“There’s a little bit of a darker side in him. I don’t like some things he does. It’s not because you are older suddenly that you are a saint.”

As well as seeking out revenge on anyone who dared to foul him, Scholes also had a petulant side to him and a habit of losing his head on the rare occasion a game wasn’t going his way.

Like, for example, in the UEFA Super Cup against Zenit Saint Petersburg when, with United trailing 2-1 and only a minute of normal time remaining, Scholes decided to take matters into his own hands. Literally.

He had a remarkable knack of scoring headers over the years considering his size and, when Wes Brown swung a cross into the Zenit penalty area, Scholes rose above everyone else once again to direct the ball into the far top corner.

The only trouble was he directed it, very bloody clearly, with his outstretched hand.

John O’Shea did his best to pretend everything was perfectly normal, but Scholes couldn’t even be bothered to do that. He still looked thoroughly pissed off.

Clive Tyldesley, commentating, wasn’t impressed: “I think he’s handled that in. There’s nothing funny about that at all. It’s a second yellow card and he’s off. What on earth was he thinking about?

“He does have these moments…from time to time he just seems to lose the plot.”

Scholes may have been a man of many talents, but if this was a genuine attempt to fool the referee, it was about as subtle as a bulldozer.

The thing is, it almost definitely wasn’t. This was Scholes, pissed off with his team-mates, pissed off that United were about to lose, throwing his toys out of the pram.

And you’ve just got to respect that. He’s the sort of person you can imagine turning a Monopoly board upside down when he gets stitched up by a cousin demanding rent on Mayfair on Christmas Day. And we’re all for that kind of petty shithousery.

There is also the very real possibility that, as well as being someone who wanted to win every game, Scholes was also the sort of player who couldn’t care less about the Super Cup. He probably wouldn’t have celebrated even if he’d scored an actual equaliser. Just a glorified friendly, innit?

Fergie certainly didn’t seem to care much after the game: “When someone gets sent off by punching the ball…it’s a bit unfortunate, it was an instinctive thing.”

Somehow, we don’t think Scholes got the hairdryer treatment this time.

Mind you, we’re not sure Fergie would have been quite as calm when Scholes was sent off for handball for a second time that season in a 2-0 defeat at Fulham…