When Pierre van Hooijdonk conquered Europe for Feyenoord all by himself 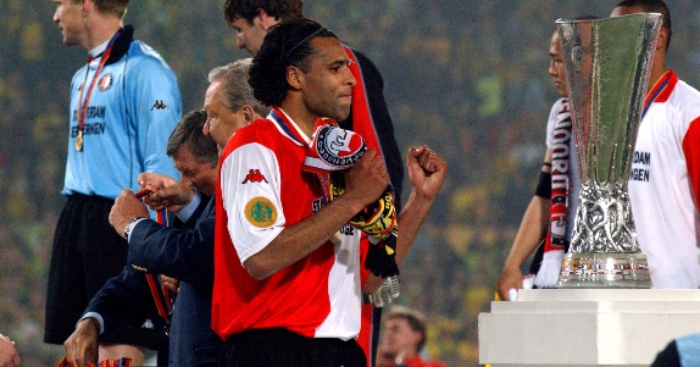 Occasionally in football, a player will grab his team by the horns and drag them to glory. Examples of such occurrences include Michel Platini in ’84, Diego Maradona in ’86, and less famously but no less extraordinary, Pierre van Hooijdonk in 2001-02.

Back in 2001, Dutch club football’s fall from grace, which it turned out would last a pretty damn long time, was underway. It had been four years since an Eredivisie side had made it to the knockout stages of the Champions League, and they hadn’t fared much better in the UEFA Cup.

Few would have expected Feyenoord to change things. The team, managed by Bert Van Marwijk, the man who would later oversee his nation sh*thouse their way to and through the 2010 World Cup Final, was nothing special.

Robin Van Persie was just an exciting youngster, while the likes of Johan Elmander, Glenn Loovens and Brett Emerton were hardly world-beaters.

They did, however, have Pierre Van Hooijdonk. As it turns out, they didn’t need much else…

There was little in their short-lived Champions League campaign to suggest Feyenoord would go on to enjoy any kind of European success that season.

They were entered straight into the group stages and were drawn alongside Bayern Munich, Sparta Prague and Spartak Moscow. Not an easy group by any means, but qualification seemed possible.

Two draws, three losses and just one win later, though, they finished third and entered the UEFA Cup, motivated by the fact that the final would be held on their own turf at De Kuip.

Their first UEFA Cup test saw them face German opposition in the shape of Freiburg, who had beaten Slovakian side Matador Puchov – heard of them? Nope, me neither – and Swiss team St. Gallen to make it to the third round.

Feyenoord were without Van Hoojdonk for the first leg in Rotterdam and struggled. Nevertheless, they did eventually find the crucial goal as Shinji Ono (no relation to Yoko) volleyed in from close range in with eight minutes to go.

Heading to Germany, Feyenoord knew a clean sheet would see them through to the next round. However, this went out the window when a young Sebastian Kehl tapped in at the back post after 22 minutes. Things would then go bad to worse as Freiburg scored from the spot just after half time to go ahead on aggregate.

Not to worry, though, because, in this match, Feyenoord had Van Hoojdonk, and he started his campaign as he meant to go on – with a barmy free-kick.

In the 57th minute of the game, he stood over a free kick in a position on the wide left that would have had fans shouting “don’t shoot for Pete’s sake!” Does Pierre care about you or Pete? Does he f*ck. Instead, he stepped up and drilled it into the far corner.

Feyenoord wrapped up the tie in the 86th minute when Leonardo scored a wonderfully scrappy goal. They were through.

Next up was a trip across the channel to Glasgow, where they’d face a Rangers side who had beaten PSG 4-3 on penalties in the previous round. Jay-Jay Okocha and Mauricio Pochettino missed for the French side; Ronaldinho, Mikel Arteta and Gabriel Heinze scored. It was a different time.

The first leg, much like against Freiburg, was goalless until late on when Ono struck to put Feyenoord 1-0 up and give them a precious away goal. This time though, they couldn’t hold on as Barry Ferguson equalised from the spot with nine minutes left on the clock.

Once again, the Dutch side just needed a clean sheet in the second leg to progress, and once again, said sheet was quickly dirtied with Rangers taking the lead after 25 minutes.

Just over 10 minutes later, Feyenoord were given a free kick on the edge of the box, which Van Hooijdonk casually slammed into the bottom left corner.

Then, on the stroke of half time, the team had enough free-kick, a little further out than the first, and Van Hoojdonk stepped up again.

Many would have thought “Mix it up, you can’t just beat the keeper with the exact same free-kick twice.” Does Pierre care? You know he doesn’t. He scored a carbon copy of his first to put his side on the verge of the quarter-finals.

He then set up Bonaventure Kalou, the older brother of Salomon, to put the team 3-1 up. Ferguson scored another penalty to set up a tense finish, but Feyenoord held on.

Shoot-outs and the San Siro

Feyenoord didn’t have to travel far for their quarter-final as they were drawn against domestic rivals PSV.

They made a strong start to the game in Eindhoven with both Van Persie and Van Hooijdonk hitting the post before the latter (who else?) tucked away a rebound to put Feyenoord ahead at the end of the first half.

The lead was short-lived though, as Chelsea legend (…) Mateja Kezman scored at the start of the second to level things up. Neither could find the winner so they headed west to Rotterdam with nothing to choose between them.

Here, Feyenoord’s European adventure came perilously close to ending. Mark Van Bommel, who would later become the son in law of the Feyenoord manager, put PSV ahead with 15 minutes left with a looping strike from the edge of the box.

However, Van (Hooijdonk) the man simply didn’t fancy heading home empty-handed and so headed in an Elmander cross in the 95th minute to keep his team alive.

Both teams failed to seize the initiative in extra time and before they knew it a penalty shoot-out was upon them. Feyenoord were faultless, and after Edwin Zoetibier saved PSV’s third, Van Hooijdonk buried the deciding penalty into the top corner to send The Netherlands’ second city wild.

Feyenoord, almost solely thanks to the heroics of Van Hooijdonk, had made it to the UEFA Cup semi-finals. Next up, though, were Italian giants Inter Milan, featuring the likes of Ronaldo, Zanetti and Seedorf. How on earth would Van Marwijk and co overcome this hurdle? If you’ve been paying attention, you can probably guess.

The first leg was played at the San Siro and it was unsurprisingly a backs-against-the-wall job for the Dutch side, even with Ronaldo on the bench. Nevertheless, they survived the first half and made the dream start to the second.

With 51 minutes on the clock, Van Hooijdonk picked up the ball on the right-hand side of the box and drilled it across the area. In an attempt to block it, Ivan Cordoba slid in and turned it into his own net.

Inter brought on Ronaldo and Seedorf in an attempt to peg Feyenoord back but couldn’t break through and headed to Rotterdam a goal down.

Feyenoord came out at De Kuip keen to put the tie to the bed as soon as possible. And 17 minutes in, excellent skill and trickery from Van Persie resulted in him putting in a cross from the left-wing straight onto the head of Van Hooijdonk, who simply shrugged Zanetti aside and made no mistake to score his sixth goal of the competition.

Jon Dalh Tomasson would then double the lead 20 minutes later to put them on the verge of returning home for the final. If only it were that easy…

Zanetti volleyed into the top corner in the 83rd minute before Mohamed Kallon tucked away a penalty in the 89th. One more goal and Inter would progress on away goals.

But Feyenoord held firm to spark celebrations that would’ve made many think they’d already won the competition. They hadn’t, but they were mighty close…

A date with Dortmund

Their UEFA Cup story was to end as it began, on home turf against German opposition. This time, though, the opponents were more formidable than Freiburg.

Borussia Dortmund, like Feyenoord, had overcome a Milan side, beating AC Milan 5-3 over two legs, to reach the final. With Jens Lehmann in goal and the Czech duo of Jan Koller and Tomas Rosicky leading the line alongside Marcio Amoroso, who had scored a hat trick in the semi-final, they headed to Rotterdam as favourites.

Feyenoord, meanwhile, were just 90 minutes away from their first European title since 1974, and knew that a few moments of magic could be enough to do it…but who could possibly provide such moments?

The Dutch side made a strong start, with a long-range lob from Ono going narrowly wide and Van Hooijdonk hitting the post with a free-kick. With his record from dead balls that year, Dortmund wouldn’t be foolish enough to give him another chance, right?

Wrong. With 30 minutes gone, Tomasson charged into the penalty area and was brought down by Jurgen Kohler. The German, in his last ever game, was shown red and Van Hooijdonk predictably slotted it in.

Pierre wasn’t done there, though. Just seven minutes later, Ewerthon gave away a free-kick a good 30 yards out and thumped the ball into the stands in frustration. He’d clearly been watching previous matches and feared what was about to come.

Quite right too. Van Hooijdonk subsequently swept the free-kick into the left corner of Lehmann’s goal to score his eighth of the competition. Half had been free-kicks.

Dortmund rallied in the second half, with Amoroso and Koller both scoring. Nevertheless, a goal from Tomasson sandwiched between them was enough to give Feyenoord the title, and there was only one man who could lift the trophy.

Without Van Hoojdonk’s goals, they would have lost every tie from the round of 16 onwards. No, really. Instead, they were European champions (sort of) and, to this day, are the only Dutch side to do so in the 21st century.

As well as a winners medal, Van Hooijdonk was rewarded with the title of UEFA Cup top scorer and a move to Fenerbahce, where he would be nicknamed Saint Pierre.

His run of form was considered so heroic, in fact, that some Feyenoord fans recorded a cover of the Black and White Brothers song “Put your hands up” named “Put your hands up for Pi-air” and it quickly became a huge hit. Give it a listen, it’s a banger.

In the space of seven months, Van Hoojdonk had single-handedly conquered Europe, brought joy to a city, topped scoring charts, topped music charts and scored some absolute thunderb*stards. Put your hands up for Pierre indeed.