The idea of Cristiano Ronaldo lining up alongside Lionel Messi might be the stuff of FIFA Career Mode dreams, but for 45 glorious minutes in the late 1997 fans got to see their equivalent play out for real.

A different Ronaldo took to the pitch that night alongside a very different Argentinean, but both represented strikers at the peak of their powers playing in what was then the best league in the world, Serie A.

Gabriel Batistuta had already carved out a reputation as one of Italy’s top marksmen by then, winning a Coppa Italia and Capocannoniere crown with Fiorentina during a helter-skelter six years that featured relegation, promotion, a European Cup Winners’ Cup semi-final and goals. Lots of goals.

Ronaldo, meanwhile, was just coming into his own in Italy, having arrived at Inter Milan from Barcelona earlier that summer for a world-record £17million. He was already making good on that price tag though with eight goals in his first 10 league games and would go on to rack up 25 in Serie A that season.

The first meeting of the pair at the San Siro in mid-September of that year had been a lively affair, with Inter edging out Fiorentina in a 3-2 thriller than saw both Ronaldo and Batistuta get on the scoresheet.

However, when the pair met again on a pitch in early December it was in markedly different circumstances.

In a time before the world’s best players were, perhaps sensibly, wrapped up in cotton wool, mid-season friendlies were an occasional oddity to be endured by managers and enjoyed by fans.

Yet the one organised on a cool winter’s night at the Stade Velodrome in Marseille was a bit special.

With the 1998 World Cup in France just a few short months away, representatives from each of the participating nations gathered for the tournament draw.

But rather than the usual prolonged process involving bits of paper in plastic shells, someone at FIFA had hit upon the genius idea of kicking things off with an all-star friendly pitting a team made up of players from Europe’s qualifying nations against one including stars from the Rest of the World.

For once, someone at FIFA had a genuinely good idea.

Players from every competing nation jetted in to France to join up with their respective teams for what was essentially a star-studded kickabout broadcast live on television around the world. 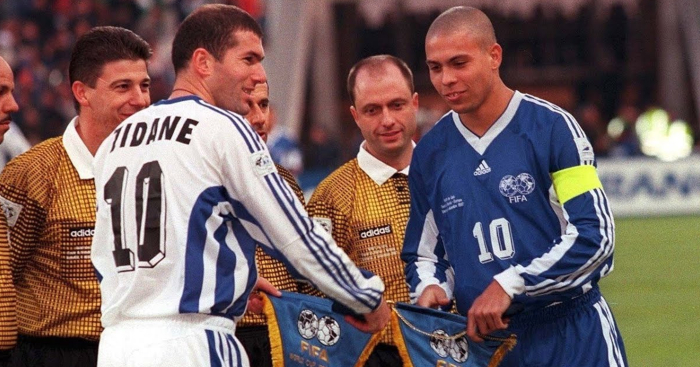 At first glance, the European side looked pretty impressive.

There was a centre-back pairing of Alessandro Costacurta alongside Fernando Hierro, Paul Ince marshalling the midfield alongside Zinedine Zidane and Patrick Kluivert partnering Alen Boksic up front.

There were weak spots, of course – Gordon Durie had no business being there – but it was impressive nonetheless.

The Rest of the World, by contrast, was made up of largely unheralded stars (this was before the days of Football Manager and the internet) save for the world’s biggest Asian star, Hidetoshi Nakata and Derby County’s Deon Burton.

Well, almost all of them were unheralded.

The minute Europe caught sight of Ronaldo and Batistuta lining up at the kick-off for the Rest of the World, all bets were off. It almost wasn’t fair.

That said, the Rest of the World got off to a slow start, with Romania’s Marius Lacatus pouncing on a defensive mix-up to put Europe 1-0 with just over a minute on the clock.

Lesser teams might have been affected by such a terrible opening but not this one.

Within a couple of minutes, Ronaldo was fired up, coming within inches of delivering a pinpoint through ball to his South American strike partner.

A few minutes later Batistuta returned the favour, riding a robust challenge from Paul Ince before laying the ball off to O Fenomeno who broke forward at speed, creating enough space before sending his shot wide. With less than five minutes gone, alarm bells must have already been ringing for their opponents.

While Zidane pulled the strings from the midfield for Europe, Ronaldo was also busy showcasing his own eye for a pass – an often-overlooked facet of the Samba star’s repertoire during those early golden years and one honed at Inter.

Batistuta, too, was continuing to find his the Brazilian, with one sublime slide rule pass putting Ronaldo through on goal again around the nine-minute mark.

Though Europe were holding their own in the midfield, every time the Rest of the World broke forward, they looked like scoring.

The inevitable happened on 16 minutes via a sublime through-ball from Ronaldo, who set up Colombia’s diminutive striker Antony de Avila – nicknamed ‘The Smurf’ in his homeland – for a well-taken equaliser.

The Brazilian’s pass might well have been among the game’s highlights, were it not for what followed.

Ronaldo was scarily good that night, setting the tempo, building play, passing with precision and finding Batistuta time and time again in the box.

On 21 minutes, he scored what can only be described as a textbook Ronaldo goal that will likely be shown to future generations when they ask teachers what football was.

Collecting the ball on the left-hand side of Europe’s box, he twisted Hierro inside out with a trademark stepover that left the Real Madrid icon for dead and created enough space for Ronaldo to slot the ball into the bottom corner with his left foot.

The speed and accuracy were unnerving – yet it was only the beginning.

Eager to show-off his own bag of tricks, Batistuta finally got in on the act around the half-hour mark, collecting the ball from Ronaldo on the edge of the Europe box before firing home, first time, with a whipped strike that left German goalkeeper and Euro 96 penalty hero Andres Kopke visibly stunned.

Somewhere, Gareth Southgate must have been smiling.

At this point, Europe were on the ropes with Ronaldo leading a seemingly relentless wave of counter attacks like a heavyweight champion pummelling an unknown upstart early in the first round – but there would be no early bell and respite for the South American’s victims.

On 36 minutes, Ronaldo was once again the provider, delicately lifting the ball over the teetering Europe defence for Batistuta who took one touch to control it on his hip before unleashing a thunderbastard of a finish that had Kopke praying for a linesman’s flag.

Though Europe rallied in the minutes that followed, the South American duo continued the torment with Ronaldo’s dribbling and Batistuta’s movement providing a constant headache to two of the world’s best defenders.

The inevitable fifth goal came on 42 minutes, via a sublime first-time pass from Batigol, who displayed a near-telepathic connection with Ronaldo to turn in his own half and hit an inch perfect pass for the Brazilian to run on to at speed.

Even then, Ronaldo had work to do, with Kopke bearing down on him with the air of a man desperate to avoid conceding five goals in one half.

But O Fenomeno had the speed of thought and ability to deal with him in the blink of an eye, gently nodding the ball out of the German’s reach before collecting and passing it into the empty net. (You really, really need to watch the replay of this from behind the goal.)

In the space of just 26 minutes, the Rest of the World had gone from 1-0 to 5-1 up by half time. Had the two sides continued at the same pace, then who knows what the final score might have been but it could have got ugly.

At half-time, Rest of the World manager Carlos Alberto Parreira made a substitution that remains the stuff of nightmares: Ronaldo off, Burton on.

They proceeded to lose a sedate second period 1-0 to Europe, with Zidane grabbing the only goal of a half that ended early so the draw could take place.

Not that it mattered one jot. For 45 glorious minutes, fans had seen the world’s best strike duo in action together. And it was glorious.