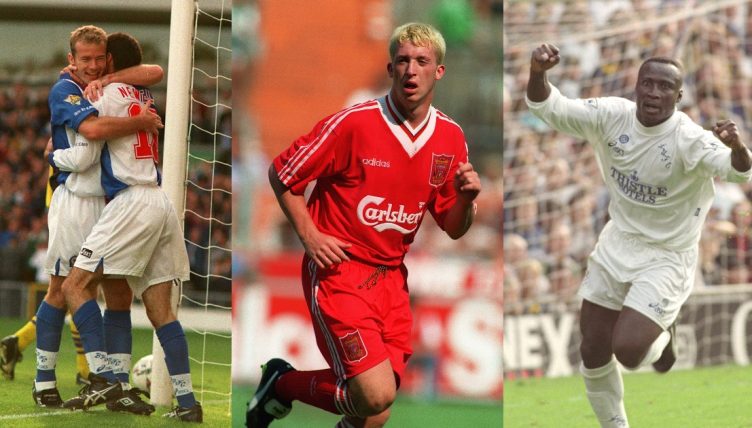 Mohamed Salah, Joshua King and Mason Mount all scored three goals this weekend, but that hallowed September afternoon in 1995 is the only time in the competition’s history it’s ever happened on the same day.

It’s fitting that the day featured three names that helped define that early Premier League period of the mid-90s, who have since gone on to be remembered as cult heroes if not outright legends at their respective clubs.

But in those early months of the 1995-96 season, the three players were still on the ascendancy to becoming icons of the Premier League.

Fowler had only just turned 20 that April and was coming off the back of a season in which he scored 25 Premier League goals (31 in all competitions) but there’d be greater heights to come with a career-best tally in 1995-96.

Yeboah had hit the ground running at Leeds after signing from Eintracht Frankfurt in January 1995, scoring 12 goals in his first 18 Premier League appearances, but his defining moments would come during this first full season.

Shearer was at the absolute peak of his powers, having scored 93 goals in his first three seasons at Ewood Park, including a career-best 34 in the Premier League in Blackburn’s title-winning 1994-95 campaign. He was arguably the best player in the world, and yet there was still his record-breaking move back to Newcastle and nearly 200 more Premier League goals to come.

Shaggy’s Boombastic was No.1 in the charts at the time, so stick that on (no, really, please don’t) and relive a period in which all three players were at their absolute pomp.

Fowler would finish the 1995-96 season as the second-highest goalscorer, the Toxteth-born striker forming a clinical strike partnership with Stan Collymore as Liverpool would only manage a third-place finish in the end after many had made them favourites for the title.

But that didn’t stop Fowler having a truly prolific season, showcasing his ability in this dominant four-goal performance against Bolton.

The first was simple, a ball from Jamie Redknapp playing Fowler through who calmly fired home to give Liverpool the lead.

Then a long kick from David James was seized upon by Fowler who headed the ball on before sliding it home. We’ll ignore where the hell Bolton’s backline was at this point – you can tell it was long before Sam Allardyce’s arrival.

His hat-trick came a minute after half-time. A gift of a goal, the ball bounced off a Bolton defender from a cross after Fowler had cooly dummied it, the ball returning right into the path of Liverpool’s No.23 almost as if he had played a one-two with the defender. He fired home to claim the match ball.

He was not done there, however. Fowler received the ball on the edge of the Bolton box from Steve McManaman in the 67th minute and coolly placed it in the bottom corner to complete the rout.

It would not be as successful a season as the previous one for defending champions Blackburn Rovers who ended up seventh in the final standings, but it was once again an all-year clinic in goal-scoring from Alan Shearer who notched up 31 league goals to take the golden boot.

He scored five (yes, FIVE) league hat-tricks in the 1995-96 season, the most scored by a single player in a single Premier League season. Remarkably, this meant nearly half of his league goals that season were part of hat-tricks and this was his first.

Shearer’s opening goal of the day was his 100th for Blackburn, a simple tap in following a flick-on from a corner in the eighth minute.

Mark Newell then gifted Shearer his second in the 60th minute, squaring the ball to the Geordie who fired into an empty net.

Just seven minutes later, Shearer secured his hat-trick. Newell was once again the provider, flicking a long ball into the path of his strike partner’s run, Shearer promptly firing hard and accurately into the bottom left corner.

This was also the first time in the Premier League that a player had scored a hat-trick with only one player assisting all the goals.

The Independent’s match report for Leeds’ trip to Wimbeldon quipped that “there were more chances for Leeds United at Selhurst Park yesterday than most Yorkshiremen have had hot baths.”

Thankfully for the Yorkshire side Tony Yeboah was there to make his chances count as he fired home three times to give Leeds three points on the road.

It was not to be a good season for Leeds, who slumped to 13th after two successive fifth-placed finishes the seasons before.

But Yeboah was constantly a shining light, with this hat-trick one of his finest moments as a Leeds player where he is still worshiped as a cult hero.

The Ghanaian’s first goal was a tap in, beating the defender to convert a cross home, but the second was stunning: the definition of a screamer – and what many consider to be the finest goal in Premier League history. 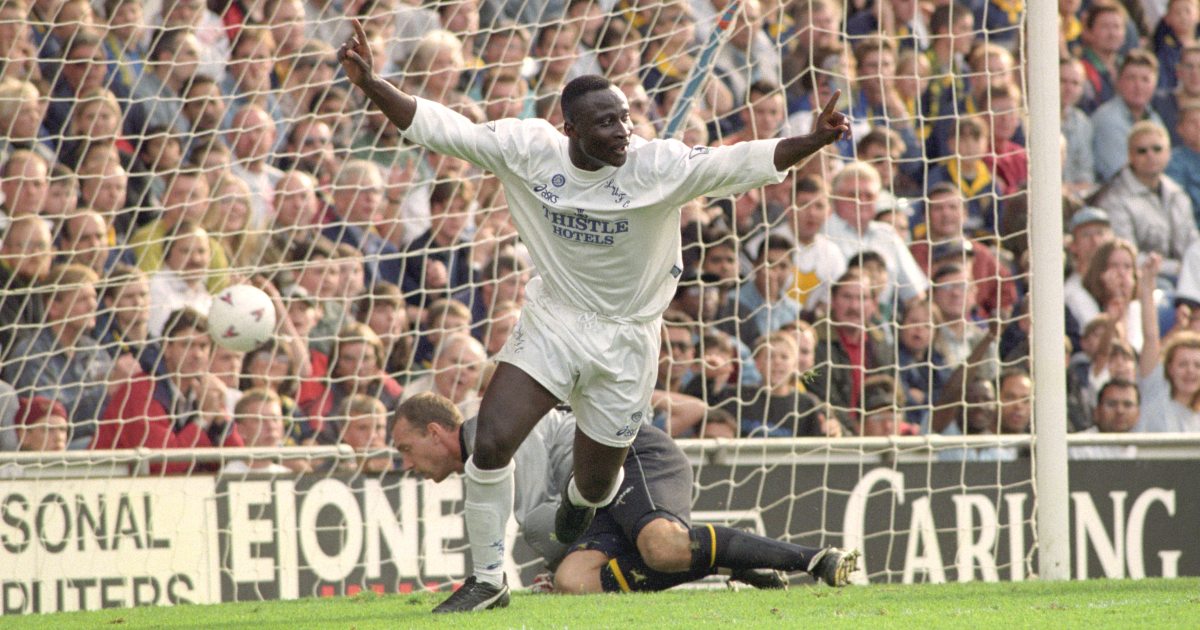 READ: A tribute to Tony Yeboah at Leeds United, King of the Thunderbastards

With the ball pinging from head to head, Yeboah took it on himself to bring the ball down. Controlling it with his chest he juggled it first onto his knee and then his foot before turning a Wimebeldon defender inside out and blasting it from outside the box as hard as he possibly could into the underside of the crossbar, the ball richoting of the crossbar into the ground and beyond the line, causing Martin Tyler’s voice to break as he commentated.

The third was simple in comparison, although still a well placed shot with his left from the edge of the box following a breakdown in play.

Unsuprisingly he finished Leeds’ top goalscorer that season, with 12 in the league. The only option for their Player of the Season award.

🚀 Tony Yeboah hat-trick incoming #OnThisDay in 1995, @LUFC were victorious in a 4-2 win over Wimbledon pic.twitter.com/SgE3ZF8deG