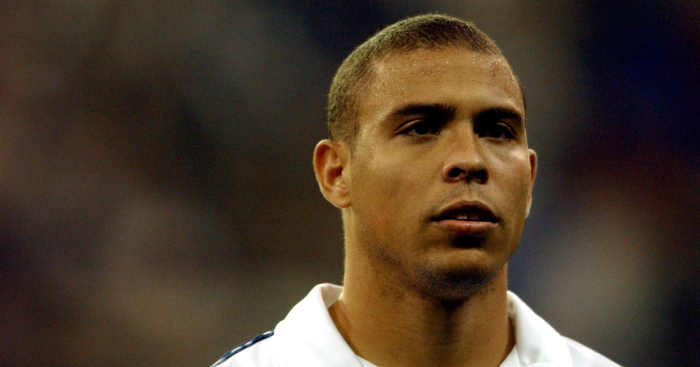 There have been few more ostentatious attempts at creating football’s equivalent of the Harlem Globetrotters than Real Madrid’s Galacticos – so it made perfect sense that they celebrated their centenary in 2002 with a fixture against a FIFA All-Stars XI.

Matches involving a FIFA World XI had been relatively common since an inaugural meeting against England to celebrate 100 years of the FA in 1963, but they now feel like a relic of a bygone era, with the clash against Real Madrid 17 years ago the last ‘official’ fixture.

If that is indeed the last time we will see such an occasion, it at least went out in a glitz of Hollywood glamour against a Real outfit who were the reigning champions of Europe and included the likes of Luis Figo, Zinedine Zidane and a Ronaldo still basking in all the glory of a World Cup triumph and a fantastically bold tuft of a haircut.

The All-Stars were also a far more illustrious group of players than those of previous editions. Two years earlier they had lined up against Bosnia featuring Egypt stalwart Ibrahim Hassan and former Coventry midfielder Mustapha Hadji, whereas at the Bernabeu they counted upon the names of Cafu, Paolo Maldini, Michael Ballack, Rivaldo, Miroslav Klose and Kaka.

“This is basically a collection of the world’s very best players, and the chance to see them on the same pitch at the same time comes once in a blue moon, doesn’t it?” said Steve McManaman, the only English representative following the withdrawals of David Beckham and Michael Owen due to injury.

Prior to kick-off, Ronaldo took to the field to parade the World Player of the Year award he had collected after receiving over double the amount of voting points as his nearest contender, Oliver Kahn. In fact, Kahn was rumoured to have withdrawn from the event as he was so angry at being overlooked.

Whenever O Fenomeno received possession, the 55,000-strong crowd became audibly more excited. But the All-Stars, coached by Ronaldo’s international boss, Luiz Felipe Scolari, quickly decided to piss on their opponents’ chips with some languid brilliance of their own.

Around the half-hour mark, a lovely cross-field ball from Hidetoshi Nakata found Roberto Baggio, who floated a delightfully lazy cross into the box, allowing Klose to display his predatory instincts and steal in to score with a diving header.

And before the half was over, the All-Stars made things even more awkward by doubling their lead as Kaka slalomed his way to the edge of the box before picking out the bottom corner against the club he would go on to join as one of a second wave of Galaticos seven years later.

For both goals, Real were reduced to the frustration of seeing your painstakingly-assembled FIFA Ultimate Team dismantled by a child prodigy who has used his parents’ money to fill a squad with legends cards.

Things started to get embarrassing after the break, as substitute Aliou Cisse – the sole representative from the joyous Senegal side which stunned reigning champions France on their way to the quarter-finals of the World Cup – played a one-two on the edge of the box and held off some flimsy defending to make it 3-0.

While the fixture was obviously a glorified friendly, Real’s backline couldn’t help but hold their heads in shame as a Birmingham City player, and the only man from the Premier League, danced his way through to score at the Bernabeu.

You could hardly blame Vicente Del Bosque’s men for not taking the occasion completely seriously. The match was played three days after they were forced to come back from 2-0 down to beat Recreativo Huelva 4-2, and three days later they would have to travel to Malaga as they fought for the La Liga title.

But something about being 3-0 down at home to a swiftly-assembled group of players who had never played together before clearly stirred something within the men in white.

Santiago Solari pulled a goal back, rifling a penalty into the top corner after being pulled back inside the box.

And the comeback gathered pace in the 65th minute as a shot was spilled into the direction of Tote Lopez, a Madrid-born youngster for whom this represented his only ‘goal’ for the club.

Lopez appeared just five times for Real Madrid in La Liga but eventually found a home at second-tier outfit Hércules, only to have his career blighted by a serious knee injury which forced him to retire early.

It is somewhat ironic *this* Real Madrid side equalised against a team of All-Stars through a player who would ultimately leave the Bernabeu because he felt he did not fit in with the Galaticos.

In the 85th minute, Esteban Cambiasso collected the ball 25 yards from goal and fired the ball into the bottom corner in what would be one of only two goals he scored for the club across two spells.

Cambiasso would have to leave Real Madrid in 2004 for Inter, where he would have been a contender for any hypothetical World XI on account of his supreme tactical nous and efficiency rather than eye-catching flair.

And the midfielder bemoaned the folly of the Galacticos in an interview with Marca in 2017: “Already in the first team, the politics of the moment meant that most of the side were made up of academy players and Galacticos, and I wasn’t either of those.”

“There was no continuity for my characteristics,” he went on to add, “and I drew more attention being absent from the starting line-up than being present.

“Makelele was the same. He was not considered until he left. We are players who do a lot of work for a team and when we leave, it shows.”

There is the opportunity to look at the fixture in one of two ways: a lesson in the hubris of footballing vanity, or – the take we prefer – just the opportunity for quite a lot of fun. Like Soccer Aid, but with Ruben Baraja patrolling midfield rather than Jonathan Wilkes.

And we don’t want to suggest being able to practise another comeback helped Real Madrid win La Liga, but three days later Los Blancos travelled to Malaga and scored three second-half goals to overturn a 2-0 deficit and grab all three points.

The outcome at the end of the season? Real won the league by two points.