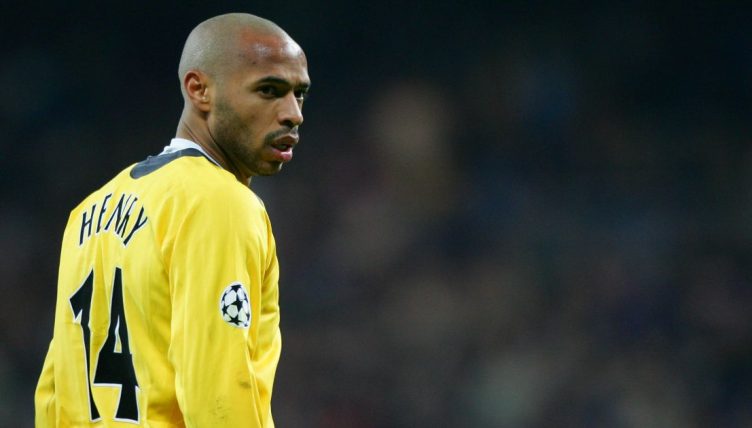 In a 2012 interview with Puma, Thierry Henry was asked whether he was as cool off the football pitch as he was on it.

His response was distinctly uncool, at least initially. He took a deep breath and nervously giggled. But then he started to talk about how he felt on the pitch.

“I always said to myself, ‘You shouldn’t panic. You have the ball. Why should you panic? Everybody should panic. Not you.'”

Thierry Henry was quite possibly the most French footballer of all time. He could score goals with effortless ease. He was frighteningly quick without ever looking like he was straining himself.

Even now, when he speaks, he speaks with that deep cadence that makes you suspect he could fall asleep at any moment.

When Real Madrid hosted Arsenal in February 2006 for the first leg of the Champions League round of 16, we reached peak Thierry Henry.

It may have been the tail end of the Galacticos, but Real could still field a starting XI that featured Iker Casillas, Roberto Carlos, David Beckham, Zinedine Zidane and Ronaldo. In the second half, they could even call on Raul to replace Robinho.

If Arsene Wenger wanted to change his strikers, he had the choice of a 16-year-old Theo Walcott or a 19-year-old Arturo Lupoli, both of whom were yet to play in the Premier League.

But Arsenal triumphed 1-0, mainly due to the brilliance of Henry. We’re not even here to talk about his goal, when he collected the ball just inside the opposition half and nonchalantly burst through the entire Real Madrid defence to score on his weaker foot without ever looking like he was trying particularly hard.

Who remembers when Thierry Henry did this to Real Madrid? 😳pic.twitter.com/Zs6VWXSOZ5

No, we’re here to talk about a moment in the 93rd minute, when Arsenal were hanging on to their 1-0 lead ahead of the return fixture at Highbury.

Henry was stood a good 15 yards inside his own half on the right wing, but that still made him the Gunners’ furthest forward player, and his presence was enough to attract the attention of four Real defenders.

When the ball came his way and he was all alone with only white shirts for company, he didn’t panic. He had the ball. Why should he panic? Everybody should panic. Not him.

Sergio Ramos was the first to go, somehow skipped past without even getting anywhere near Henry.

Roberto Carlos’ little legs soon gave up all hope of ever catching up with the quickly disappearing No.14.

The unenviable task of preventing Henry holding the ball up in the corner to waste precious time then fell to Alvaro Mejia, a rookie defender who replaced the unsurprisingly-injured Jonathan Woodgate after nine minutes.

Henry was never going to stop and take pity on his next victim. Indeed, he prolonged the torture by briefly shaping to head towards goal, only to instead carry on sauntering to the corner flag.

Mejia resorted to diving in, allowing Henry to produce his next trick by gently nudging the ball ahead and hurdling the tackle without even looking at the defender.

If there was any justice in the world, the referee would have stopped the game there and then to allow Real Madrid a fourth substitution so Mejia could leave the field and spare himself any more torment.

Sadly, he was forced to jostle with his master in a scene akin to a toddler trying to tackle his dad, eventually toe-poking the ball out of play to gift Arsenal a throw-in deep in the opposition half.

Henry’s reaction may just be the coolest he – or any other footballer – has ever looked on a football pitch.

There isn’t a hint of emotion, but then… is that a wink? There’s definitely a cheeky wave to the Real Madrid fans behind the goal who have absolutely had enough of this shit.

You can’t blame them; it’s never nice being schooled in your own backyard. But sometimes, you just have to sit back and appreciate the lesson you’ve been taught.