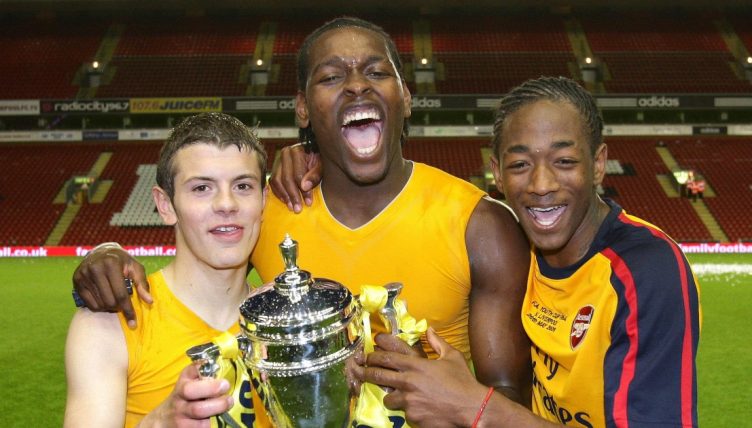 Arsenal’s run to the FA Youth Cup final back in 2018 was notable, even if they did end up losing heavily to a Callum Hudson-Odoi-inspired Chelsea.

It was notable for being the Gunners’ first appearance in the showpiece since way back in 2009 when they blew away Liverpool with a 4-1 first-leg victory before wrapping things up with a 2-1 win at Anfield.

While several members of the squad went on to turn out for Arsenal’s first team, none remain at the club in 2022. Here’s what they’re all up to now.

Shea is one of those who never made the first-team breakthrough, but with young talents Lukasz Fabianski, Vito Mannone and Wojciech Szczesny ahead of him in the queue, it’s understandable.

He actually dropped out of league football altogether after leaving the Emirates Stadium but has rebounded and is now very much on the way up.

Still just 30, the Englishman has been something of a stalwart for Luton Town, and was an ever-present in their League One-winning campaign of 2018-19, before falling down the pecking order following their return to the Championship.

Eastmond’s Youth Cup exploits earned him an Arsenal first-team debut in October 2009 when he was given 75 minutes in a League Cup victory over Liverpool, and he played a handful of Premier League games that same season, starting at Bolton and Wigan.

However, that was as good as it would get for the London-born player, who left for Colchester United in 2013 after a series of loan spells.

He did return to face Arsenal in 2017, though, playing the full 90 for Sutton United, where he remains, when they took on his former club at Gander Green Lane in the fifth round of the FA Cup.

Eastmond has made over 200 appearances for the Us and now captains them in League Two.

Local lad Cruise only played once for the senior side, in a Champions League dead rubber away to Olympiacos in 2009.

He kept his career going with Torquay, but injuries plagued him throughout his short career and he would eventually hang up his boots early to begin training as an accountant.

“I’ve always been really good with numbers, so the decision to choose accountancy was a no-brainer,” he said after beginning his studies.

Bartley was also part of that back four in Greece (Kerrea Gilbert and Mikael Silvestre were the other two) and, like Cruise, it ended up being his only Gunners game.

However, unlike his colleague, Bartley’s next permanent move kept him in the Premier League with Swansea City, for whom he played 38 games in all competitions.

After a number of loan moves away from South Wales, he joined West Brom in the summer of 2018 and has been a regular for the Baggies as they’ve flitted between the top two tiers.

One of the Youth Cup champions who arrived on the first team scene with a decent profile, Frimpong looked for a while as if he’d have genuine staying power at Arsenal.

He had to wait a little longer than others for his chance, making his first-team bow on the opening day of the 2011-12 season, but the central midfielder played 14 times that season for the Gunners and a further five on loan at Wolves.

While he might have seen that breakthrough as the start of a long career in north London, it would prove to be the beginning of the end. He didn’t play a single Premier League minute after returning from Molineux and, after spells in Russia, Sweden and Cyprus, injuries prompted his retirement in 2019 at the age of just 27.

Full-back Ayling joined Arsenal as a 10-year-old and worked his way through the ranks but was never rewarded with a first-team appearance.

He has had to work his way back up through the Football League pyramid to finally find himself within touching distance of the Premier League bow he will have hoped to earn in a Gunners shirt.

After spells at Yeovil and Bristol City, Ayling has become a Leeds United stalwart, outlasting multiple managers to find himself one of Marcelo Bielsa’s most trusted players. It’s been quite the rise for the right-back to eventually become a Premier League regular.

Lansbury was one of the most talked-about members of this Arsenal generation, and not just because he was a north London lad.

The classy midfielder had played several first-team games before the Youth Cup final, making his debut as a 17-year-old and spending much of the 2008-09 season at Scunthorpe, for whom he scored four times.

Several loan spells later, he dropped down to the Championship without realising his potential in a red shirt, though he did put in a fine performance in goal for West Ham.

A perenially second-tier player, Lansbury is now turning out for Luton and most recently received attention for doing this.

Was Henri Lansbury lucky to get away with just a yellow card for this kick against Swansea this afternoon? 🤯
pic.twitter.com/cof7jTqZR6

If you were to pick a player from the Youth Cup XI to make more than 150 appearances for Arsenal, Coquelin would not have been top of the list.

This feeling would only have strengthened when the midfielder was sent on loan to Championship Charlton Athletic in November 2014. But injuries and luck gave him an opportunity he would grasp with both hands, with a masterful performance in a win at Manchester City in January 2015 the highlight.

He would eventually leave north London in January 2018, joining Valencia in an eight-figure deal, and he since became a regular when fit for the Champions League chasers ever since. Nowadays he turns out for Unai Emery’s Villarreal.

Arsenal have had a fair few French forwards turn out for them in the Premier League, but Sunu did not add his name to the list.

The Châteauroux-born attacker played twice in cup competitions – a start against West Brom in the League Cup and a sub appearance in the aforementioned Olympiacos defeat – before leaving for Lorient in 2011 without finding the net for Arsenal’s first-team.

Now plying his trade in the French lower leagues with Chateauroux, the former France Under-21 international is playing his senior international football for Togo.

The jewel in the 2009 crown, Wilshere had already played eight senior Arsenal games before the 2009 final, despite not turning 17 until the January of that year.

His recent injury troubles have been well-documented, but he did at least have a few memorable seasons and performances, not least his display against Barcelona in 2011.

His career hasn’t quite gone as planned, with a spell back training with Arsenal as an unattached player, and he’s since made the eyebrow-raising move to Danish club AGF.

Arsenal’s captain in the final wasn’t any of the midfield men but rather England Under-19 man Emmanuel-Thomas.

The London-born forward would make his Gunners debut the following season, starting against Stoke in the FA Cup, but would spend most of that season getting regular football out on loan.

He left Arsenal in 2011 with just nine Premier League minutes to his name and would go on to enjoy the best years of his career at Bristol City, scoring 21 goals in his first season for the club.

After two years at Ashton Gate he joined QPR, before a spell in Thailand with PTT Rayong. The forward now turns out for Aberdeen, after a fruitful spell with Livingston.

A substitute in the first leg and a starter in the second, Watt scored on his debut in a cup victory over West Brom but would not add to that solitary strike.

After several loan spells away from the Emirates – including a promotion-winning stint at Leeds – he eventually left on a free when his contract expired in 2013 and has been dropping further and further down the pyramid since.

Watt was last seen turning out for Wealdstone, while he became part of non-league folklore for his part in a hilarious misunderstanding with a referee back in 2018.

The phantom red card at @hemelfc

This seemed to happen:

The Ref asks Sanchez Watt for his name.

Watt gives it repeatedly but the ref hears it as ‘What? What?’

The ref shows him a red for dissent.

Parkes explains to the ref who rescinds the card.